The Goal – Obtain a College Education 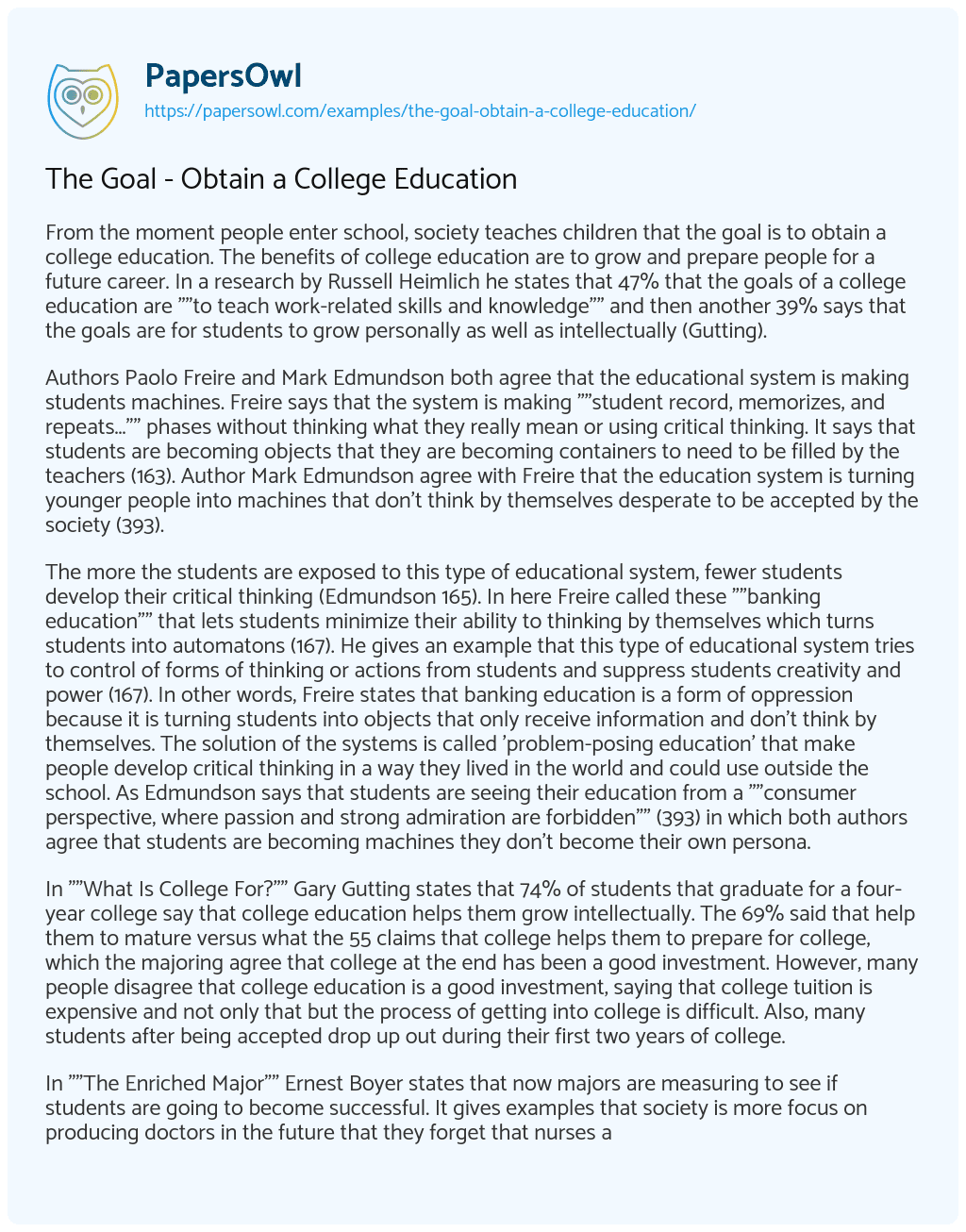 Authors Paolo Freire and Mark Edmundson both agree that the educational system is making students machines. Freire says that the system is making “”student record, memorizes, and repeats…”” phases without thinking what they really mean or using critical thinking. It says that students are becoming objects that they are becoming containers to need to be filled by the teachers (163). Author Mark Edmundson agree with Freire that the education system is turning younger people into machines that don’t think by themselves desperate to be accepted by the society (393).

The more the students are exposed to this type of educational system, fewer students develop their critical thinking (Edmundson 165). In here Freire called these “”banking education”” that lets students minimize their ability to thinking by themselves which turns students into automatons (167). He gives an example that this type of educational system tries to control of forms of thinking or actions from students and suppress students creativity and power (167). In other words, Freire states that banking education is a form of oppression because it is turning students into objects that only receive information and don’t think by themselves. The solution of the systems is called ‘problem-posing education’ that make people develop critical thinking in a way they lived in the world and could use outside the school. As Edmundson says that students are seeing their education from a “”consumer perspective, where passion and strong admiration are forbidden”” (393) in which both authors agree that students are becoming machines they don’t become their own persona.

In “”The Enriched Major”” Ernest Boyer states that now majors are measuring to see if students are going to become successful. It gives examples that society is more focus on producing doctors in the future that they forget that nurses are also needed (Boyer 2). In other words, Boyer states that the career preparation experience is to major in a subject that would get a secure job. Boyer and Gutting both agree that college education is important for students to discover themselves, to develop people their “”intellectual culture as essential to our society”” (Gutting 45). Both agree that students such open themselves to new ways of learning and different perspective of seeing the world that could help society (Boyer 3).

C.H. Knoblauch and Mark Edmundson’s articles both argue that literacy education promises socioeconomic benefits. Knoblauch’s “”Literacy and the Politics of Education,”” said that cultural literacy argues the importance of reading which benefits ethnic heritages and socioeconomic interests (4). It also argued that literacy privileged groups dominate the less educated (6). Another argument is that education left of personal growth, which Knoblauch states that the abilities of reading and writing become the ability to let people develop their critical thinking (6). Edmundson states that the student’s mind has developed into a consumer mentality, that their passion is not as important as the benefits of socioeconomic. How is that society expect from young people to major in something they love if maybe is not good enough for a job? Why does society complain that millennials have a lack of emotions? How are that many young people are easy to manipulate by adults and believe everything they say? How is that society quickly determine who the person is based on their level of education?

The main goal of a college education is to develop a deeper critical thinking and socioeconomic benefits. A college education is important because is the main path to develop critical thinking. As Freire states that the education systems are making students into automatons (Freire 167). The systems are making students memorizing and repeats phases with not really thinking the meaning (Freire 167). A college education was to break what the system education in grade school made students minimize their creative power and to oppress students. By breaking the rule of the system that is easier to manipulate young people to make them believe what is right and wrong. Students with college education break the path of making students automatons. One of the solutions that Freire says is that “”is not to ‘integrate’ them into the structure of oppression, but to transform that structure so that they can become ‘being for themselves'”” (165). The solution could break the way adult manipulate young people and make them think by themselves that would make students seen the reality of the world. As students receipt a better high education it would break as Freire says young people would get control of their thinking and actions (167). The main goal for a high education in Freire is, “”Education as the exercise of domination stimulates the credulity of students, with the ideological intent of indoctrinating them to adapt to the world of oppression”” (168). Which mean that this is making students think by themselves and lived in the world where we are taught to believe everything that we are told without questions. Another goal of a college education is to obtain a better benefit in socioeconomic.

As Gary Gutting said in his article many students see that having a higher education is a “”good investment”” (9) not everyone agrees. Many graduate students said that college was “”good investment”” because at the end they obtain a high paid, have the resources to go in the real world to fight and have better opportunities that others couldn’t (9). Is not just the financial investment but also personally, college education gives students the opportunity to be exposed to a different point of views, religions that help understand each other.

There is some disadvantage for higher education ones that Gutting states, “”it’s too expensive, admissions policies are unfair, the drop-out rate is too high”” (13), let too many people decide to don’t attend college. Many people decide that the loans are not an option, is easier to don’t try. The cost of the college is too high because as Gutting says that a high amount of the tuition goes to semi-professional athletics, fancy dorms, student centers, and unneeded administrators (15). Society is populated by people that have a college degree. However, as

The goals of a college education for many students that are the first generation is to have a job where they can support their parents. Edmundson says that the educational systems are making students see their education with “”consumer perspective”” (393) which is true given that if you don’t have the resources, people can’t do anything. In others, words like Knoblauch says that “”the literate claim authority to set the terms of survival and success”” (2) because it gives people the tools to a higher thinking. As the liberal argument is the same idea that one of the goals of college is “”for personal growth, finding voices in the process-writing… or in the various practices of personalized learning””, which mean that it helps people develop their power of imagination that gives the ability to speak up, to lead society to a better progress with social changes (Knoblauch 5). College education it helps people think critically, to make people find their voices and speak up for themselves and others, “”identify with a critical consciousness of the social conditions in which people find themselves…”” (7). It helps to realize what are the social conditions are an outside people little world.

The Goal - Obtain a College Education. (2019, Apr 29). Retrieved from https://papersowl.com/examples/the-goal-obtain-a-college-education/