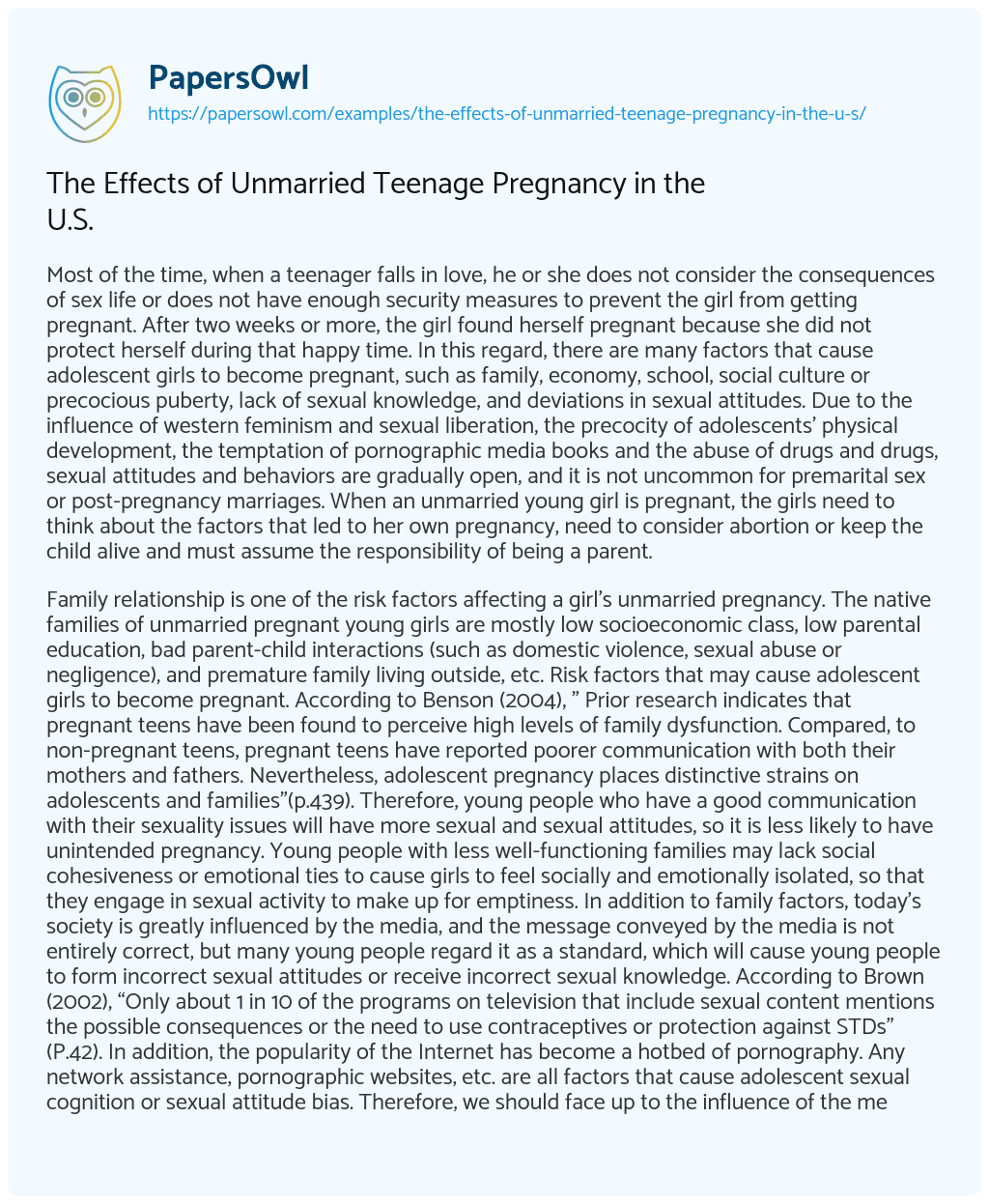 Most of the time, when a teenager falls in love, he or she does not consider the consequences of sex life or does not have enough security measures to prevent the girl from getting pregnant. After two weeks or more, the girl found herself pregnant because she did not protect herself during that happy time. In this regard, there are many factors that cause adolescent girls to become pregnant, such as family, economy, school, social culture or precocious puberty, lack of sexual knowledge, and deviations in sexual attitudes. Due to the influence of western feminism and sexual liberation, the precocity of adolescents’ physical development, the temptation of pornographic media books and the abuse of drugs and drugs, sexual attitudes and behaviors are gradually open, and it is not uncommon for premarital sex or post-pregnancy marriages. When an unmarried young girl is pregnant, the girls need to think about the factors that led to her own pregnancy, need to consider abortion or keep the child alive and must assume the responsibility of being a parent.

Family relationship is one of the risk factors affecting a girl’s unmarried pregnancy. The native families of unmarried pregnant young girls are mostly low socioeconomic class, low parental education, bad parent-child interactions (such as domestic violence, sexual abuse or negligence), and premature family living outside, etc. Risk factors that may cause adolescent girls to become pregnant. According to Benson (2004), ” Prior research indicates that pregnant teens have been found to perceive high levels of family dysfunction. Compared, to non-pregnant teens, pregnant teens have reported poorer communication with both their mothers and fathers. Nevertheless, adolescent pregnancy places distinctive strains on adolescents and families”(p.439). Therefore, young people who have a good communication with their sexuality issues will have more sexual and sexual attitudes, so it is less likely to have unintended pregnancy. Young people with less well-functioning families may lack social cohesiveness or emotional ties to cause girls to feel socially and emotionally isolated, so that they engage in sexual activity to make up for emptiness. In addition to family factors, today’s society is greatly influenced by the media, and the message conveyed by the media is not entirely correct, but many young people regard it as a standard, which will cause young people to form incorrect sexual attitudes or receive incorrect sexual knowledge. According to Brown (2002), “Only about 1 in 10 of the programs on television that include sexual content mentions the possible consequences or the need to use contraceptives or protection against STDs” (P.42). In addition, the popularity of the Internet has become a hotbed of pornography. Any network assistance, pornographic websites, etc. are all factors that cause adolescent sexual cognition or sexual attitude bias. Therefore, we should face up to the influence of the media or the Internet and control or try to correct it.

Unmarried girls need to consider whether she wants to have an abortion or give birth to a child. Research by Miller and Coyl (2000) said “There are many reasons why women choose to have abortions. Rape, incest, and concern about health of the mother are among the most publicized, but somewhat less common, reasons for abortion” (p.12). Therefore, girls need to consider various factors to decide whether to have an abortion. Many teenagers do not want to assume the responsibility of being a parent at this stage of their lives and they want to keep their sex or pregnancy secret, so they may choose to have an abortion (Donovan, 1995). If the girl who has pregnant chooses to go to abortion. Then, they might have to accept the risk of abortion. Because of the fact they are too young. They may have a surgical risk when they are doing abortion. If the girl chooses to give birth to the baby. Therefore, when babies grow up in their belly, they need to start thinking about how to take care of themselves. Because these girls don’t have the experience of getting pregnant, they will be overwhelmed when they first get pregnant, so they don’t pay attention to the baby and their own nutrition problems, so they should establish a good concept of pregnancy to protect themselves and their babies.

If the unmarried teenage pregnancy girls want to give birth to the baby, they must assume the responsibility of being a parent. The girls must have a mindset that they will be a mother after nine months. There are many parts of mindset that they need to learn. For example, how to feed the baby in a correct way? How to notice that is the baby has the fever or not? There are too many problems which the girls need to learn. Also, they need to start think the resources of money. If they do not have money, they can not afford to raise the baby. According to Arthur (1996) “Raising a baby means medical costs, clothing, food, entertainment, toys, education, equipment, and babysitting. As children grow, their needs change, and your expenses change and increase along with those needs.” (pp.132-133). When a baby born, there are various of necessarily have to buy. For example, babies’ bottles, clothes, and the baby bed. So when the baby is born, if the girl does not marry the baby’s biological father, the girl herself is very difficult to afford the huge cost of baby care. If the girl is still in school and is not married, she will not be able to go to school, take care of children and make money at the same time. Fortunately, there are relief policies in the United States in order to let these unmarried young girls take good care of their babies. Because of the birth of a baby, responsibility has become the mission of these unmarried young girls, and because of the responsibility, these girls have really grown a lot.

There are too many influences to impact the unmarried teenage pregnancy girls. But, the first step for them to do is build a positive psychological when they have pregnant. If they do not have a positive thought. However, all the problems they might not to solve and face. This is a notice for every teenager, when you are not ready to be a mother, please protect yourself from becoming pregnant.

The Effects of Unmarried Teenage Pregnancy in the U.S.. (2021, Jun 05). Retrieved from https://papersowl.com/examples/the-effects-of-unmarried-teenage-pregnancy-in-the-u-s/

Why Teenage Pregnancy should be Prevented