The Negative Effects of Teen Pregnancy 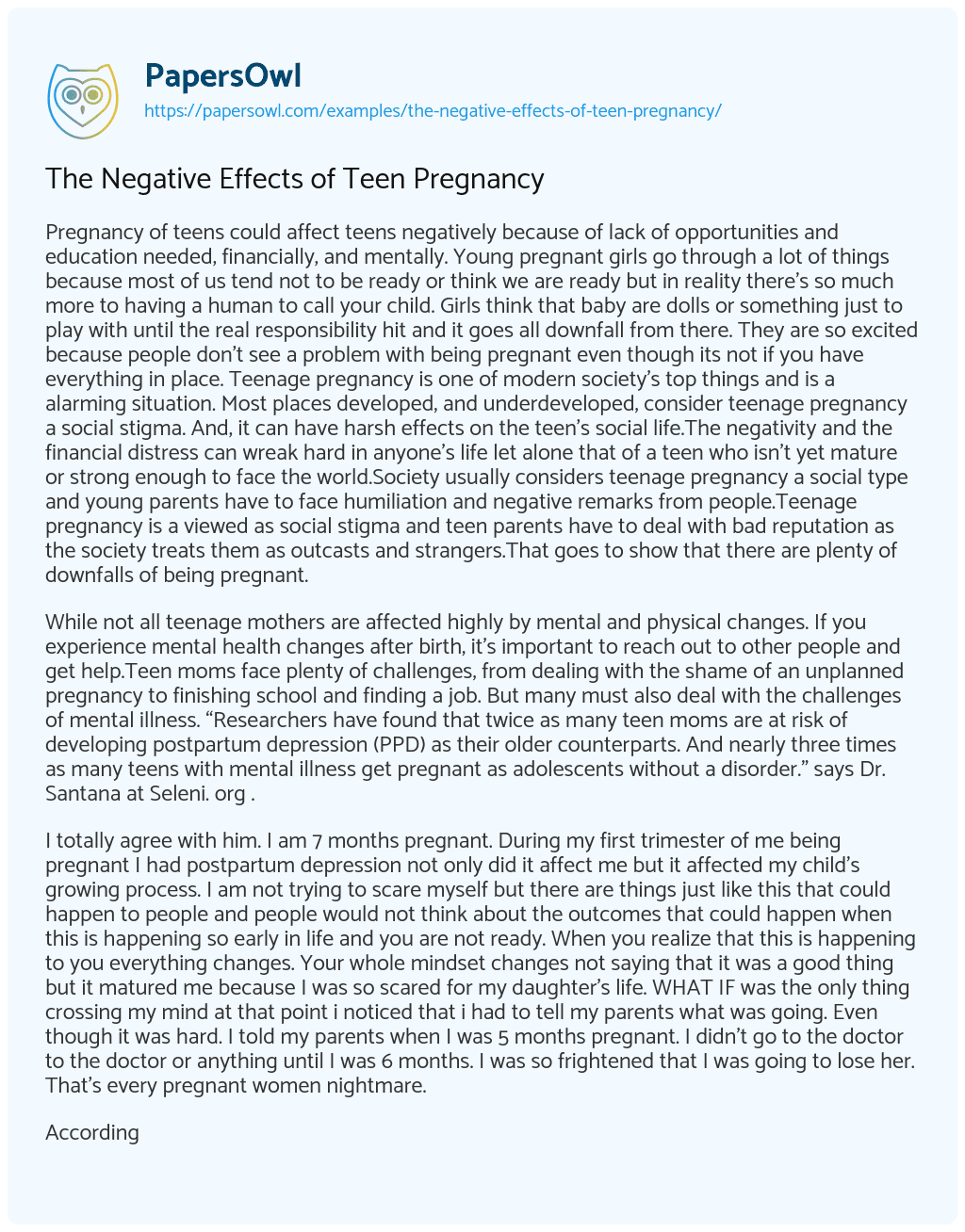 Pregnancy of teens could affect teens negatively because of lack of opportunities and education needed, financially, and mentally. Young pregnant girls go through a lot of things because most of us tend not to be ready or think we are ready but in reality there’s so much more to having a human to call your child. Girls think that baby are dolls or something just to play with until the real responsibility hit and it goes all downfall from there. They are so excited because people don’t see a problem with being pregnant even though its not if you have everything in place. Teenage pregnancy is one of modern society’s top things and is a alarming situation. Most places developed, and underdeveloped, consider teenage pregnancy a social stigma. And, it can have harsh effects on the teen’s social life.The negativity and the financial distress can wreak hard in anyone’s life let alone that of a teen who isn’t yet mature or strong enough to face the world.Society usually considers teenage pregnancy a social type and young parents have to face humiliation and negative remarks from people.Teenage pregnancy is a viewed as social stigma and teen parents have to deal with bad reputation as the society treats them as outcasts and strangers.That goes to show that there are plenty of downfalls of being pregnant.

While not all teenage mothers are affected highly by mental and physical changes. If you experience mental health changes after birth, it’s important to reach out to other people and get help.Teen moms face plenty of challenges, from dealing with the shame of an unplanned pregnancy to finishing school and finding a job. But many must also deal with the challenges of mental illness. “Researchers have found that twice as many teen moms are at risk of developing postpartum depression (PPD) as their older counterparts. And nearly three times as many teens with mental illness get pregnant as adolescents without a disorder.” says Dr. Santana at Seleni. org .

I totally agree with him. I am 7 months pregnant. During my first trimester of me being pregnant I had postpartum depression not only did it affect me but it affected my child’s growing process. I am not trying to scare myself but there are things just like this that could happen to people and people would not think about the outcomes that could happen when this is happening so early in life and you are not ready. When you realize that this is happening to you everything changes. Your whole mindset changes not saying that it was a good thing but it matured me because I was so scared for my daughter’s life. WHAT IF was the only thing crossing my mind at that point i noticed that i had to tell my parents what was going. Even though it was hard. I told my parents when I was 5 months pregnant. I didn’t go to the doctor to the doctor or anything until I was 6 months. I was so frightened that I was going to lose her. That’s every pregnant women nightmare.

According to Amanda Mitchell, PhD, postdoctoral researcher at the Wexner Medical Center, and lead author of the study, told Healthline.“ “Having a new baby on the way can exacerbate financial concerns within a household.” “This means that psychological interventions which address pregnancy-related anxiety, such as helping women and their partners prepare for changes in their work, childcare, and medical expenses, could be a good target to help reduce the adverse effects of financial stress on infant birth weight.” That come in all if not majority of all of teen pregnancies. Teens who were under the greatest financial hardship were more likely to have pregnancy-related anxiety and to be depressed which in turn appeared to result in giving birth to babies who weigh less. In other words, how women reacted to financial stress appeared to be the most important factor in a baby’s birth weight.

“Financial stress is a common concern for many pregnant women. It’s important for all women who experience pregnancy-related stress to seek out help coping with that stress,” says lead study author Amanda Mitchell. Women who were under the greatest financial problems were more than likely to have pregnancy related anxiety and to be depressed which has appeared to result in giving birth to babies who weighed less. In other words, how women reacted to financial stress appeared to be the most important thing in a baby’s birth weight. These women were also most likely to go through regular anxiety as well as higher levels of stress. Stress can alter a woman’s diet, exercise, and sleep habits, which directly affects her and her body function the baby would be impacted more that you even a cold would impact the baby inside you and could be hurting and you wouldn’t even know that can impact the baby.

According to The World Bank News “ evidence indicates that reducing inequality and generating greater opportunities for women can contribute to a reduction in the risk of teenage pregnancy and mitigate the effects of early motherhood. Social policies and programs that reduce poverty and gender inequality are crucial to this end.Risk factors can also be addressed with policy interventions that focus on community education, health, and job programs.” The report points to evidence suggesting that an increase in school hours reduces teen pregnancy rates.The report also says that the point of these rules should be to expand the set of options available to women, as well as their ability to have an effective control over their lives strengthening their agency so that they can make economic decisions on the basis of the life plans close to them.

Low opportunities causes that teenage pregnancy rates are directly linked to poverty conditions and factors associated with inequality. People thtink that those teens with more education, living in clustered areas and belonging to high income families have a lower probability of getting pregnant. Pregnant teens are more vulnerable and poorer than childless teens, this in part is explained by the fact that they belong to different at-risk groups.

It is understood as the freedom and ability a teen or woman has to effectively choose her goals and make free decisions regarding her life plans. “A teenage woman is more likely to get pregnant due to lack of agency (by following existing norms due to peer pressure, or by lacking ;the negotiating power necessary to make her partner accept the use of contraceptives).” according to ,The World Bank.com. Teenage motherhood doesn’t have to mean a young woman won’t be successful in life. But it’s important they consider what other young mothers before them have faced related to overall health, financial stability, and the health of their child.

Young mothers should talk to a school counselor or social worker regarding services that can assist them in finishing school and living a healthier life.Teenagers who give birth are at greater risk for mental health concerns than older moms. But being aware of the risks and knowing where to find help can relieve some stress and pressure.

“Being a new mom isn’t easy, no matter your age. When you’re a teen mom, taking care of yourself while you also care.”According to a study published in Maternal Child Health Journal, “teenage mothers had the poorest physical health of all categories of women studied, including women who engaged in unprotected sex.” Teenage mothers may neglect their physical health while caring for their babies. They may also not have access to or know about healthy foods and eating. They are also more likely to be huge. for your little one is especially important.

In conclusion, these are the reasons that teen pregnancy is bad and again this is not to scare anyone but it is to put everything in your head before it happens.

The Negative Effects of Teen Pregnancy. (2021, Apr 14). Retrieved from https://papersowl.com/examples/the-negative-effects-of-teen-pregnancy/