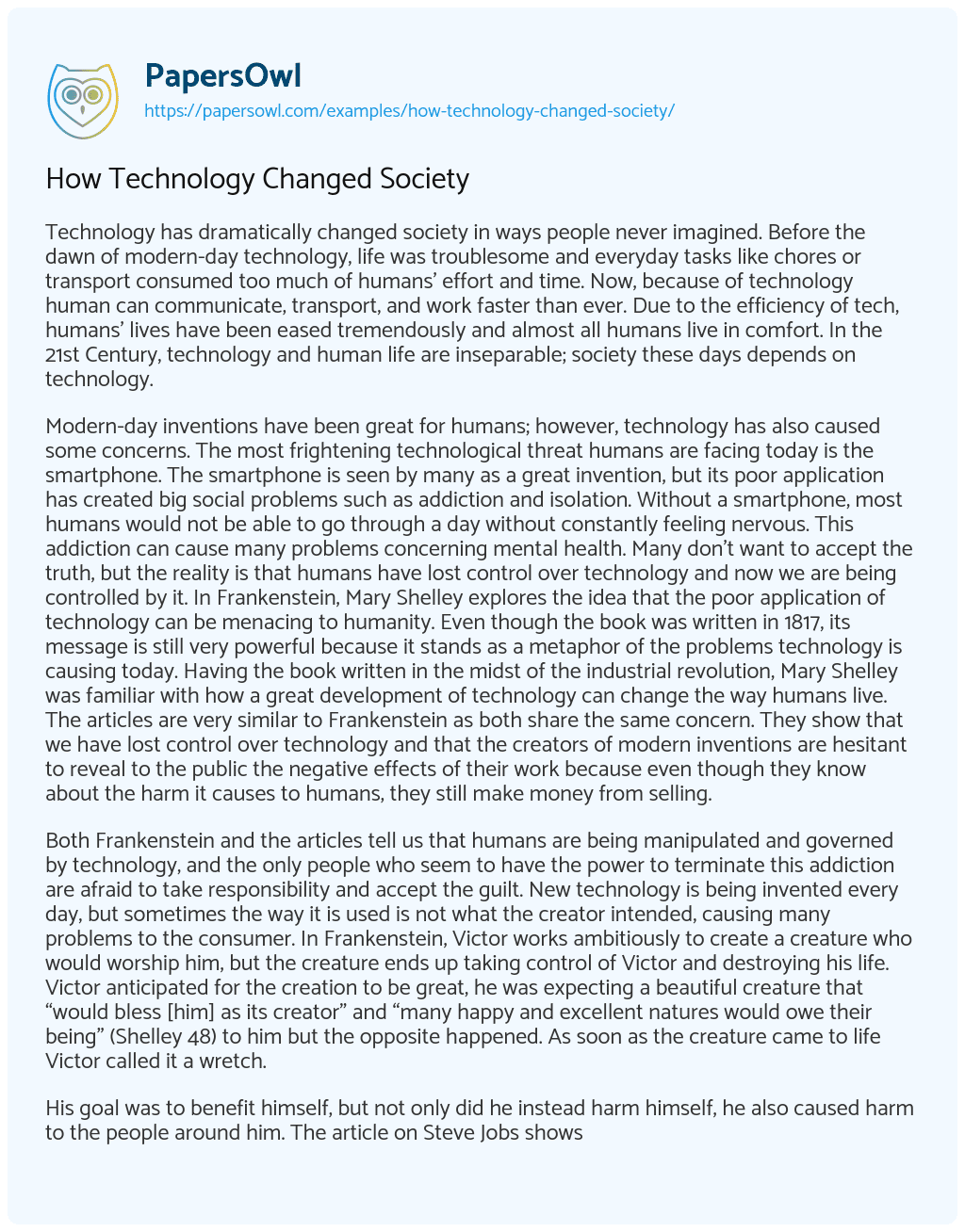 Technology has dramatically changed society in ways people never imagined. Before the dawn of modern-day technology, life was troublesome and everyday tasks like chores or transport consumed too much of humans’ effort and time. Now, because of technology human can communicate, transport, and work faster than ever. Due to the efficiency of tech, humans’ lives have been eased tremendously and almost all humans live in comfort. In the 21st Century, technology and human life are inseparable; society these days depends on technology.

Modern-day inventions have been great for humans; however, technology has also caused some concerns. The most frightening technological threat humans are facing today is the smartphone. The smartphone is seen by many as a great invention, but its poor application has created big social problems such as addiction and isolation. Without a smartphone, most humans would not be able to go through a day without constantly feeling nervous. This addiction can cause many problems concerning mental health. Many don’t want to accept the truth, but the reality is that humans have lost control over technology and now we are being controlled by it. In Frankenstein, Mary Shelley explores the idea that the poor application of technology can be menacing to humanity. Even though the book was written in 1817, its message is still very powerful because it stands as a metaphor of the problems technology is causing today. Having the book written in the midst of the industrial revolution, Mary Shelley was familiar with how a great development of technology can change the way humans live. The articles are very similar to Frankenstein as both share the same concern. They show that we have lost control over technology and that the creators of modern inventions are hesitant to reveal to the public the negative effects of their work because even though they know about the harm it causes to humans, they still make money from selling.

Both Frankenstein and the articles tell us that humans are being manipulated and governed by technology, and the only people who seem to have the power to terminate this addiction are afraid to take responsibility and accept the guilt. New technology is being invented every day, but sometimes the way it is used is not what the creator intended, causing many problems to the consumer. In Frankenstein, Victor works ambitiously to create a creature who would worship him, but the creature ends up taking control of Victor and destroying his life. Victor anticipated for the creation to be great, he was expecting a beautiful creature that “would bless [him] as its creator” and “many happy and excellent natures would owe their being” (Shelley 48) to him but the opposite happened. As soon as the creature came to life Victor called it a wretch.

His goal was to benefit himself, but not only did he instead harm himself, he also caused harm to the people around him. The article on Steve Jobs shows the same problem happening. Based on the article Steve Jobs never intended that we use our smartphones the way we do , in fact, “you’ll be surprised by how he imagined our relationship with this iconic invention, because this vision [was] so different from the way most of us use these devices now” (Bilton Nick – Steve Jobs Was a Low-Tech Parent ). For Steve Jobs, the iPhone would be a device people would use to make calls and listen to music, he did not trust third party app, and in the first iPhone he created there was no App store. Today however, our phones are in our hands as soon as we wake up “and command our attention until the final moments before we fall asleep” (Bilton Nick – Steve Jobs Was a Low-Tech Parent). The iPhone is a great invention and it has reinvented our lives, doing so in some ways that have very negative effects on us. The article “OUR MINDS HAVE BEEN HIJACKED BY OUR PHONES” shows how the smartphone, which was designed to help us, is harming us in a great way. Today we are being manipulated by apps, websites, advertisers, and notifications that are found in our phones.

Our phones are not designed to help us, they are designed to keep us “hooked to the screen for as long and as frequently as possible” (Thompson Nicholas – Social Media Has Hijacked Our Minds). The creators of smartphones don’t necessarily want to harm their consumers; however, because they are driven by ambition and hunger for money and success, they do not think clearly of the consequences that their creation might cause, just like Victor wasn’t thinking of the impact the creature could cause to the world. Smartphones, especially through social media are the largest sources of influence in the world. They steer what billions of people think and believe every day, often spreading fake and biased information influenced politically. When Victor was working on his creation he completely isolated from the world. Like Victor, the more people use their phones, the more they isolate and start appreciating the nature around them less. When Victor stops working on his creation, he feels depressed and little by little starts liking the nature around him more and more every day. Similar to Victor when we don’t have our phones with us, we tend to feel nervous and stressed, as if we are missing something important. Once we get used to the fact that we don’t have our phone we start enjoying other things, things as simple as taking a walk-in nature. The smartphone is a great invention; however, it has completely alternated the way people think and look at life and, in a way,, people have lost some freedom of thought and belief because of the influence by social media.

The creators know something we don’t, but they don’t want to share it because they don’t want to feel guilty and responsible. They want to keep selling and making more money, putting their self-interest before the interest of all the people in the world. The creators, just like Victor are too scared to face the consequences. Technology has done many great things for humans; however today it is causing many social issues. People need to deal with the issues caused by technology, or one day technology can destroy people’s lives. In order to deal with the issues, people need to be informed what these issues are, and that’s the creators job. Creators need to cooperate with their consumers to develop products that benefit both sides. That’s he only way that technology can be healthy in the future.

The Negative Aspects that Technology has Brought Us