The Eerie Truth of the Underground Railroad 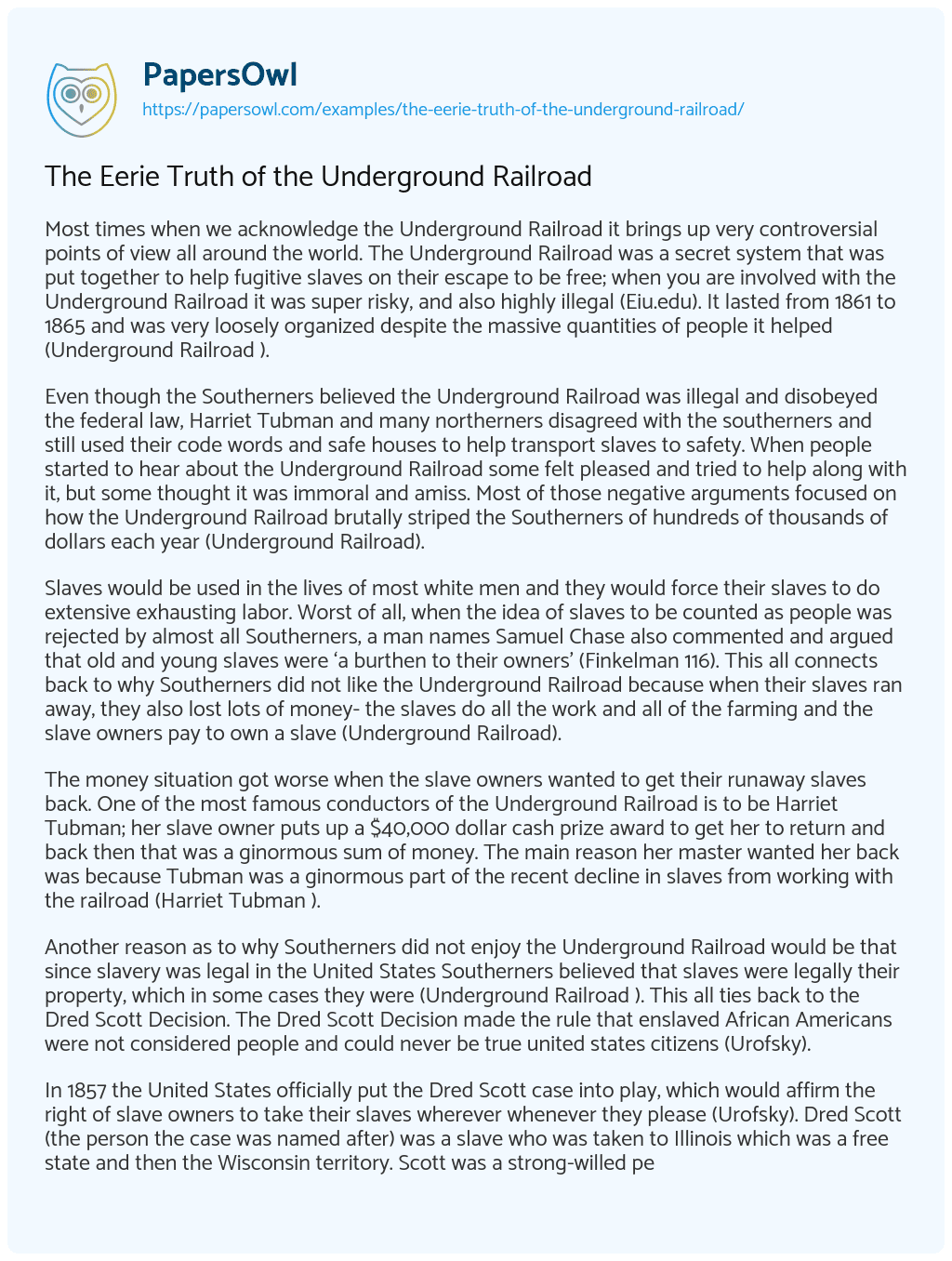 Slaves would be used in the lives of most white men and they would force their slaves to do extensive exhausting labor. Worst of all, when the idea of slaves to be counted as people was rejected by almost all Southerners, a man names Samuel Chase also commented and argued that old and young slaves were ‘a burthen to their owners’ (Finkelman 116). This all connects back to why Southerners did not like the Underground Railroad because when their slaves ran away, they also lost lots of money- the slaves do all the work and all of the farming and the slave owners pay to own a slave (Underground Railroad).

The money situation got worse when the slave owners wanted to get their runaway slaves back. One of the most famous conductors of the Underground Railroad is to be Harriet Tubman; her slave owner puts up a $40,000 dollar cash prize award to get her to return and back then that was a ginormous sum of money. The main reason her master wanted her back was because Tubman was a ginormous part of the recent decline in slaves from working with the railroad (Harriet Tubman ).

Another reason as to why Southerners did not enjoy the Underground Railroad would be that since slavery was legal in the United States Southerners believed that slaves were legally their property, which in some cases they were (Underground Railroad ). This all ties back to the Dred Scott Decision. The Dred Scott Decision made the rule that enslaved African Americans were not considered people and could never be true united states citizens (Urofsky).

In 1857 the United States officially put the Dred Scott case into play, which would affirm the right of slave owners to take their slaves wherever whenever they please (Urofsky). Dred Scott (the person the case was named after) was a slave who was taken to Illinois which was a free state and then the Wisconsin territory. Scott was a strong-willed person so he tried to buy his family that was still enslaved out of slavery. The master refused, but Scott wasn’t going down without a fight so he sued the master, but he lost because he wasn’t a legal citizen of the United States (Urofsky).

Furthermore this demonstrated how slaves were still declared as property and how the Southerners got upset if they were treated as people. Even though the Southerners did not enjoy the Underground Railroad it still happened and there were many secret things that were done in order to keep the Underground Railroad hidden. They used code names to get around and transport their slaves safely. Some of the main code names that were used for the Underground Railroad was a Station or Depot, which was a safe house where fugitive slaves could find food and shelter (this one was the most crucial because without it they couldn’t survive), the Conductors were people like Harriet Tubman who were willing to slip deep into slave territory in order to lead runaways to freedom, and Parcels or Passengers were the runaway slaves themselves (Altman).

Another main part of the Underground Railroad would be the risky escape above land because you can’t stay underground forever. When slaves were travelling above ground they called safe back roads and safe trails- Tracks (Altman). It was so important for people to understand the important code words because without them their lives were at stake. One of the other things they used to communicate in secret was songs. The first song they used to communicate was called “Swing Low, Sweet Chariot, coming for to carry me home” and this meant that a conductor of the Underground Railroad was in the area and that an escape was due soon (Altman). This was a crucial code because without it they wouldn’t know the proper time to leave, and they could get caught in the act.

The spiritual “Wade in the Water” was a code that instructed slaves to walk in rivers and streams so that the dogs tracking them will not be able to pick up any scent. This was also very important, so they could get different places without leaving any footprints or trace (Altman). Some other code words that were used, but were not as important as the others would be, Tickets; this indicated that slaves were traveling on the Railroad, Stockholders; financial supporters who donated to the Railroad, Heaven or Promised Land; Canada and the northern free states, and the Drinking Gourd; the Big Dipper constellation—a constellation pointed to the North Star.

The Big Dipper was known as the Drinking Gourd to the traveling slaves and the gourds handle led Tubman right to the North star or in other words Harriet Tubman’s freedom (Paulson)! One of the biggest details to Harriet Tubman’s quest is that she went on her journey completely solo. Tubman soon became known as the “Hero of their time” and her name was now General Tubman (Paulson). Our next significant figure would be known by the name of Frederick Douglass. Douglass escaped from slavery in Maryland and later went on to become a huge abolitionist movement leader which also sometimes contributed to the Underground Railroad; After that he continued to push for equality and human rights until his death in 1895 (History.com). Out final important figure in the Underground Railroad would be John Fairfield. Fairfield started on the Underground Railroad when he helped a slave friend escape to Canada and after that he had people pay him to help them escape and he is now known to have helped over 1,000 slaves escape slavery through the Underground Railroad; many other names for him would be a famous slaveholder, a slave trader and maybe even a peddler (History.com).

From examining the Underground Railroad very thoroughly it can confidently be said that it was one of the most amazing things to ever happen to African American history and it will stay that way for years to come. While conductors along with Harriet Tubman aided in the escape of tens of thousands of slaves, southerners at the time were not in favor of anything that involved the Underground Railroad. They gave the people who worked with it lots of complications as conductors used all the different tactics to help free the enslaved. The next time the Underground Railroad is mentioned, think about all of the trouble the enslaved people went through just to be free and maybe teach someone else this marvelous story and pass it on for generations to come.

The Eerie Truth of the Underground Railroad. (2021, Apr 02). Retrieved from https://papersowl.com/examples/the-eerie-truth-of-the-underground-railroad/