The Crucible: Tell the Truth 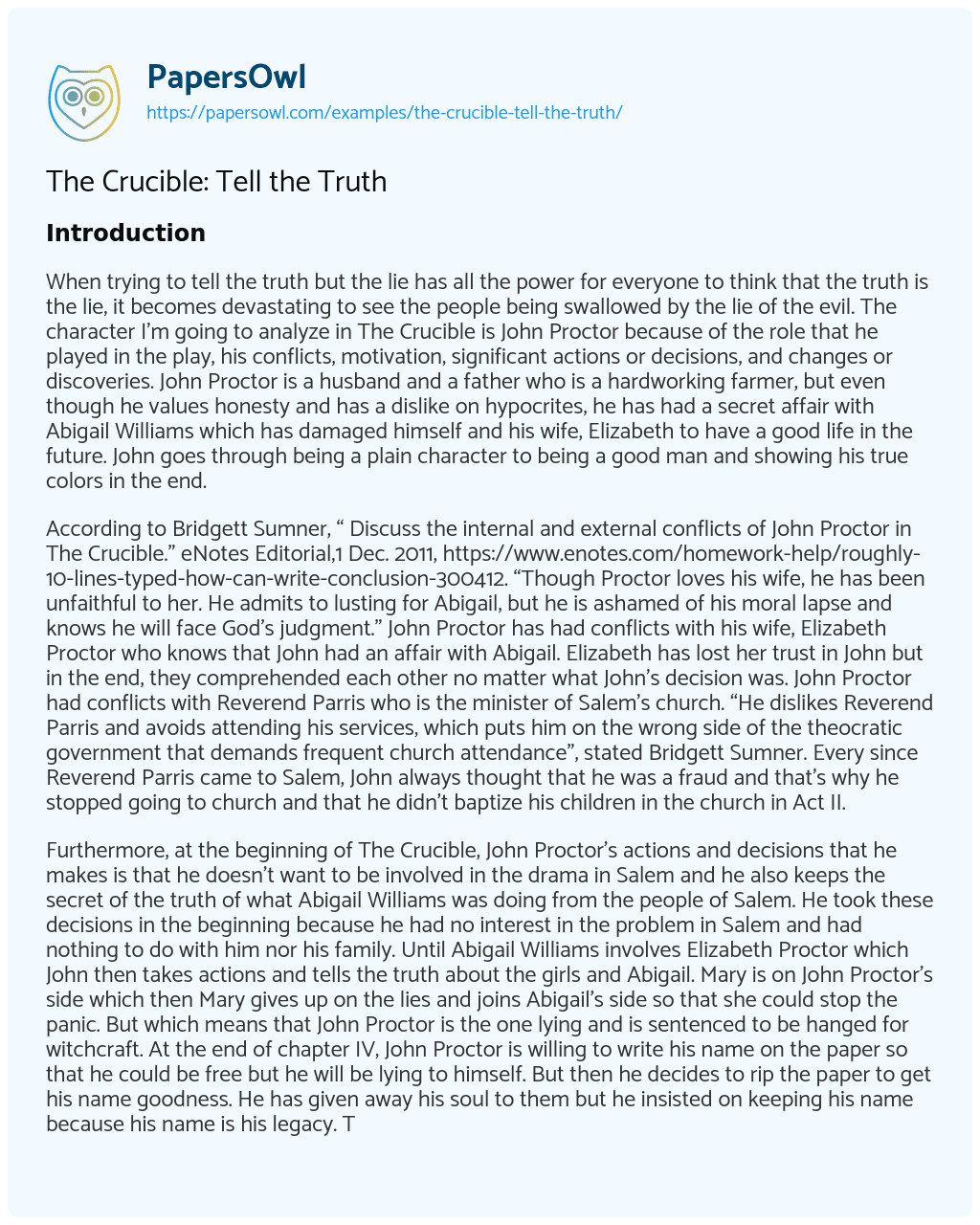 When trying to tell the truth but the lie has all the power for everyone to think that the truth is the lie, it becomes devastating to see the people being swallowed by the lie of the evil. The character I’m going to analyze in The Crucible is John Proctor because of the role that he played in the play, his conflicts, motivation, significant actions or decisions, and changes or discoveries. John Proctor is a husband and a father who is a hardworking farmer, but even though he values honesty and has a dislike on hypocrites, he has had a secret affair with Abigail Williams which has damaged himself and his wife, Elizabeth to have a good life in the future. John goes through being a plain character to being a good man and showing his true colors in the end.

According to Bridgett Sumner, “ Discuss the internal and external conflicts of John Proctor in The Crucible.” eNotes Editorial,1 Dec. 2011, https://www.enotes.com/homework-help/roughly-10-lines-typed-how-can-write-conclusion-300412. “Though Proctor loves his wife, he has been unfaithful to her. He admits to lusting for Abigail, but he is ashamed of his moral lapse and knows he will face God’s judgment.” John Proctor has had conflicts with his wife, Elizabeth Proctor who knows that John had an affair with Abigail. Elizabeth has lost her trust in John but in the end, they comprehended each other no matter what John’s decision was. John Proctor had conflicts with Reverend Parris who is the minister of Salem’s church. “He dislikes Reverend Parris and avoids attending his services, which puts him on the wrong side of the theocratic government that demands frequent church attendance”, stated Bridgett Sumner. Every since Reverend Parris came to Salem, John always thought that he was a fraud and that’s why he stopped going to church and that he didn’t baptize his children in the church in Act II.

Furthermore, at the beginning of The Crucible, John Proctor’s actions and decisions that he makes is that he doesn’t want to be involved in the drama in Salem and he also keeps the secret of the truth of what Abigail Williams was doing from the people of Salem. He took these decisions in the beginning because he had no interest in the problem in Salem and had nothing to do with him nor his family. Until Abigail Williams involves Elizabeth Proctor which John then takes actions and tells the truth about the girls and Abigail. Mary is on John Proctor’s side which then Mary gives up on the lies and joins Abigail’s side so that she could stop the panic. But which means that John Proctor is the one lying and is sentenced to be hanged for witchcraft. At the end of chapter IV, John Proctor is willing to write his name on the paper so that he could be free but he will be lying to himself. But then he decides to rip the paper to get his name goodness. He has given away his soul to them but he insisted on keeping his name because his name is his legacy. These actions and decisions that he took throughout act 1 to act 4 are because he doesn’t want to be a man of a lie but a man of good who repents from his sins and keeping his truth till the end.

Finally, ‘Evolution Of John Proctor In The Crucible English Literature Essay.’ UKEssays.com. 11 2018. All Answers Ltd. 03 2020 . “Proctor is involved in the Salem Witch trial in which his wife is accused of being a witch. This leads to an important change of his personality: John Proctor changes from a normal citizen and a sinner to a tragic hero, a person of a high sense of morality. This evolution of his character is due to many situations he is faced with and which aroused strong feelings and beliefs.” At the beginning of Act 1 & 2, it makes John proctor a bad person who has had an affair with Abigail which also means that he is cheating on his wife Elizabeth who has had trust in him. Even though he has had an affair with Abigail, he regrets being with her which in Act 3 & 4, John has demonstrated his regret with Abigail by going against her because she is a fraud and the girls. They’d have destroyed and killed people’s lives all to get John to be with Abigail. “He refuses Abigail’s tricks and ends definitively his relation with her. He starts to show great attention to Elizabeth and regrets a lot of his sin. He also proposes to buy her a heifer. Proctor is very angry with Abigail when she insults his wife: “Oh, I marvel how such a strong man may let such a sickly wife be”. In the beginning, John proctor shows like a character who doesn’t care about others but himself and gets angry easily but now he doesn’t abandon the women for being hanged because he has kept his faith like them and they only know that the only judge is the one high in the heavens.

We can see how John proctor has changed drastically in the crucible all the way to his doom. After analyzing John Proctor, I’ve seen how he looked at things from a different perspective to find the cause and the truth behind Abigail’s intentions. Also, I’ve seen that he puts the people who he cares before himself that made him a great man for the citizens in Salem. I find John Proctor believable because he did do the right thing into fighting for the innocent people and I really admire John Proctor even he had an affair with Abigail, he repented for being with Abigail and made the right thing in the end. When trying to tell the truth but the lie has all the power for everyone to think that the truth is the lie, it becomes devastating to see the people being swallowed by the lie of the evil.

The Crucible: Tell the Truth. (2021, Mar 27). Retrieved from https://papersowl.com/examples/the-crucible-tell-the-truth/

7 Deadly Sins in the Crucible