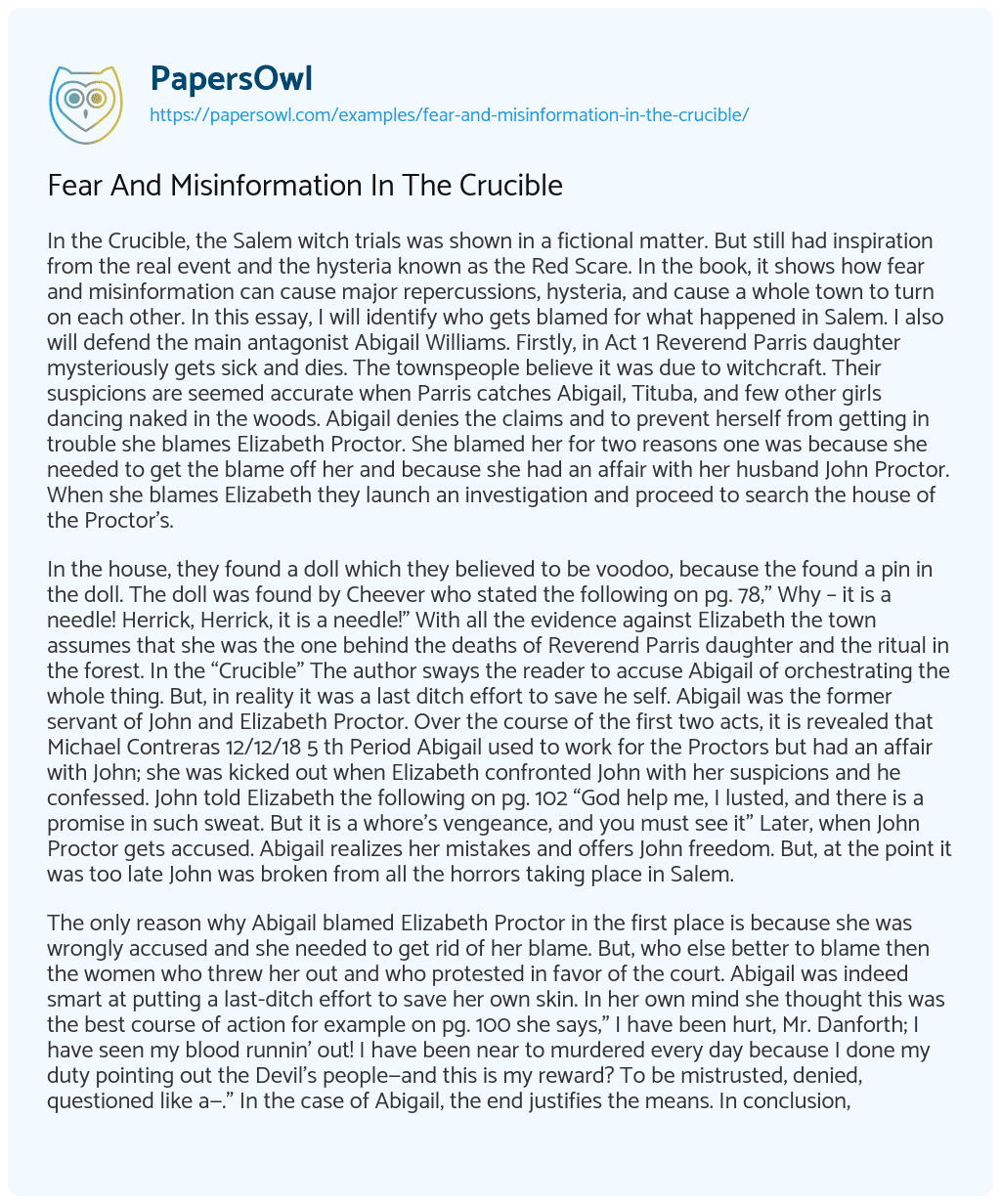 In the Crucible, the Salem witch trials was shown in a fictional matter. But still had inspiration from the real event and the hysteria known as the Red Scare. In the book, it shows how fear and misinformation can cause major repercussions, hysteria, and cause a whole town to turn on each other. In this essay, I will identify who gets blamed for what happened in Salem. I also will defend the main antagonist Abigail Williams. Firstly, in Act 1 Reverend Parris daughter mysteriously gets sick and dies. The townspeople believe it was due to witchcraft. Their suspicions are seemed accurate when Parris catches Abigail, Tituba, and few other girls dancing naked in the woods. Abigail denies the claims and to prevent herself from getting in trouble she blames Elizabeth Proctor. She blamed her for two reasons one was because she needed to get the blame off her and because she had an affair with her husband John Proctor. When she blames Elizabeth they launch an investigation and proceed to search the house of the Proctor’s.

In the house, they found a doll which they believed to be voodoo, because the found a pin in the doll. The doll was found by Cheever who stated the following on pg. 78,” Why – it is a needle! Herrick, Herrick, it is a needle!” With all the evidence against Elizabeth the town assumes that she was the one behind the deaths of Reverend Parris daughter and the ritual in the forest. In the “Crucible” The author sways the reader to accuse Abigail of orchestrating the whole thing. But, in reality it was a last ditch effort to save he self. Abigail was the former servant of John and Elizabeth Proctor. Over the course of the first two acts, it is revealed that Michael Contreras 12/12/18 5 th Period Abigail used to work for the Proctors but had an affair with John; she was kicked out when Elizabeth confronted John with her suspicions and he confessed. John told Elizabeth the following on pg. 102 “God help me, I lusted, and there is a promise in such sweat. But it is a whore’s vengeance, and you must see it” Later, when John Proctor gets accused. Abigail realizes her mistakes and offers John freedom. But, at the point it was too late John was broken from all the horrors taking place in Salem.

The only reason why Abigail blamed Elizabeth Proctor in the first place is because she was wrongly accused and she needed to get rid of her blame. But, who else better to blame then the women who threw her out and who protested in favor of the court. Abigail was indeed smart at putting a last-ditch effort to save her own skin. In her own mind she thought this was the best course of action for example on pg. 100 she says,” I have been hurt, Mr. Danforth; I have seen my blood runnin’ out! I have been near to murdered every day because I done my duty pointing out the Devil’s people—and this is my reward? To be mistrusted, denied, questioned like a—.” In the case of Abigail, the end justifies the means. In conclusion, Abigail was a cunning and masterful liar who caused Salem grief and disruption. But, she only did this to save her own skin. She probably didn’t think her little white lies would lead to the mass hysteria and mass executions of the inhabitants of Salem. In the end, she realized her mistakes and tried to address them but at the point the town was too far gone to stop the motion of what was put in place.

Fear And Misinformation In The Crucible. (2020, Mar 31). Retrieved from https://papersowl.com/examples/fear-and-misinformation-in-the-crucible/