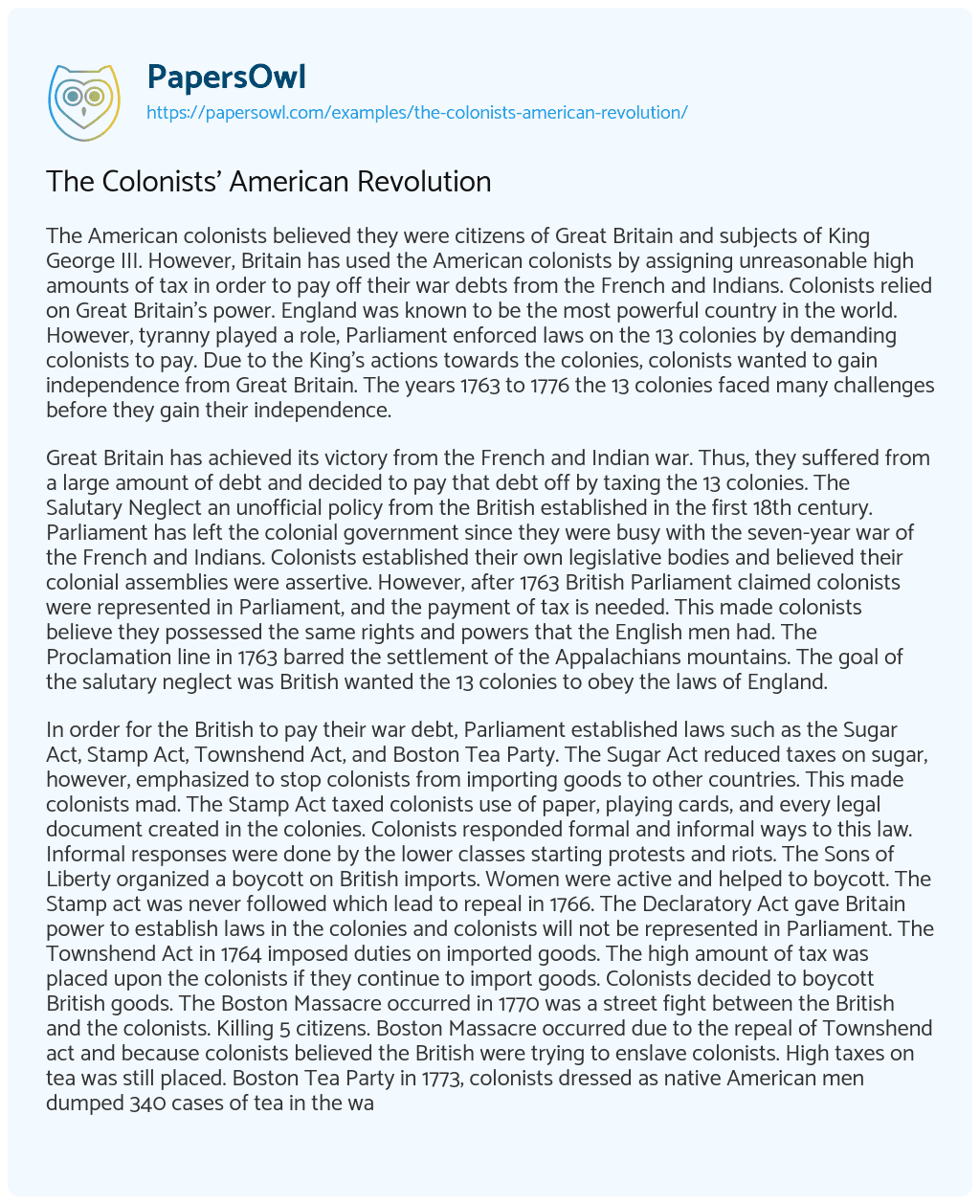 The American colonists believed they were citizens of Great Britain and subjects of King George III. However, Britain has used the American colonists by assigning unreasonable high amounts of tax in order to pay off their war debts from the French and Indians. Colonists relied on Great Britain’s power. England was known to be the most powerful country in the world. However, tyranny played a role, Parliament enforced laws on the 13 colonies by demanding colonists to pay. Due to the King’s actions towards the colonies, colonists wanted to gain independence from Great Britain. The years 1763 to 1776 the 13 colonies faced many challenges before they gain their independence.

Great Britain has achieved its victory from the French and Indian war. Thus, they suffered from a large amount of debt and decided to pay that debt off by taxing the 13 colonies. The Salutary Neglect an unofficial policy from the British established in the first 18th century. Parliament has left the colonial government since they were busy with the seven-year war of the French and Indians. Colonists established their own legislative bodies and believed their colonial assemblies were assertive. However, after 1763 British Parliament claimed colonists were represented in Parliament, and the payment of tax is needed. This made colonists believe they possessed the same rights and powers that the English men had. The Proclamation line in 1763 barred the settlement of the Appalachians mountains. The goal of the salutary neglect was British wanted the 13 colonies to obey the laws of England.

In order for the British to pay their war debt, Parliament established laws such as the Sugar Act, Stamp Act, Townshend Act, and Boston Tea Party. The Sugar Act reduced taxes on sugar, however, emphasized to stop colonists from importing goods to other countries. This made colonists mad. The Stamp Act taxed colonists use of paper, playing cards, and every legal document created in the colonies. Colonists responded formal and informal ways to this law. Informal responses were done by the lower classes starting protests and riots. The Sons of Liberty organized a boycott on British imports. Women were active and helped to boycott. The Stamp act was never followed which lead to repeal in 1766. The Declaratory Act gave Britain power to establish laws in the colonies and colonists will not be represented in Parliament. The Townshend Act in 1764 imposed duties on imported goods. The high amount of tax was placed upon the colonists if they continue to import goods. Colonists decided to boycott British goods. The Boston Massacre occurred in 1770 was a street fight between the British and the colonists. Killing 5 citizens. Boston Massacre occurred due to the repeal of Townshend act and because colonists believed the British were trying to enslave colonists. High taxes on tea was still placed. Boston Tea Party in 1773, colonists dressed as native American men dumped 340 cases of tea in the water. British were shocked by the destruction and closed down Boston till colonist paid for the loss.

Ideology was a contributing factor that leads to the American Revolution. Colonists believed Parliament enforced and established such laws to take away their freedom and liberty. New taxes were established and colonists were demanded to pay. Colonists noticed that British are failing on their duties. Slave owners in the south were worried about the insecurities of their slaves. Colonists saw signs from the British when increasing numbers of placement were established, standing army, and plural office holding. These all contribute and lead to the American revolution because colonists started to acknowledge they were not treated the same as the Englishmen. Revolutionary ideology was illustrated when colonists started describing how Britain was trying to make them slaves.

The social economic factors during the American Revolution was illustrated when men and some women from the lower classes demanded political participation and economic opportunity. Lower class people participated in many wars such as The Regulator Wars in South and North Carolina, The Hudson Valley Rent War, and The Green Mountain Land War. The lower class also involved themselves in the Committee of Safety. They were also involved in the Continental Army which made them prepared for political participation. The relations between colonists and Indians were just as bad. The colonists believed they had the right to take away lands from the Indians and if the Indians attacked, colonists should be protected by the British Imperial Government. When the Proclamation Line was passed colonists were upset because they wanted the western land. The relations between slave owners and slaves were affected during these times because of Somerset Decision. Somerset decision emphasized that there would be no slaves in England law. Somerset goal was to abolish slavery, colonists and slave owners didn’t like this decision from the British. Slave owners feared that the slave would work for England and conspire against them.

The First Continental Congress called in 1774. Colonists gathered and agreed that they were not represented in Parliament and they never will be. They discussed the issues of tax and illustrated that there should be no taxes established without their consent. They also came to an agreement if these demands are not met, then there would be another meeting around Spring 1775. Before the Second Continental Congress met the Battle of Lexington and Concord took place. This battle was fought in April 1775, 49 Americans and 73 British died from this battle. Paul Revere helped the colonists by informing them where the British were. After all this the 13 colonies were ready to gain independence, Thomas Paine pamphlet called “Common Sense” described how Great Britain was being a burden the 13 colonies and not a benefit. This influenced colonists to fight for independence. The Second Continental Congress have met and decided to declare independence. Colonists authorized continental army.