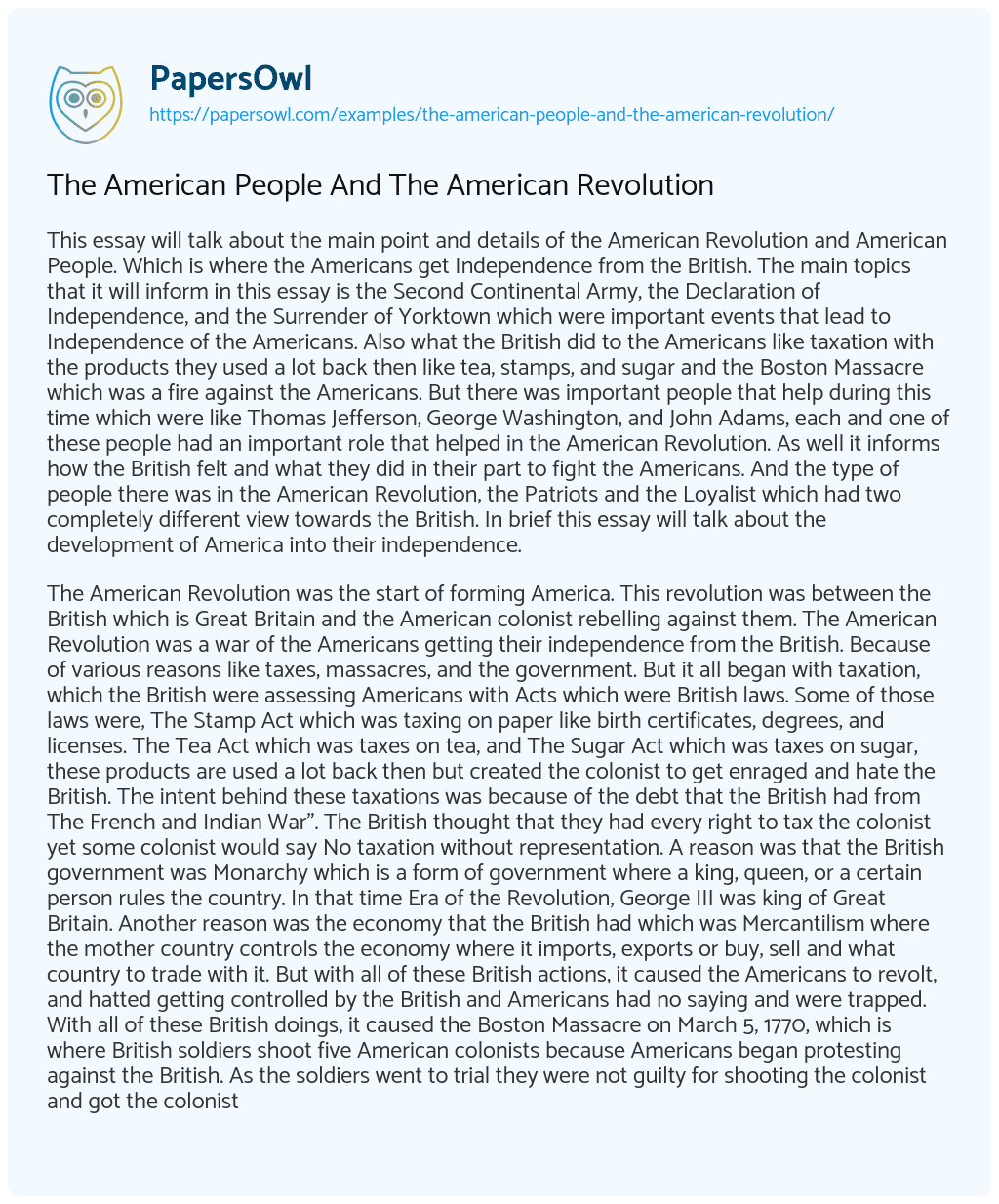 The American Revolution was the start of forming America. This revolution was between the British which is Great Britain and the American colonist rebelling against them. The American Revolution was a war of the Americans getting their independence from the British. Because of various reasons like taxes, massacres, and the government. But it all began with taxation, which the British were assessing Americans with Acts which were British laws. Some of those laws were, The Stamp Act which was taxing on paper like birth certificates, degrees, and licenses. The Tea Act which was taxes on tea, and The Sugar Act which was taxes on sugar, these products are used a lot back then but created the colonist to get enraged and hate the British. The intent behind these taxations was because of the debt that the British had from The French and Indian War”. The British thought that they had every right to tax the colonist yet some colonist would say No taxation without representation. A reason was that the British government was Monarchy which is a form of government where a king, queen, or a certain person rules the country. In that time Era of the Revolution, George III was king of Great Britain. Another reason was the economy that the British had which was Mercantilism where the mother country controls the economy where it imports, exports or buy, sell and what country to trade with it. But with all of these British actions, it caused the Americans to revolt, and hatted getting controlled by the British and Americans had no saying and were trapped. With all of these British doings, it caused the Boston Massacre on March 5, 1770, which is where British soldiers shoot five American colonists because Americans began protesting against the British. As the soldiers went to trial they were not guilty for shooting the colonist and got the colonist enraged. Later on, there was the battle on April 19, 1775, which was The Battle of Lexington and Concord this was the first battle of the American Revolution and which the American colonist won.

My last main topic is the Surrender at Yorktown. The Battle of Yorktown which is when the British finally surrender to the American Colonist. A big victory to the Americans because they finally had independence. The Battle of Yorktown lasted from September 28, 1781, to October 19, 1781. This victory was made from General George Washington, the Continental Army and the alliance of the French. Later on, when they had independence from the British, the American pride got bigger and bigger because of the victory. To end the war with the British, they had to sign the Treaty of Paris 1783 which was an agreement ending the American Revolution. Then soon enough George Washington became the first president of the United States. The British didn’t give an easy fight to the Americans this revolution lasted 7 years with a lot of chaos. To summarize, the American Revolution was the development of America and the causes of the Americans to be independent from the British. For instance the Stamp Act, Sugar Act, Boston Massacre. However the Americans needed support to defeat or go against the British which was The Second Continental Congress, and the Continental Army. In addition they were certain important people that helped bring the victory which were Benjamin Franklin, Thomas Jefferson, George Washington. Furthermore, the Declaration of Independence was their notice to the British, and the victory that finalized was the Battle of Yorktown. America kept continue on to be independent it went through a lot to be the country it is today.

The American Revolution and the United States of America