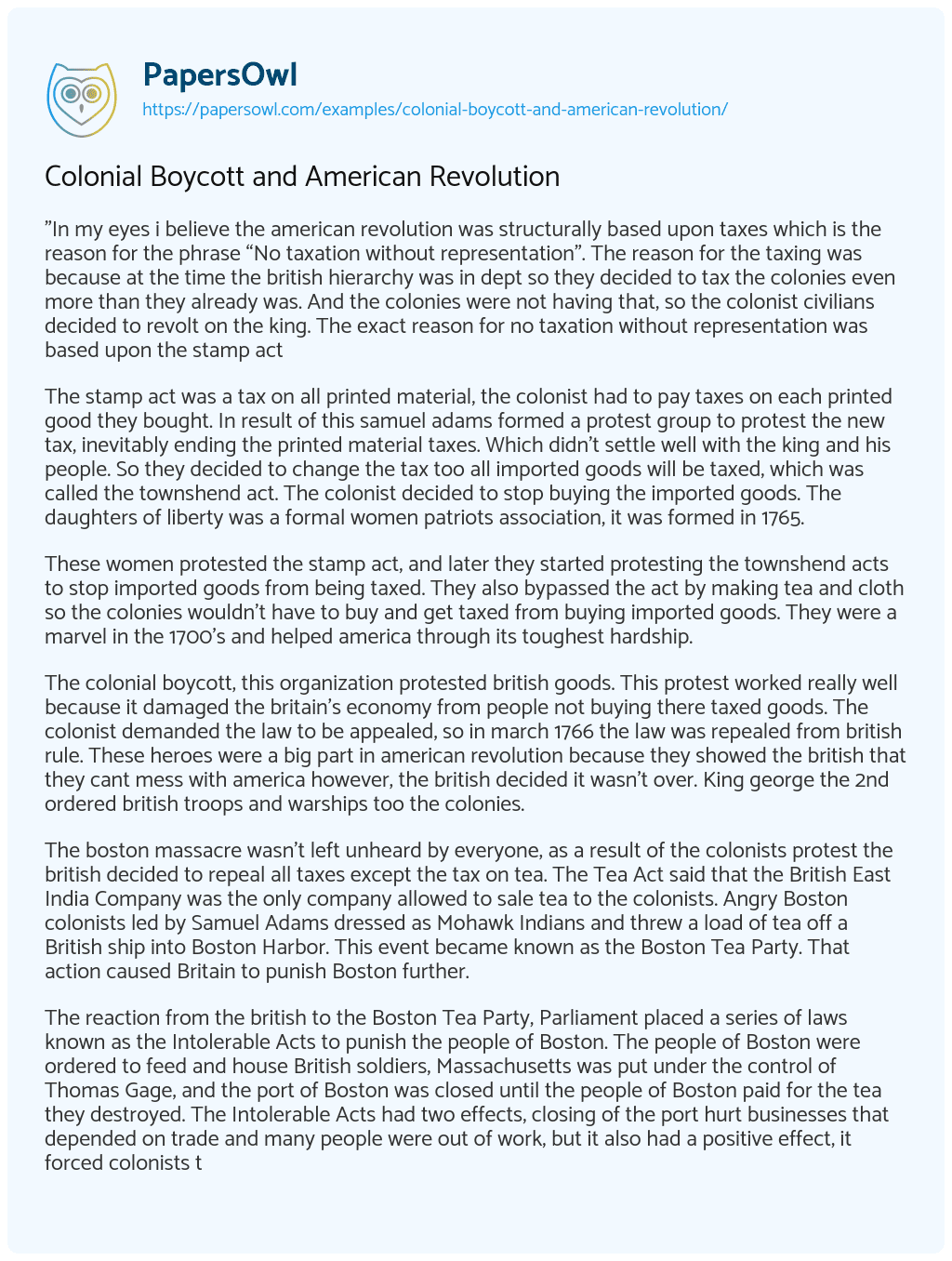 “In my eyes i believe the american revolution was structurally based upon taxes which is the reason for the phrase “No taxation without representation”. The reason for the taxing was because at the time the british hierarchy was in dept so they decided to tax the colonies even more than they already was. And the colonies were not having that, so the colonist civilians decided to revolt on the king. The exact reason for no taxation without representation was based upon the stamp act

The stamp act was a tax on all printed material, the colonist had to pay taxes on each printed good they bought. In result of this samuel adams formed a protest group to protest the new tax, inevitably ending the printed material taxes. Which didn’t settle well with the king and his people. So they decided to change the tax too all imported goods will be taxed, which was called the townshend act. The colonist decided to stop buying the imported goods. The daughters of liberty was a formal women patriots association, it was formed in 1765.

These women protested the stamp act, and later they started protesting the townshend acts to stop imported goods from being taxed. They also bypassed the act by making tea and cloth so the colonies wouldn’t have to buy and get taxed from buying imported goods. They were a marvel in the 1700’s and helped america through its toughest hardship.

The colonial boycott, this organization protested british goods. This protest worked really well because it damaged the britain’s economy from people not buying there taxed goods. The colonist demanded the law to be appealed, so in march 1766 the law was repealed from british rule. These heroes were a big part in american revolution because they showed the british that they cant mess with america however, the british decided it wasn’t over. King george the 2nd ordered british troops and warships too the colonies.

The boston massacre wasn’t left unheard by everyone, as a result of the colonists protest the british decided to repeal all taxes except the tax on tea. The Tea Act said that the British East India Company was the only company allowed to sale tea to the colonists. Angry Boston colonists led by Samuel Adams dressed as Mohawk Indians and threw a load of tea off a British ship into Boston Harbor. This event became known as the Boston Tea Party. That action caused Britain to punish Boston further.

In response to the Intolerable Acts, Americans representing 12 colonies met in Philadelphia for the First Continental Congress. They voted to stop trading with Britain until the Intolerable Acts were repealed, and to start training colonists to fight. In March 1775 Patrick Henry made the most famous speech of his career. Henry warned Virginia’s militias to prepare for war with Britain. “”I know not what course others may take; but as for me, give me liberty or give me death!”” were the last words spoken at the meeting by Patrick Henry. War was inevitable.”

Colonial Boycott and American Revolution. (2021, May 27). Retrieved from https://papersowl.com/examples/colonial-boycott-and-american-revolution/