The Backbone of the U.S Navy in World War II 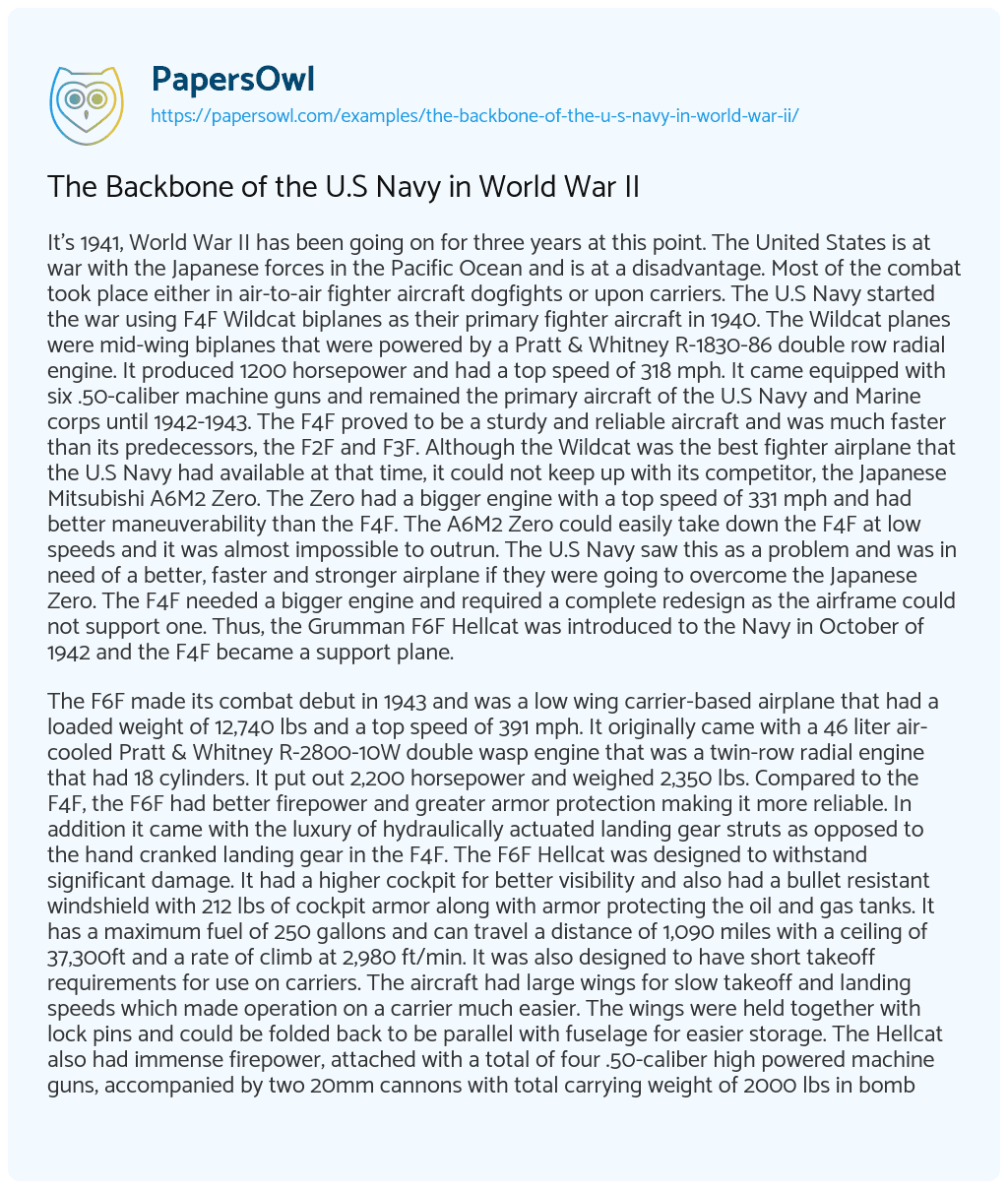 It’s 1941, World War II has been going on for three years at this point. The United States is at war with the Japanese forces in the Pacific Ocean and is at a disadvantage. Most of the combat took place either in air-to-air fighter aircraft dogfights or upon carriers. The U.S Navy started the war using F4F Wildcat biplanes as their primary fighter aircraft in 1940. The Wildcat planes were mid-wing biplanes that were powered by a Pratt & Whitney R-1830-86 double row radial engine. It produced 1200 horsepower and had a top speed of 318 mph. It came equipped with six .50-caliber machine guns and remained the primary aircraft of the U.S Navy and Marine corps until 1942-1943. The F4F proved to be a sturdy and reliable aircraft and was much faster than its predecessors, the F2F and F3F. Although the Wildcat was the best fighter airplane that the U.S Navy had available at that time, it could not keep up with its competitor, the Japanese Mitsubishi A6M2 Zero. The Zero had a bigger engine with a top speed of 331 mph and had better maneuverability than the F4F. The A6M2 Zero could easily take down the F4F at low speeds and it was almost impossible to outrun. The U.S Navy saw this as a problem and was in need of a better, faster and stronger airplane if they were going to overcome the Japanese Zero. The F4F needed a bigger engine and required a complete redesign as the airframe could not support one. Thus, the Grumman F6F Hellcat was introduced to the Navy in October of 1942 and the F4F became a support plane.

The F6F made its combat debut in 1943 and was a low wing carrier-based airplane that had a loaded weight of 12,740 lbs and a top speed of 391 mph. It originally came with a 46 liter air-cooled Pratt & Whitney R-2800-10W double wasp engine that was a twin-row radial engine that had 18 cylinders. It put out 2,200 horsepower and weighed 2,350 lbs. Compared to the F4F, the F6F had better firepower and greater armor protection making it more reliable. In addition it came with the luxury of hydraulically actuated landing gear struts as opposed to the hand cranked landing gear in the F4F. The F6F Hellcat was designed to withstand significant damage. It had a higher cockpit for better visibility and also had a bullet resistant windshield with 212 lbs of cockpit armor along with armor protecting the oil and gas tanks. It has a maximum fuel of 250 gallons and can travel a distance of 1,090 miles with a ceiling of 37,300ft and a rate of climb at 2,980 ft/min. It was also designed to have short takeoff requirements for use on carriers. The aircraft had large wings for slow takeoff and landing speeds which made operation on a carrier much easier. The wings were held together with lock pins and could be folded back to be parallel with fuselage for easier storage. The Hellcat also had immense firepower, attached with a total of four .50-caliber high powered machine guns, accompanied by two 20mm cannons with total carrying weight of 2000 lbs in bombs.

The Hellcat rose to be the superior fighter aircraft and because of a such high demand, the F6F had the best production rate the aviation industry has ever seen. During the beginning stages of production it went from an experimental stage to operational employment in the short period of eighteen months and in the peak of the aircrafts production, Grumman was turning out one Hellcat per hour. In the short period of just three years time between 1942-1945 Grumman had made a total 12,275 F6F’s, producing twenty Hellcats a day. Surprisingly enough, the Grumman only produced two basic versions of the Hellcat, the F6F-3, and F6F-5 but had many prototypes. The XF6F-1, F6F-3, and F6F-5 were the only models that had noticeable differences. The first prototype was the F6F-1 and it had a 1600hp Wright R-2600-10 Cyclone two stage radial engine but did not make enough power. Thus, Grumman revised the plane and added turbocharged Wright R-2800-21 engine and named it the F6F-2. The F6F still seemed to not make enough power to compete with the Japanese Zero. As a result the famous F6F-3 was made and had a two stage supercharger version of the Pratt & Whitney R-2800-10 double wasp engine that was in the F6F-5, but only made 2000 horsepower. The F6F-3 was Grumman’s first version of the Hellcat and produced 4,403 by 1944 but still had a few issues, Steven Wilkinson’s thoughts on the F6F-3 were that The big bird didn’t want to turn. The F6F-3’s aileron were unpleasantly heavy and ineffectual at high speeds, (Wilkinson, S). The F6F-5 solved this issue by the addition of aileron spring tabs. The final model added an additional 200 horsepower making a total of 2,200 horsepower and was modified to fit bombs and a different arrangement of guns under its wing. The Hellcat was modified to have a bulletproof windshield and as well, came with an improved cowling to give pilots better vision. The F6F-5 was also modified to put out more power through the installation of water injection. Almost immediately after production was started, the Hellcat became the Navy’s primary fighter aircraft in the second half of the war and made a name for itself.

It was accounted for 5,156 enemy aircrafts destroyed and responsible for 75 percent of the air to air victories. As Steven Sherman puts it, In the critical years of 1943 and 1944, the Hellcat ruled the skies of the western pacific(Sherman S.). It had a 19:1 kill-to-loss ratio and excelled in ground attack due to a fast dive speed. Pilots also described the Hellcat as relatively easy to fly. In fact, the Hellcat earned the nickname of the Ace Maker as a result of a lot of pilots earning the ace title in combat. The A6M2 Zero stood no chance against the F6F Hellcat. The Hellcat was an average of 30 mph faster than the Zero at all altitudes with a faster rate of climb. The Hellcat also had reinforced armor that made it able to withstand severe damage while the Zero had a thin and lightweight body which made taking it down easy for the Hellcat. The F6F could easily outrun the Zero and had a faster dive speed making it easy for american pilots to out maneuver the japanese. The only advantage of the Zero was that it could outturn the american Hellcat but only low speeds. In this situation, american pilots were instructed to avoid dogfights and utilize their superior power and high speed performance(Hickman, Kennedy). The Hellcat was highly victorious and became quickly feared. The F6F-5 developed a reputation as a superior fighter and other countries became interested. 1,263 Hellcats were given to the British Royal Navy under the Lend Lease Act in the ending years of world war II between the year 1944 and 1945. Once the war came to an end, The Hellcat still remained the star of it all but was eventually replaced with the F8F Bearcat. After being superseded by the Bearcat, there were plenty of Hellcats remaining that still had to serve some purpose. The Hellcat remained in service with the Navy as night fighter and was also used as a drone for anti aircraft target practice. It was then later was used for training for beginner Navy pilots until it was retired in 1954. The French also found a use for the Hellcat in the Indochina War between the years of 1946 and 1954. In addition, The Uruguayan Navy also had use for the Hellcat until the early 1960’s. The U.S Navy’s Blue Angels also used the Hellcat as the first plane they used in 1946 but was eventually replaced in favor of the Bearcat. Hellcats are found today across the world on display in its well deserved spot in manya plethora of air museums.

The Hellcat will always be considered a victorious and superior fighter aircraft in the aviation community. Its history and important role and what it did for the U.S Navy against the japanese in world war II shall never be forgotten.

The Backbone of the U.S Navy in World War II. (2020, May 07). Retrieved from https://papersowl.com/examples/the-backbone-of-the-u-s-navy-in-world-war-ii/

Air Force at the End of World War II