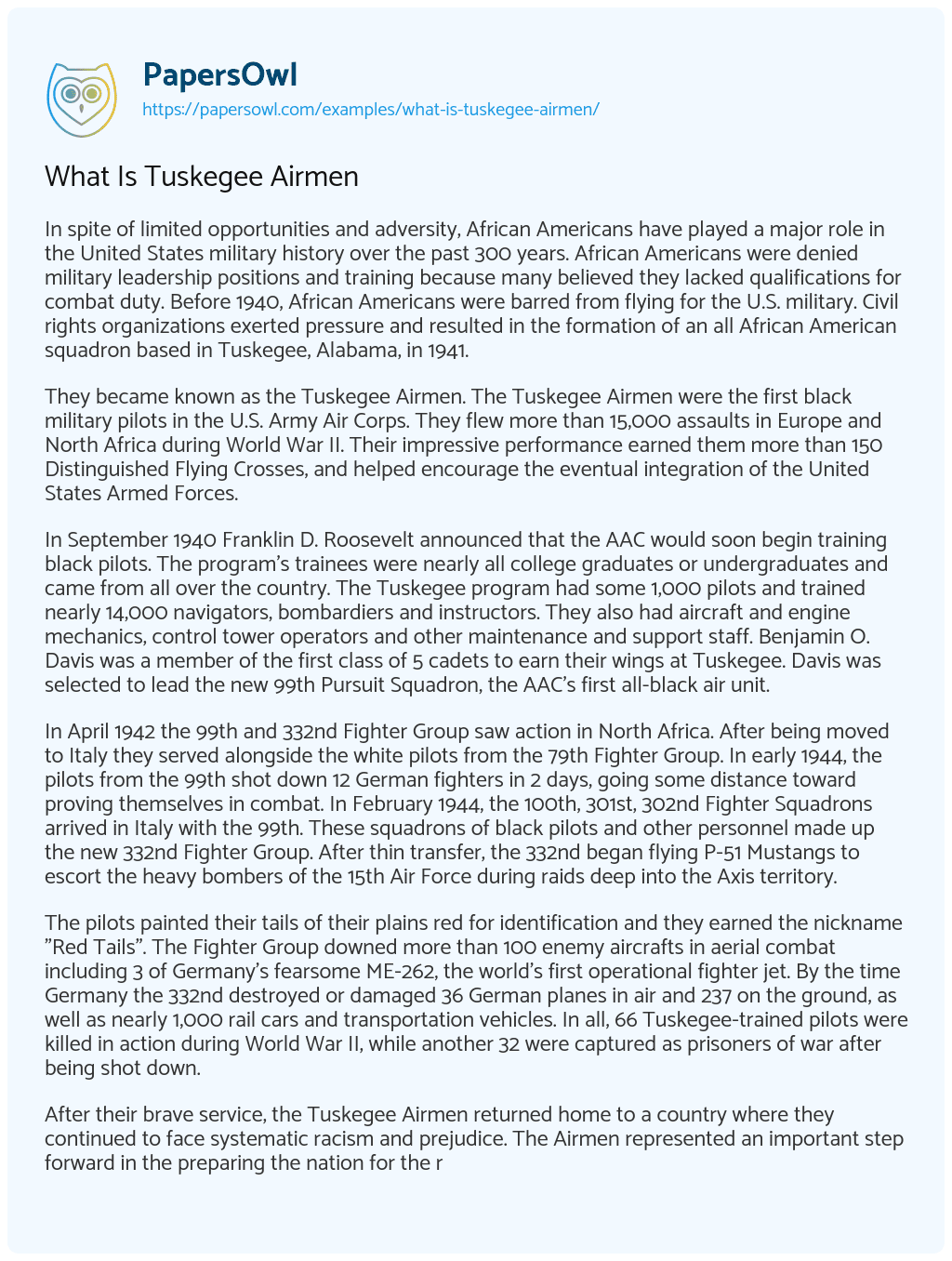 They became known as the Tuskegee Airmen. The Tuskegee Airmen were the first black military pilots in the U.S. Army Air Corps. They flew more than 15,000 assaults in Europe and North Africa during World War II. Their impressive performance earned them more than 150 Distinguished Flying Crosses, and helped encourage the eventual integration of the United States Armed Forces.

In September 1940 Franklin D. Roosevelt announced that the AAC would soon begin training black pilots. The program’s trainees were nearly all college graduates or undergraduates and came from all over the country. The Tuskegee program had some 1,000 pilots and trained nearly 14,000 navigators, bombardiers and instructors. They also had aircraft and engine mechanics, control tower operators and other maintenance and support staff. Benjamin O. Davis was a member of the first class of 5 cadets to earn their wings at Tuskegee. Davis was selected to lead the new 99th Pursuit Squadron, the AAC’s first all-black air unit.

In April 1942 the 99th and 332nd Fighter Group saw action in North Africa. After being moved to Italy they served alongside the white pilots from the 79th Fighter Group. In early 1944, the pilots from the 99th shot down 12 German fighters in 2 days, going some distance toward proving themselves in combat. In February 1944, the 100th, 301st, 302nd Fighter Squadrons arrived in Italy with the 99th. These squadrons of black pilots and other personnel made up the new 332nd Fighter Group. After thin transfer, the 332nd began flying P-51 Mustangs to escort the heavy bombers of the 15th Air Force during raids deep into the Axis territory.

The pilots painted their tails of their plains red for identification and they earned the nickname “Red Tails”. The Fighter Group downed more than 100 enemy aircrafts in aerial combat including 3 of Germany’s fearsome ME-262, the world’s first operational fighter jet. By the time Germany the 332nd destroyed or damaged 36 German planes in air and 237 on the ground, as well as nearly 1,000 rail cars and transportation vehicles. In all, 66 Tuskegee-trained pilots were killed in action during World War II, while another 32 were captured as prisoners of war after being shot down.

After their brave service, the Tuskegee Airmen returned home to a country where they continued to face systematic racism and prejudice. The Airmen represented an important step forward in the preparing the nation for the racial integration of the military. In 1948 President Truman and his executive order demanded equality of opportunity and treatment within the U.S. armed forces. Benjamin O. Davis would become the first black general in the United States Air Force. George S. “Spanky” Roberts became the first black commander of a racially integrated Air Force unit before retiring as a colonel.

In Daniel “Chappie” James Jr. would become the nation’s first black four-star general. On November 6, 1998, President Clinton approved Public Law 105-355, which established the Tuskegee Airmen National Historic Site at Moton Field in Tuskegee, Alabama, to commemorate the brave and heroic actions of the Tuskegee Airmen during World War II. More than 300 of the original Airmen were on hand to receive the Congressional Gold Medal from George W. Bush in 2007. In 2009, the surviving Tuskegee Airmen and support crew were invited to attend the inauguration of Barack Obama. Obama wrote that “his Career in public service was made possible by the path heroes like the Tuskegee Airmen trail-blazed”.

In conclusion, the Tuskegee Airmen overcame segregation and prejudice to become one of the most highly respected Fighter Groups of World War II. They successfully proved that African Americans could fly and maintain a sophisticated combat aircraft. The Tuskegee Airmen’s achievements paved the way for full integration of the United States military.

What Is Tuskegee Airmen. (2019, Apr 28). Retrieved from https://papersowl.com/examples/what-is-tuskegee-airmen/

Racism and Research: the Case of the Tuskegee Syphilis

Atlanta Compromise: the Future of an American Negro