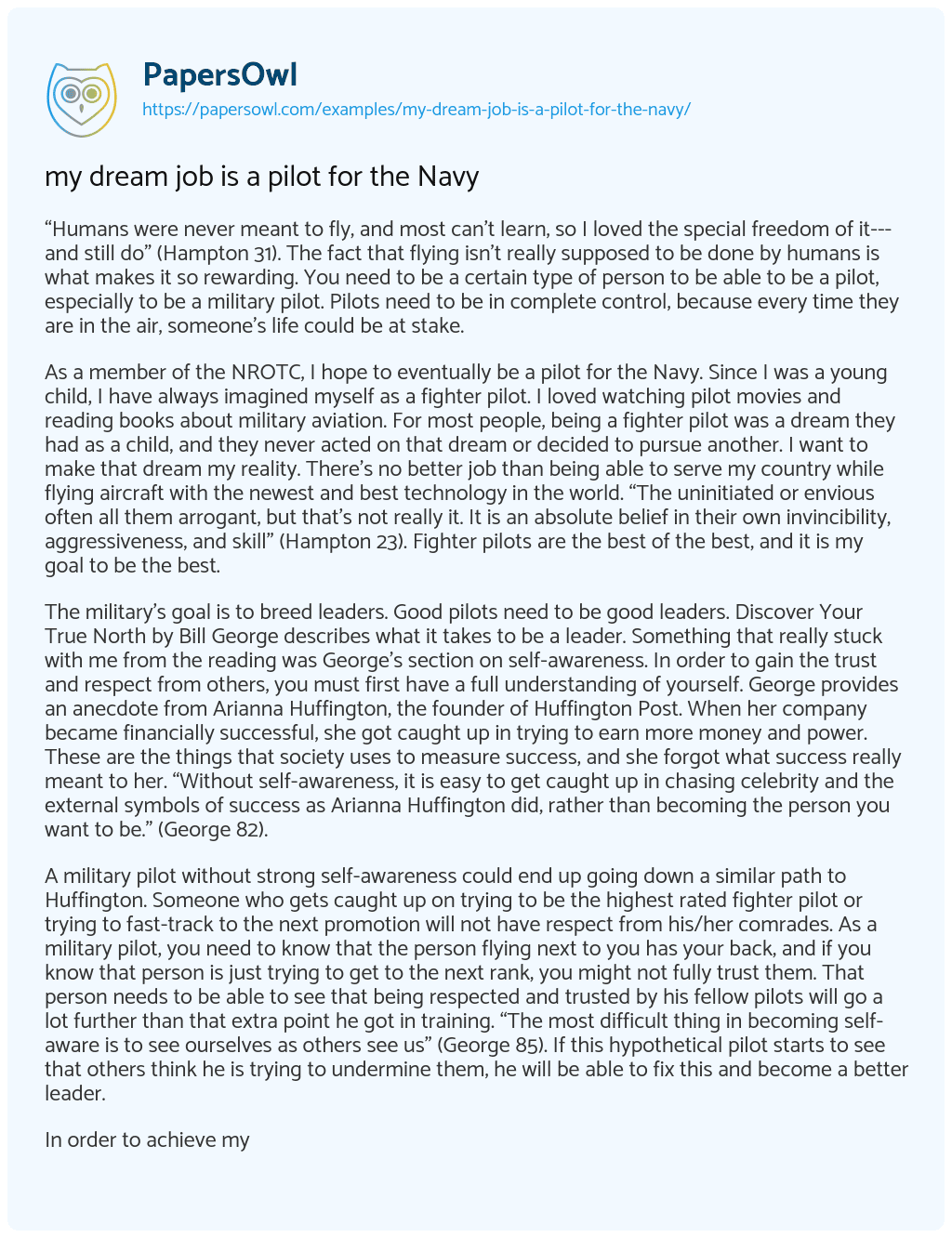 “Humans were never meant to fly, and most can’t learn, so I loved the special freedom of it—and still do” (Hampton 31). The fact that flying isn’t really supposed to be done by humans is what makes it so rewarding. You need to be a certain type of person to be able to be a pilot, especially to be a military pilot. Pilots need to be in complete control, because every time they are in the air, someone’s life could be at stake.

As a member of the NROTC, I hope to eventually be a pilot for the Navy. Since I was a young child, I have always imagined myself as a fighter pilot. I loved watching pilot movies and reading books about military aviation. For most people, being a fighter pilot was a dream they had as a child, and they never acted on that dream or decided to pursue another. I want to make that dream my reality. There’s no better job than being able to serve my country while flying aircraft with the newest and best technology in the world. “The uninitiated or envious often all them arrogant, but that’s not really it. It is an absolute belief in their own invincibility, aggressiveness, and skill” (Hampton 23). Fighter pilots are the best of the best, and it is my goal to be the best.

The military’s goal is to breed leaders. Good pilots need to be good leaders. Discover Your True North by Bill George describes what it takes to be a leader. Something that really stuck with me from the reading was George’s section on self-awareness. In order to gain the trust and respect from others, you must first have a full understanding of yourself. George provides an anecdote from Arianna Huffington, the founder of Huffington Post. When her company became financially successful, she got caught up in trying to earn more money and power. These are the things that society uses to measure success, and she forgot what success really meant to her. “Without self-awareness, it is easy to get caught up in chasing celebrity and the external symbols of success as Arianna Huffington did, rather than becoming the person you want to be.” (George 82).

A military pilot without strong self-awareness could end up going down a similar path to Huffington. Someone who gets caught up on trying to be the highest rated fighter pilot or trying to fast-track to the next promotion will not have respect from his/her comrades. As a military pilot, you need to know that the person flying next to you has your back, and if you know that person is just trying to get to the next rank, you might not fully trust them. That person needs to be able to see that being respected and trusted by his fellow pilots will go a lot further than that extra point he got in training. “The most difficult thing in becoming self-aware is to see ourselves as others see us” (George 85). If this hypothetical pilot starts to see that others think he is trying to undermine them, he will be able to fix this and become a better leader.

In order to achieve my goal of becoming a fighter pilot, I will need many years and hundreds of thousands of dollars in training. I plan to get my PPL here at OSU which will allow me to skip the first 6 weeks of basic flight knowledge training in the Navy. From there will be about 3 years of flight and weapons training. During these three years, I will go through drown-proof training and prisoner of war training. These are known to be extremely vigorous. Dan Hampton, a former Air Force fighter pilot, went through these training programs. He noted that these programs brought him down to earth and made him remember his purpose. “I began to develop the small, disconcerting notion that I wasn’t nearly as important as I thought I was” (Hampton 42).

Dan Hampton is the physical embodiment of what a fighter pilot is supposed to be. He went through the vigorous training all with a smile on his face. He was called upon constantly to do things with the aircraft that are nearly impossible. No matter what the task was, Hampton was ready to step up. “Fighter pilots tend to rise to the occasion” (Hampton 157).

During the first 10 days of NROTC training, we went through an intense week of training. During this week, we were pushed to our limits physically and mentally with little amounts of sleep. The Marine Instructor repeatedly told us to “Remember your Why”. He wanted us to remember our purpose as the training got harder. When reading Discover Your True North, the Purpose section took me back to those 10 days of training and those words from the instructor. A good leader will always remember their purpose and their purpose will get them through the toughest of times.

An anecdote that interested me from Discover Your True North is that of Seth Moulton. Moulton’s purpose was public service. He wanted to serve his country the best he could. That is why he joined the Marine Corps. He then served four tours in Afghanistan. To do that many tours as a frontline infantry soldier, you need to have a strong purpose. After his time in the Marine Corps, he became a member of Congress to serve his country in a different way. Mouton’s purpose aligns with what I believe my purpose is. I think I can make it through all the training needed to become a fighter pilot because I know I want to serve my country, and I want to do it by flying jets.

The average US Navy fighter pilot makes between $71,120 and $150,000 per year depending on their rank (Glassdoor). The Navy also pays for housing and medical insurance. With those two benefits, the salary is really worth more than a civilian making that much per year. The Navy rotates assignments, so you usually have two years on an aircraft carrier out at sea, then two years at shore. During your shore duty, you have many options, such as going back to school, working on a ported ship, or doing training flights.

During my time in the Navy, I plan to use my shore duty as a time to gain a Commercial Pilot’s License. One benefit of the Navy is not all my time will be spent on a carrier and flying jets. I will be able to get post-graduate education while still being a member of the Navy. I will also be getting a large amount of flight hours during my time in the Navy, and I will be able to get a restricted ATP because of military experience. After my time in the military, I hope to get a job for an airline as a Commercial Pilot. Hopefully, military experience and a high number of flight hours will help me get a job at a national airline instead of having to work my way up from regionals.

As we learned in class, airlines need pilots and there will be a lot of pilots retiring in the next 5 -15 years. So, if I spend my required 10 years in the Navy, I could then move to an airline in the middle of the shortage.

my dream job is a pilot for the Navy. (2021, Oct 18). Retrieved from https://papersowl.com/examples/my-dream-job-is-a-pilot-for-the-navy/

The Backbone of the U.S Navy in World War II