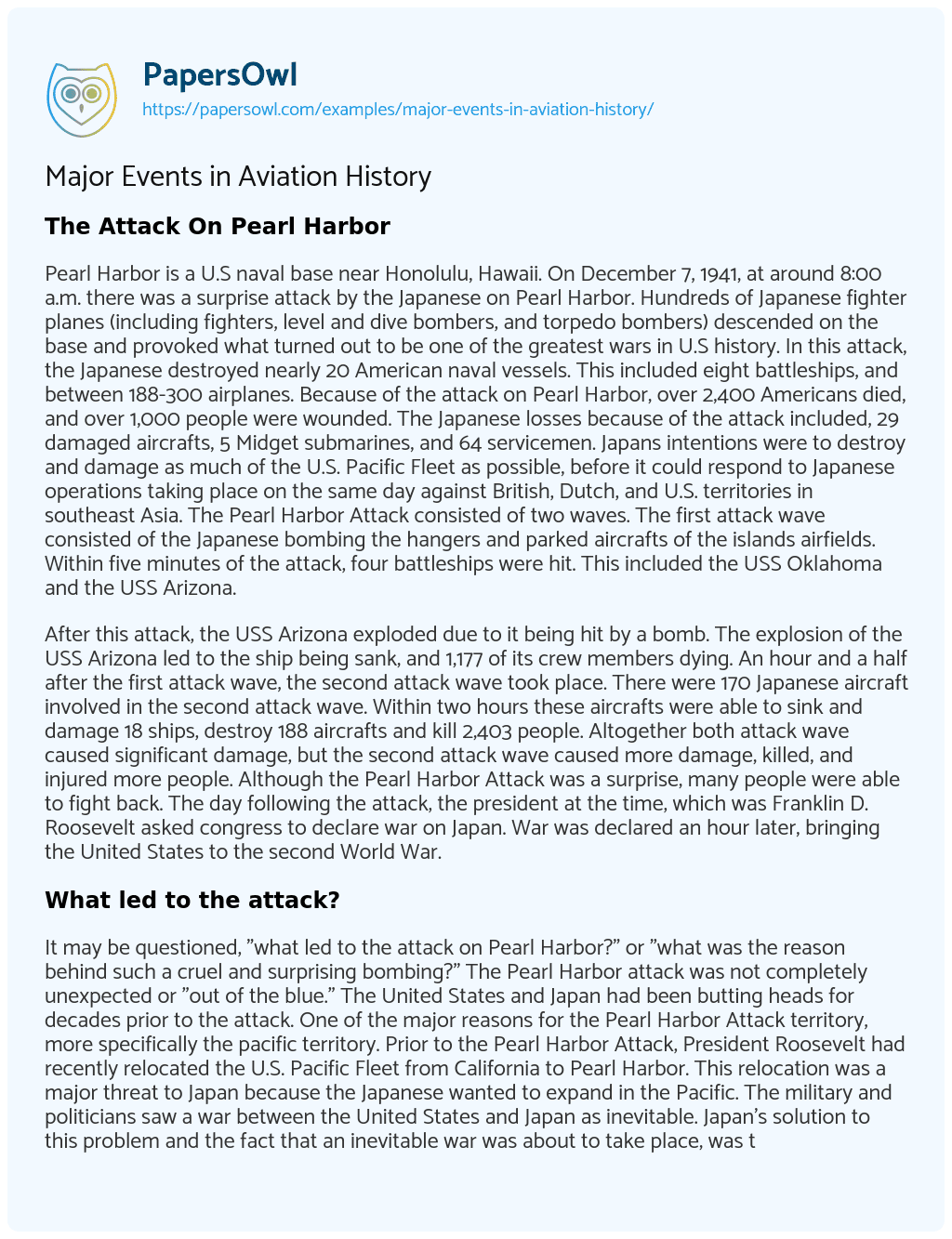 The Attack On Pearl Harbor

Pearl Harbor is a U.S naval base near Honolulu, Hawaii. On December 7, 1941, at around 8:00 a.m. there was a surprise attack by the Japanese on Pearl Harbor. Hundreds of Japanese fighter planes (including fighters, level and dive bombers, and torpedo bombers) descended on the base and provoked what turned out to be one of the greatest wars in U.S history. In this attack, the Japanese destroyed nearly 20 American naval vessels. This included eight battleships, and between 188-300 airplanes. Because of the attack on Pearl Harbor, over 2,400 Americans died, and over 1,000 people were wounded. The Japanese losses because of the attack included, 29 damaged aircrafts, 5 Midget submarines, and 64 servicemen. Japans intentions were to destroy and damage as much of the U.S. Pacific Fleet as possible, before it could respond to Japanese operations taking place on the same day against British, Dutch, and U.S. territories in southeast Asia. The Pearl Harbor Attack consisted of two waves. The first attack wave consisted of the Japanese bombing the hangers and parked aircrafts of the islands airfields. Within five minutes of the attack, four battleships were hit. This included the USS Oklahoma and the USS Arizona.

After this attack, the USS Arizona exploded due to it being hit by a bomb. The explosion of the USS Arizona led to the ship being sank, and 1,177 of its crew members dying. An hour and a half after the first attack wave, the second attack wave took place. There were 170 Japanese aircraft involved in the second attack wave. Within two hours these aircrafts were able to sink and damage 18 ships, destroy 188 aircrafts and kill 2,403 people. Altogether both attack wave caused significant damage, but the second attack wave caused more damage, killed, and injured more people. Although the Pearl Harbor Attack was a surprise, many people were able to fight back. The day following the attack, the president at the time, which was Franklin D. Roosevelt asked congress to declare war on Japan. War was declared an hour later, bringing the United States to the second World War.

What led to the attack?

How it Relates to Aviation

The Pearl Harbor attack was primarily a naval attack, but, the U.S Air Force got involved. You may think this worked in their advantage, but the Army Air Forces (AAF) suffered greatly and paid for the mistake of being ill prepared when the Japanese warplanes arrived. Some of the planes present during the Pearl Harbor attack were B-17 Flying Fortress, A-20 Havoc bombers, B-18 Bolo, P-40c and the P-40B Tomahawk fights. These aircrafts were all stationed at the Wheeler Field, however, they were unfueled and unarmed on the morning of December 7, 1941. It did not help that because the warnings had been ignored, the first attack wave took Wheeler Field, destroying and damaging the aircrafts that were stationed there. During the Pearl Harbor Attack 92 U.S navy planes and 77 U.S army planes were destroyed. In addition to this lost, 31 navy planes and 138 army planes sustained considerable damages. There were many aircrafts present as Japan attacked Pearl Harbor. One of the main aircrafts present in The Pearl Harbor bombing was the Aichi D3A (VAL) Carrier-Borne Bomber, aka the Dive Bomber. Prior to the Pearls Harbor Attack, the D3A series of aircrafts were believed to be extinct. The rude awakening came in the form of a surprise attack on Pearl Harbor.

The D3A’s made up the principal attack. They were used as carrier based bombers. Also present as Japan shortly dominated the U.S was the B-17 Flying Fortress Four- Engine Heavy Bomber Aircraft. The Boeing B-17 Flying Fortress was usually noticed as a more important heavy bomber. It played a substantial sole in World War II, which took place immediately after the Pearl Harbor Attack. The name Flying Fortress allegedly came from a reporter. Also present was the Boeing P- 26 Peashooter Monoplane Fighter Aircraft. The classic American –originated “Peashooter” arrived between wars. The monoplane fighter became the first all metal aircraft design for the United States. The Grumman Goose (G-21) Multirole Flying Boat Aircraft was also present.

The Grumman Goose was a hero in World War II. It helped with transport, training, and sea rescue operations. The G-21 was a high winged, twin engine aircraft, that eventually found use in the military as an armed patrol craft. The Grumman Goose was one of the aircrafts that were stations at Wheeler Airbase in Pearl Harbor. Many other aircrafts were present including the Douglas SBD Dauntless Carrier-Borne Dive Bomber Aircraft, the Douglas B-18 Bolo Medium Bomber Aircraft, he Curtiss P-40 WarHawk Fighter-Bomber/Fighter Aircraft, the Nakajima B5W (Kate) Carrier Borne Torpedo Bomber, and many others.

After the Attack on pearl Harbor

The day immediately after the Pearl Harbor Attack, war was declared. This was the commencement of World War II. World War II lasted for a period of 6 years, which led to the death of between 50 million and 80 million people. It is said that the U.S. and Russia won this war, and Japan was unable to expand as it desired to. So in essence, the attack on Pearl Harbor didn’t give Japan thee ending result that they desired.