Relationship between Women Inequality and Poverty 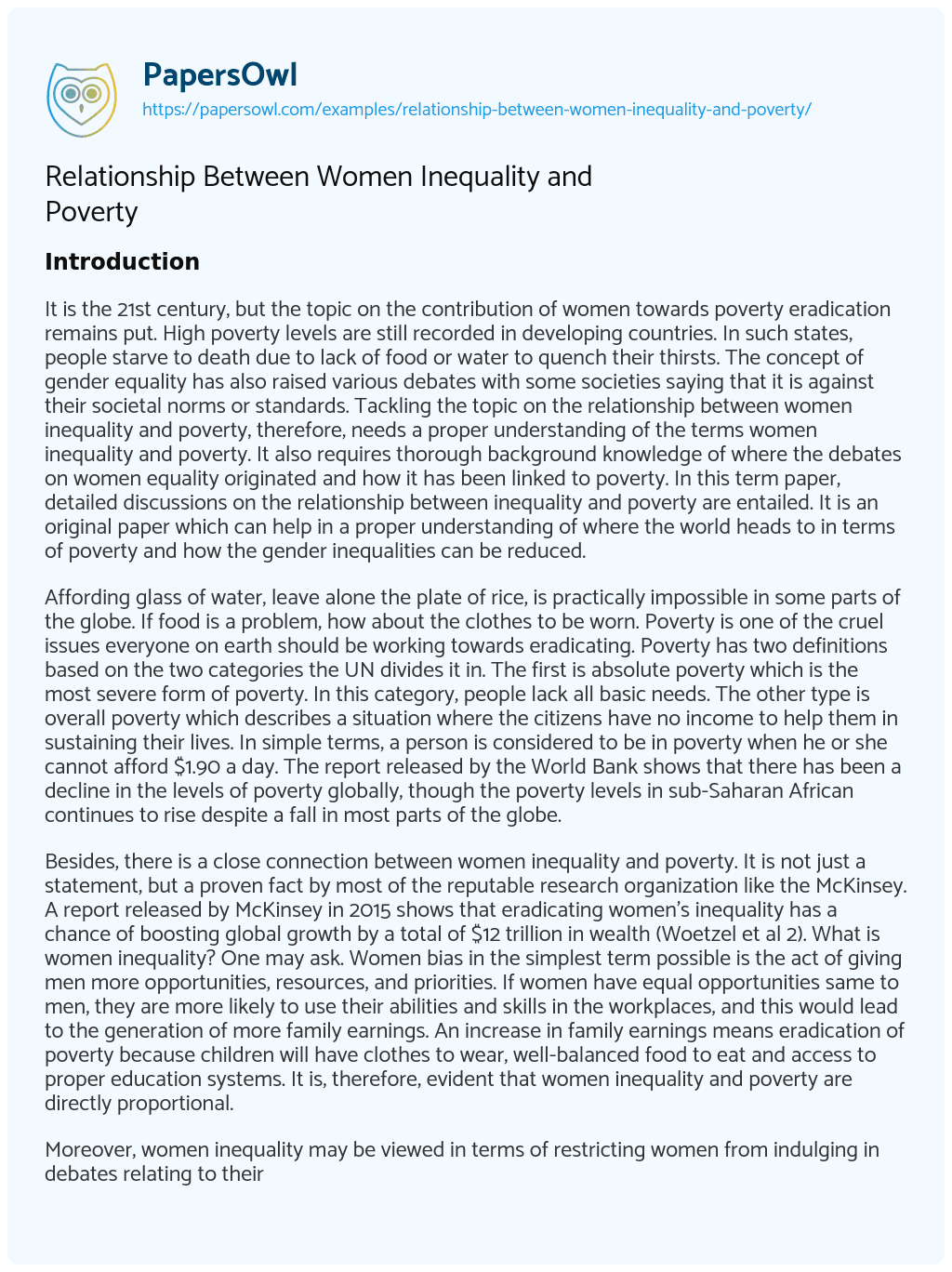 It is the 21st century, but the topic on the contribution of women towards poverty eradication remains put. High poverty levels are still recorded in developing countries. In such states, people starve to death due to lack of food or water to quench their thirsts. The concept of gender equality has also raised various debates with some societies saying that it is against their societal norms or standards. Tackling the topic on the relationship between women inequality and poverty, therefore, needs a proper understanding of the terms women inequality and poverty. It also requires thorough background knowledge of where the debates on women equality originated and how it has been linked to poverty. In this term paper, detailed discussions on the relationship between inequality and poverty are entailed. It is an original paper which can help in a proper understanding of where the world heads to in terms of poverty and how the gender inequalities can be reduced.

Affording glass of water, leave alone the plate of rice, is practically impossible in some parts of the globe. If food is a problem, how about the clothes to be worn. Poverty is one of the cruel issues everyone on earth should be working towards eradicating. Poverty has two definitions based on the two categories the UN divides it in. The first is absolute poverty which is the most severe form of poverty. In this category, people lack all basic needs. The other type is overall poverty which describes a situation where the citizens have no income to help them in sustaining their lives. In simple terms, a person is considered to be in poverty when he or she cannot afford $1.90 a day. The report released by the World Bank shows that there has been a decline in the levels of poverty globally, though the poverty levels in sub-Saharan African continues to rise despite a fall in most parts of the globe.

Besides, there is a close connection between women inequality and poverty. It is not just a statement, but a proven fact by most of the reputable research organization like the McKinsey. A report released by McKinsey in 2015 shows that eradicating women’s inequality has a chance of boosting global growth by a total of $12 trillion in wealth (Woetzel et al 2). What is women inequality? One may ask. Women bias in the simplest term possible is the act of giving men more opportunities, resources, and priorities. If women have equal opportunities same to men, they are more likely to use their abilities and skills in the workplaces, and this would lead to the generation of more family earnings. An increase in family earnings means eradication of poverty because children will have clothes to wear, well-balanced food to eat and access to proper education systems. It is, therefore, evident that women inequality and poverty are directly proportional.

Moreover, women inequality may be viewed in terms of restricting women from indulging in debates relating to their communities (Kabeern189). One of the proper ways in which women can have a voice in a community is to allow them to vote and do whatever other gender does without any form of restrictions. When women are given a chance to take part in decision making by voting for healthcare issues and matters to do with child health, they are more likely to cause a change (Crespo et al. 14). The change may be in terms of advocating for better policies which reduce the children mortality rates. A drop in the child mortality rate is a clear indicator of poverty reduction in a given area. Moreover, through the voting system, women can have a chance to elect leaders who can help in uplifting the country’s economy. The world population statistic shows that women are the highest when it comes to the compassion of the total global population by gender. When given a chance, they can help in shaping the world and eradicating poverty.

Furthermore, women inequality in terms of formal education has been linked to poverty and slow economic growth in many countries. In many developing countries, girl-child’s education is not given a higher priority. Instead of educating the girl-child through formal education, they are trained to take part in house chores and other home duties which do not impact much on their lives (Kabeer 193). The girls are, therefore, limited from pursuing the academic fields and becoming professionals in their areas of study. This a lone can be linked to reduced economic growth. Such societal norms reduce the number of skilled labor force a society would have possessed. Economic growth is measured in terms of the citizens’ outputs both in terms of revenue and quantity produced. It is therefore right to say that societies, where women do not get involved in active labor, have slow economic growth. Comparison Between poverty and women inequality in a developing country (Nigeria) to a developed country (like the United States)?

The level of poverty in the United States is generally lower compared to that in Nigeria. The 2019 report released by the World Bank indicates that over ninety-one million Nigerians live in extreme poverty. Comparing this to the United States’ latest poverty report of only 18.5 million poverty shows that people there is a huge difference in the rates of poverty in developed and developing countries. The World Bank 2019 report shows that poor individuals spend less than $1.90 a day (White 13). Moreover, a research report released by Brookings Institution in 2018 is line with the World Banks’s report on Nigeria’s poverty level. Brookings Institution named Nigeria as the capital of the World’s poverty with over 86 million living in life-threatening poverty levels.

?Moreover, both the United States and Nigeria are fighting women inequality. In America, the women inequality is viewed in terms of unequal pay and maintaining top corporate seats for men while in Nigeria; it starts from the child’s education and the societal norms demeaning women’s worth. The fact remains that poverty exists both in developing and developed countries with the latter recording a lower poverty rate compared to the former (White03). Also, women inequality is present in both countries, what differs is the extent and contexts discussed.

Relationship Between Women Inequality and Poverty. (2021, May 29). Retrieved from https://papersowl.com/examples/relationship-between-women-inequality-and-poverty/

Spatial Aspects of Poverty and Inequality