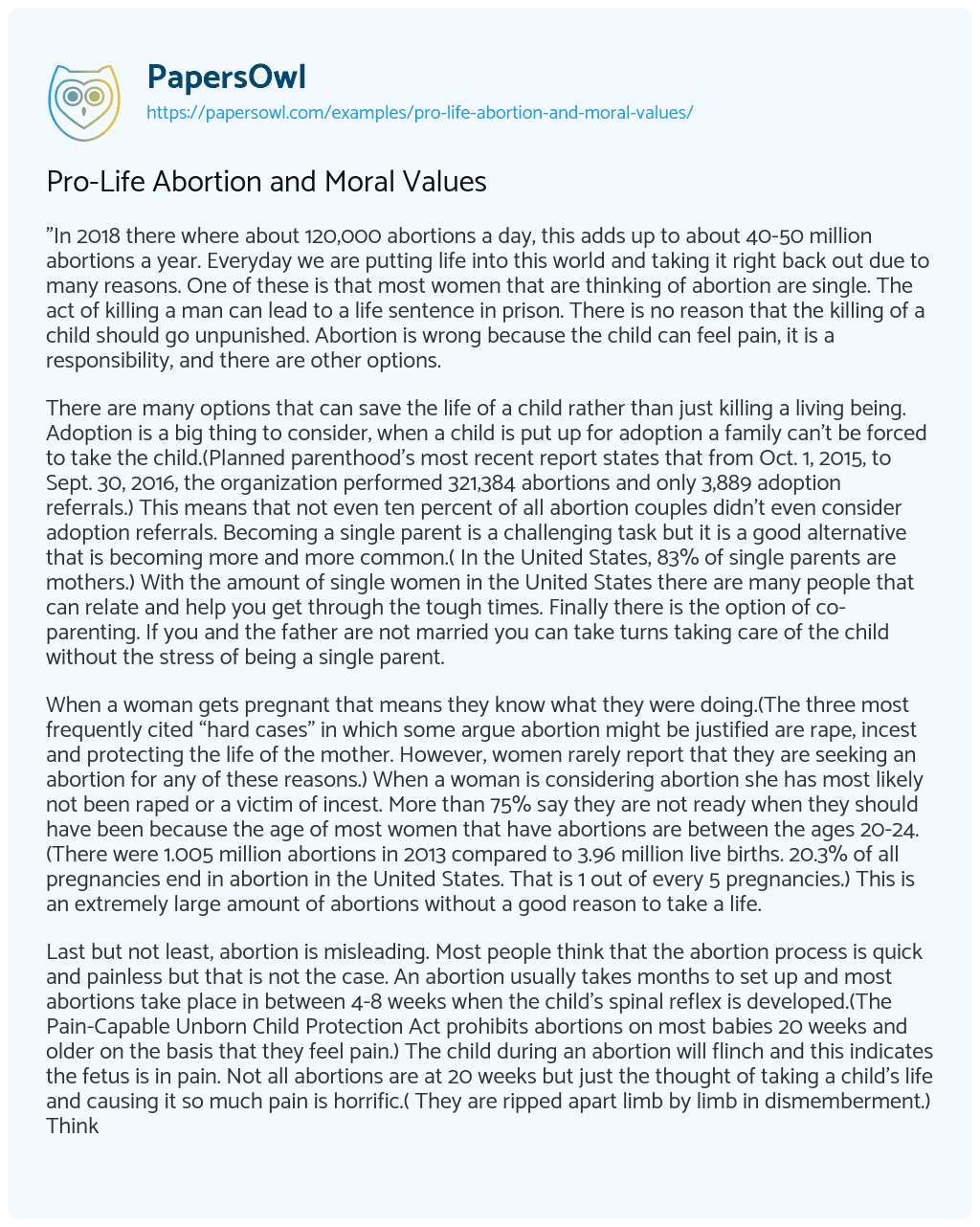 “In 2018 there where about 120,000 abortions a day, this adds up to about 40-50 million abortions a year. Everyday we are putting life into this world and taking it right back out due to many reasons. One of these is that most women that are thinking of abortion are single. The act of killing a man can lead to a life sentence in prison. There is no reason that the killing of a child should go unpunished. Abortion is wrong because the child can feel pain, it is a responsibility, and there are other options.

There are many options that can save the life of a child rather than just killing a living being. Adoption is a big thing to consider, when a child is put up for adoption a family can’t be forced to take the child.(Planned parenthood’s most recent report states that from Oct. 1, 2015, to Sept. 30, 2016, the organization performed 321,384 abortions and only 3,889 adoption referrals.) This means that not even ten percent of all abortion couples didn’t even consider adoption referrals. Becoming a single parent is a challenging task but it is a good alternative that is becoming more and more common.( In the United States, 83% of single parents are mothers.) With the amount of single women in the United States there are many people that can relate and help you get through the tough times. Finally there is the option of co-parenting. If you and the father are not married you can take turns taking care of the child without the stress of being a single parent.

When a woman gets pregnant that means they know what they were doing.(The three most frequently cited “hard cases” in which some argue abortion might be justified are rape, incest and protecting the life of the mother. However, women rarely report that they are seeking an abortion for any of these reasons.) When a woman is considering abortion she has most likely not been raped or a victim of incest. More than 75% say they are not ready when they should have been because the age of most women that have abortions are between the ages 20-24.(There were 1.005 million abortions in 2013 compared to 3.96 million live births. 20.3% of all pregnancies end in abortion in the United States. That is 1 out of every 5 pregnancies.) This is an extremely large amount of abortions without a good reason to take a life.

Last but not least, abortion is misleading. Most people think that the abortion process is quick and painless but that is not the case. An abortion usually takes months to set up and most abortions take place in between 4-8 weeks when the child’s spinal reflex is developed.(The Pain-Capable Unborn Child Protection Act prohibits abortions on most babies 20 weeks and older on the basis that they feel pain.) The child during an abortion will flinch and this indicates the fetus is in pain. Not all abortions are at 20 weeks but just the thought of taking a child’s life and causing it so much pain is horrific.( They are ripped apart limb by limb in dismemberment.) Think about getting in a torture device that tears your limbs apart and that is what most experts say that’s what it feels like. This is reason enough to make anyone reconsider abortion.

Abortion is never an alternative to life and should never be considered over the option of giving the child a chance at life. There has not been a case where there is an abortion needed to save a woman’s life and there will never be a case if people will own up to what they have done and take action. When a mother or couple get to scared of what is going to happen they think of abortion as an easy way out or a reset button but that is wrong. Abortions are wrong and should never take place with so many alternatives and so many people that are willing to help.”

Let’s Talk about my Abortion Article