Powerful Women in Death of a Salesman 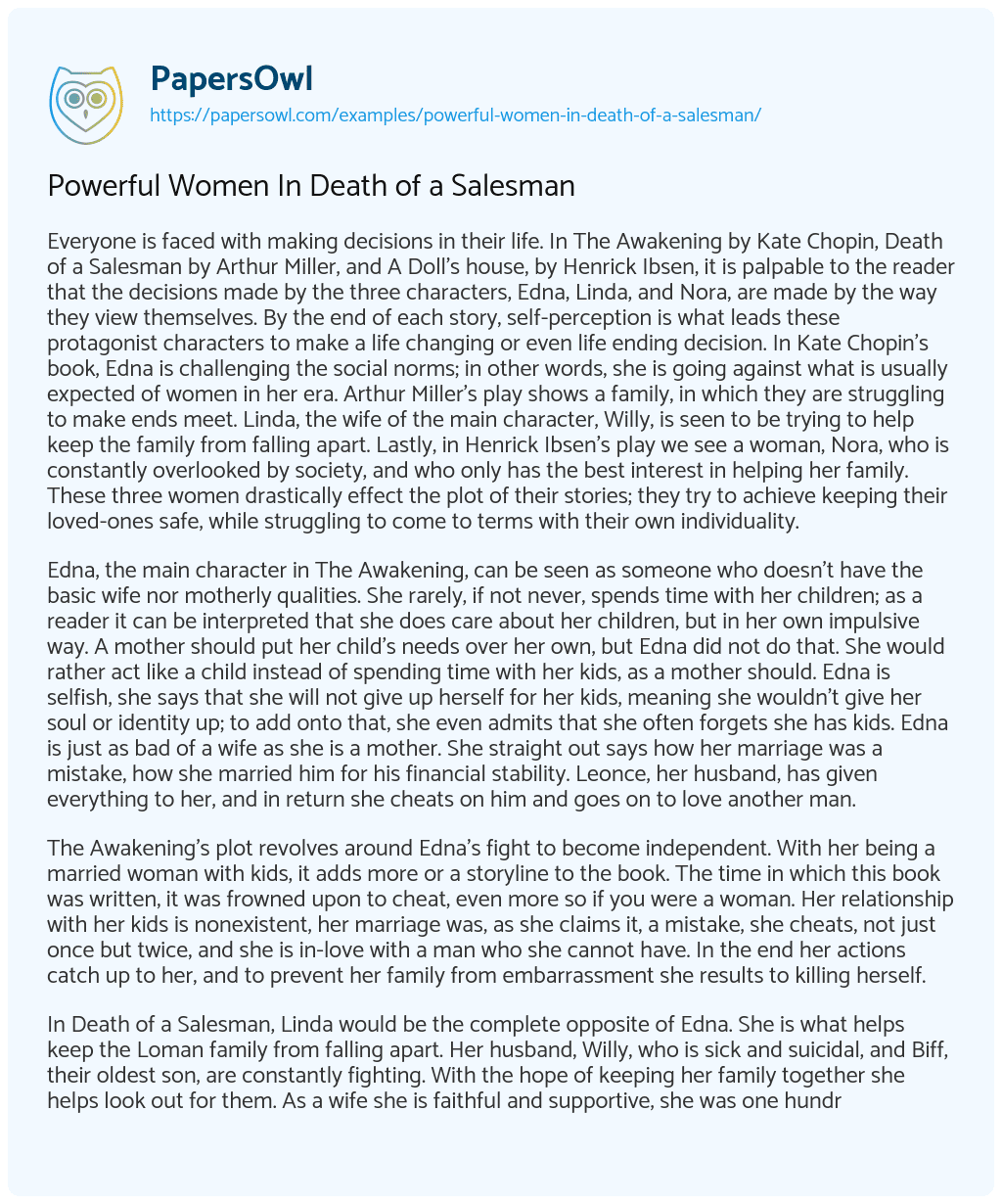 Everyone is faced with making decisions in their life. In The Awakening by Kate Chopin, Death of a Salesman by Arthur Miller, and A Doll’s house, by Henrick Ibsen, it is palpable to the reader that the decisions made by the three characters, Edna, Linda, and Nora, are made by the way they view themselves. By the end of each story, self-perception is what leads these protagonist characters to make a life changing or even life ending decision. In Kate Chopin’s book, Edna is challenging the social norms; in other words, she is going against what is usually expected of women in her era. Arthur Miller’s play shows a family, in which they are struggling to make ends meet. Linda, the wife of the main character, Willy, is seen to be trying to help keep the family from falling apart. Lastly, in Henrick Ibsen’s play we see a woman, Nora, who is constantly overlooked by society, and who only has the best interest in helping her family. These three women drastically effect the plot of their stories; they try to achieve keeping their loved-ones safe, while struggling to come to terms with their own individuality.

Edna, the main character in The Awakening, can be seen as someone who doesn’t have the basic wife nor motherly qualities. She rarely, if not never, spends time with her children; as a reader it can be interpreted that she does care about her children, but in her own impulsive way. A mother should put her child’s needs over her own, but Edna did not do that. She would rather act like a child instead of spending time with her kids, as a mother should. Edna is selfish, she says that she will not give up herself for her kids, meaning she wouldn’t give her soul or identity up; to add onto that, she even admits that she often forgets she has kids. Edna is just as bad of a wife as she is a mother. She straight out says how her marriage was a mistake, how she married him for his financial stability. Leonce, her husband, has given everything to her, and in return she cheats on him and goes on to love another man.

The Awakening’s plot revolves around Edna’s fight to become independent. With her being a married woman with kids, it adds more or a storyline to the book. The time in which this book was written, it was frowned upon to cheat, even more so if you were a woman. Her relationship with her kids is nonexistent, her marriage was, as she claims it, a mistake, she cheats, not just once but twice, and she is in-love with a man who she cannot have. In the end her actions catch up to her, and to prevent her family from embarrassment she results to killing herself.

In Death of a Salesman, Linda would be the complete opposite of Edna. She is what helps keep the Loman family from falling apart. Her husband, Willy, who is sick and suicidal, and Biff, their oldest son, are constantly fighting. With the hope of keeping her family together she helps look out for them. As a wife she is faithful and supportive, she was one hundred percent devoted to her husband. Although as a reader, we know the only reason why she is so devoted is due to the fact that she is naïve. She refused to see through her husband’s lies, which ultimately leaves her clueless. While as a mother it is quite palpable that she doesn’t care for her kids as much as she does for her husband. She repetitively sticks up for her husband, even when her kids are right, and Willy is in the wrong. She even kicked out her children when their behavior threatened to make Willy upset.

Linda knows that Willy is suicidal and difficult to deal with; however, she continues to go along with Willy’s fantasies in order to shelter him from the condemnation of others, as well as his own self-criticism. Linda is the reason why her sons have a relationship with Willy. She is the sole reason as to why their family has not crumbled to shambles.

The play, A Doll’s House shows the sacrificial role that was expected of women in society. In this play, the reader follows along with Nora’s journey to come to terms with individuality, similar to what Edna was trying to do. Like Edna, Nora didn’t have much of a connection with her kids; in fact, Torvald, Nora’s husband, treated her like a kid. He calls her pet names, such as “little squirrel” and he even goes as far as to call her a child to her face. Nora is what one would say is extremely complaisant; she wants nothing more than to please her husband. Women in her society are expected to do as the husband wishes, therefore, her way of acting doesn’t correspond with the way she sees herself.

Nora was so blinded by society’s expectations that she committed a crime to save her husband’s life and help them from financial problems. Nora kept this a secret from Torvald because she didn’t want to ruin her family’s reputation, but in the end Torvald finds out and demeans her. She goes on to tell him that their strangers and, just like Edna, their marriage was never real. She says how she was never viewed as a wife to him, but in his perspective, she was just a doll.

These three women all struggle to come to terms with their individuality. The way that they view themselves has a drastic outcome on how the story unfolds. Self-perception can be so powerful that it can lead to life changing situations, and even sometimes be life-ending.

Powerful Women In Death of a Salesman. (2021, Jan 25). Retrieved from https://papersowl.com/examples/powerful-women-in-death-of-a-salesman/

Dysfunctional Family in Death of a Salesman