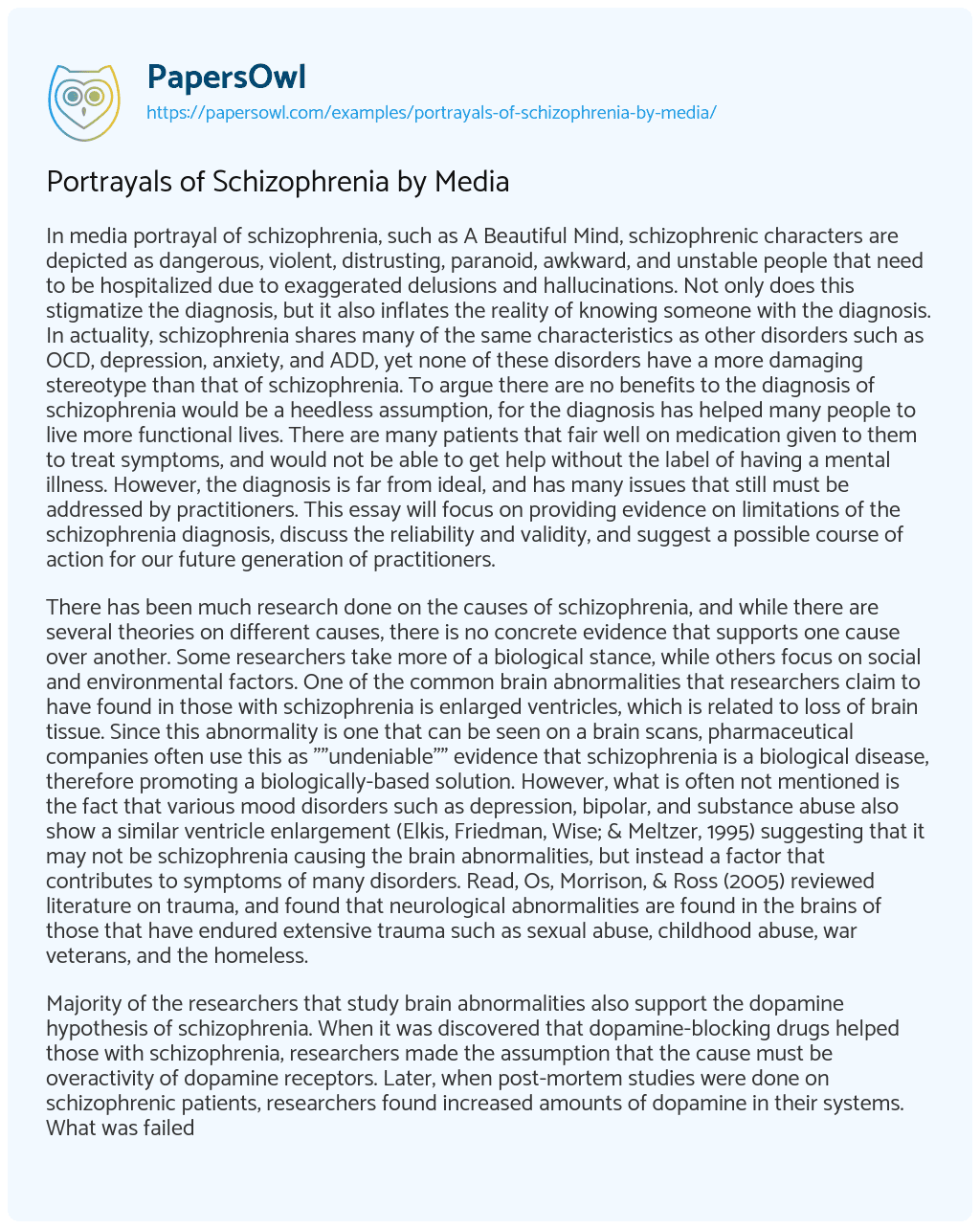 In media portrayal of schizophrenia, such as A Beautiful Mind, schizophrenic characters are depicted as dangerous, violent, distrusting, paranoid, awkward, and unstable people that need to be hospitalized due to exaggerated delusions and hallucinations. Not only does this stigmatize the diagnosis, but it also inflates the reality of knowing someone with the diagnosis. In actuality, schizophrenia shares many of the same characteristics as other disorders such as OCD, depression, anxiety, and ADD, yet none of these disorders have a more damaging stereotype than that of schizophrenia. To argue there are no benefits to the diagnosis of schizophrenia would be a heedless assumption, for the diagnosis has helped many people to live more functional lives. There are many patients that fair well on medication given to them to treat symptoms, and would not be able to get help without the label of having a mental illness. However, the diagnosis is far from ideal, and has many issues that still must be addressed by practitioners. This essay will focus on providing evidence on limitations of the schizophrenia diagnosis, discuss the reliability and validity, and suggest a possible course of action for our future generation of practitioners.

There has been much research done on the causes of schizophrenia, and while there are several theories on different causes, there is no concrete evidence that supports one cause over another. Some researchers take more of a biological stance, while others focus on social and environmental factors. One of the common brain abnormalities that researchers claim to have found in those with schizophrenia is enlarged ventricles, which is related to loss of brain tissue. Since this abnormality is one that can be seen on a brain scans, pharmaceutical companies often use this as “”undeniable”” evidence that schizophrenia is a biological disease, therefore promoting a biologically-based solution. However, what is often not mentioned is the fact that various mood disorders such as depression, bipolar, and substance abuse also show a similar ventricle enlargement (Elkis, Friedman, Wise; & Meltzer, 1995) suggesting that it may not be schizophrenia causing the brain abnormalities, but instead a factor that contributes to symptoms of many disorders. Read, Os, Morrison, & Ross (2005) reviewed literature on trauma, and found that neurological abnormalities are found in the brains of those that have endured extensive trauma such as sexual abuse, childhood abuse, war veterans, and the homeless.

Majority of the researchers that study brain abnormalities also support the dopamine hypothesis of schizophrenia. When it was discovered that dopamine-blocking drugs helped those with schizophrenia, researchers made the assumption that the cause must be overactivity of dopamine receptors. Later, when post-mortem studies were done on schizophrenic patients, researchers found increased amounts of dopamine in their systems. What was failed to be considered was the discovery that these drugs also initiated an attempt to compensate for the blockade. In an analysis of post-mortem studies, Haracz (1982) argued, “”Since the majority of the schizophrenics in the above studies received neuroleptics shortly before death, drug effects must be considered in the interpretation of the positive findings. Drug-free schizophrenics and controls were reported to have similar DA and HVA concentrations in several brain regions””. Thus, circular reasoning is being used to explain how researchers know schizophrenia is caused by excess dopamine.

One of the more sensible theories behind schizophrenia is the diathesis-stress model of schizophrenia. This theory indicates that some people have a genetic predisposition to acquiring schizophrenia, however this genetic marker is only activated by stressful or traumatic events. The more stressful events you encounter during your lifetime, the more likely you are to exceed your stress threshold, increasing your chance of getting schizophrenia. Those that support this theory reason that people with this genetic predisposition have a harder time coping with stress-inducing events, and the symptoms of schizophrenia are simply their way of coping with it. One way this model has been studied is through the use of twin studies. Read & Dillon (2013) explain, “”If reared-together MZ (monozygotic, identical) twin pairs, who share 100% of the same genes, resemble each other more for schizophrenia than do reared-together same-sex DZ twin pairs (dizygotic, fraternal), who share on average only 50% of the same genes, the genetic position is confirmed””. While the concordance rates for MZ twins is typically higher than that of DZ twins, twins studies prove schizophrenia is not purely a genetically inherited disease, otherwise MZ concordance rates would be 100%. The diathesis-stress model attempts to combine social and biological dimensions, however too many researchers focus primarily on the later, and neglect to give much consideration towards the trigger, which is the stressful life event (Read & Dillon, 2013).

One of the main reasons people are calling for the diagnosis of schizophrenia to be abandoned is because despite how long the diagnosis has been around, reliability has yet to become established among clinicians. Copeland, Cooper, Kendell, & Gourlay (1971) performed a study while the DSM-III was in use that aimed to see if there was reliability among how US and UK clinicians diagnosed schizophrenia, and found 69% of US psychiatrists diagnosed the patient with schizophrenia as opposed to 2% of UK psychiatrists who were given the same patient description. In the DSM-V, instead of working on making criteria for the diagnosis more reliable, researchers have lowered the value of kappa that is acceptable in order to claim schizophrenia is a reliable diagnosis. With such a wide variety symptoms for the disorder, people with schizophrenia can have very drastic differences in what they are experiencing. Since researchers have struggled to pin down the causes of schizophrenia, there is not much scientific evidence to back up criteria restrictions (Bentall, Jackson, & Pilgrim, 1988), therefore psychiatrists must base their diagnoses off self-reported symptoms and subjective things they can see externally. If a measure is not reliable, it cannot be valid either. When a diagnosis is valid, it refers to knowing there is a cause, having signs and symptoms that can be explained by the cause, and there is an appropriate treatment that makes sense due to the disorder’s properties (Aboraya, France, Young, Curci, & Lepage, 2005). If psychiatrists cannot come to an agreement on what a person with schizophrenia looks or behaves like, then there is no basis to build off of.

The continued failure to identify the causes of schizophrenia and lack of reliability in the diagnosis supports the concept that the diagnosis should be abandoned, and a new category of diagnosis should replace it. If researchers start from scratch, establish a more concrete set of criteria, and expand their research on the causes of such symptoms, psychiatrists would be able to increase reliability of the diagnosis. Even just changing the name of the diagnosis will help in at least destigmatizing the disorder. In 2001, Japan changed the name of schizophrenia in an attempt to get rid of the negative connotation attached to it, and the results were surprising. “”86% of psychiatrists working in the Miyagi prefecture found the new term easier for informing patients and explaining the concept of the disorder; 82% of them found the new term better for obtaining consent to treatment and treatment adherence, more effective in reducing stigma and promising for achievement of social integration”” (Lasalvia, Penta, Sartorius, & Henderson, 2015). Japan and other countries that have followed in their footsteps have created a multidimensional approach that incorporates both the biological and environmental factors, and treat the severity of the diagnosis on a spectrum (Awenat et al., 2013). Finally, it may be concluded that although there have been people to benefit from getting diagnosed with schizophrenia, it would be more beneficial to the majority to abandon the diagnosis entirely and create a new one to replace it.

Portrayals of Schizophrenia by Media. (2020, Apr 15). Retrieved from https://papersowl.com/examples/portrayals-of-schizophrenia-by-media/

Schizophrenia in the United States