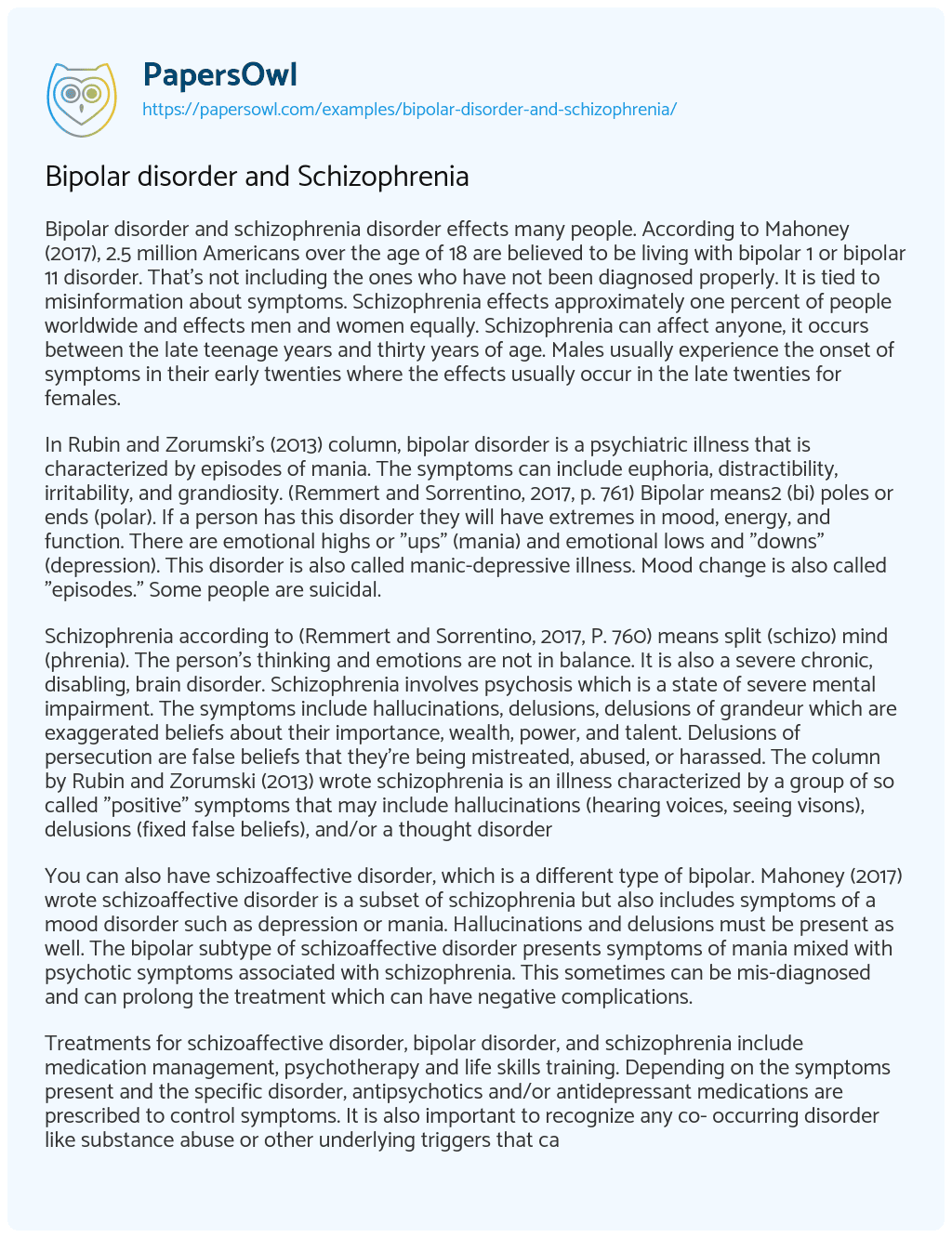 Bipolar disorder and schizophrenia disorder effects many people. According to Mahoney (2017), 2.5 million Americans over the age of 18 are believed to be living with bipolar 1 or bipolar 11 disorder. That’s not including the ones who have not been diagnosed properly. It is tied to misinformation about symptoms. Schizophrenia effects approximately one percent of people worldwide and effects men and women equally. Schizophrenia can affect anyone, it occurs between the late teenage years and thirty years of age. Males usually experience the onset of symptoms in their early twenties where the effects usually occur in the late twenties for females.

In Rubin and Zorumski’s (2013) column, bipolar disorder is a psychiatric illness that is characterized by episodes of mania. The symptoms can include euphoria, distractibility, irritability, and grandiosity. (Remmert and Sorrentino, 2017, p. 761) Bipolar means2 (bi) poles or ends (polar). If a person has this disorder they will have extremes in mood, energy, and function. There are emotional highs or “ups” (mania) and emotional lows and “downs” (depression). This disorder is also called manic-depressive illness. Mood change is also called “episodes.” Some people are suicidal.

Schizophrenia according to (Remmert and Sorrentino, 2017, P. 760) means split (schizo) mind (phrenia). The person’s thinking and emotions are not in balance. It is also a severe chronic, disabling, brain disorder. Schizophrenia involves psychosis which is a state of severe mental impairment. The symptoms include hallucinations, delusions, delusions of grandeur which are exaggerated beliefs about their importance, wealth, power, and talent. Delusions of persecution are false beliefs that they’re being mistreated, abused, or harassed. The column by Rubin and Zorumski (2013) wrote schizophrenia is an illness characterized by a group of so called “positive” symptoms that may include hallucinations (hearing voices, seeing visons), delusions (fixed false beliefs), and/or a thought disorder

Treatments for schizoaffective disorder, bipolar disorder, and schizophrenia include medication management, psychotherapy and life skills training. Depending on the symptoms present and the specific disorder, antipsychotics and/or antidepressant medications are prescribed to control symptoms. It is also important to recognize any co- occurring disorder like substance abuse or other underlying triggers that can affect these disorders. Mahoney (2017)