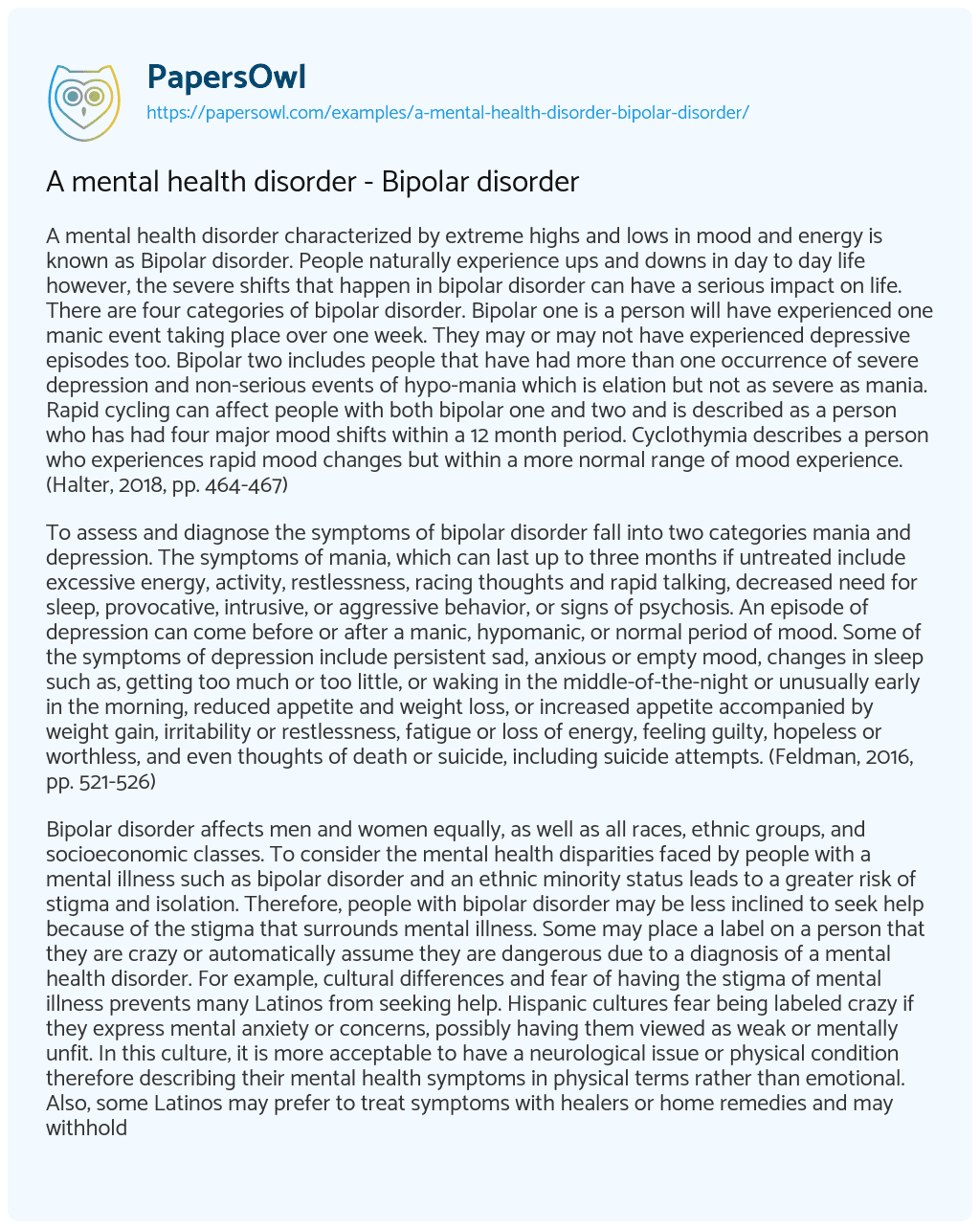 A mental health disorder characterized by extreme highs and lows in mood and energy is known as Bipolar disorder. People naturally experience ups and downs in day to day life however, the severe shifts that happen in bipolar disorder can have a serious impact on life. There are four categories of bipolar disorder. Bipolar one is a person will have experienced one manic event taking place over one week. They may or may not have experienced depressive episodes too. Bipolar two includes people that have had more than one occurrence of severe depression and non-serious events of hypo-mania which is elation but not as severe as mania. Rapid cycling can affect people with both bipolar one and two and is described as a person who has had four major mood shifts within a 12 month period. Cyclothymia describes a person who experiences rapid mood changes but within a more normal range of mood experience. (Halter, 2018, pp. 464-467)

To assess and diagnose the symptoms of bipolar disorder fall into two categories mania and depression. The symptoms of mania, which can last up to three months if untreated include excessive energy, activity, restlessness, racing thoughts and rapid talking, decreased need for sleep, provocative, intrusive, or aggressive behavior, or signs of psychosis. An episode of depression can come before or after a manic, hypomanic, or normal period of mood. Some of the symptoms of depression include persistent sad, anxious or empty mood, changes in sleep such as, getting too much or too little, or waking in the middle-of-the-night or unusually early in the morning, reduced appetite and weight loss, or increased appetite accompanied by weight gain, irritability or restlessness, fatigue or loss of energy, feeling guilty, hopeless or worthless, and even thoughts of death or suicide, including suicide attempts. (Feldman, 2016, pp. 521-526)

Bipolar disorder affects men and women equally, as well as all races, ethnic groups, and socioeconomic classes. To consider the mental health disparities faced by people with a mental illness such as bipolar disorder and an ethnic minority status leads to a greater risk of stigma and isolation. Therefore, people with bipolar disorder may be less inclined to seek help because of the stigma that surrounds mental illness. Some may place a label on a person that they are crazy or automatically assume they are dangerous due to a diagnosis of a mental health disorder. For example, cultural differences and fear of having the stigma of mental illness prevents many Latinos from seeking help. Hispanic cultures fear being labeled crazy if they express mental anxiety or concerns, possibly having them viewed as weak or mentally unfit. In this culture, it is more acceptable to have a neurological issue or physical condition therefore describing their mental health symptoms in physical terms rather than emotional. Also, some Latinos may prefer to treat symptoms with healers or home remedies and may withhold this fact from medical professionals for fear that they will be ridiculed for beliefs of their culture. (National Alliance on Mental Health, 2018)

If a person with bipolar disorder seeks care, management of this condition is possible even if there is no cure. Effective management includes a proper diagnosis of the disorder and medication such as mood stabilizers that include lithium, valproic acid and carbamazepine. A comprehensive management program, including collaboration between the patient’s family physician and psychiatrist, should be implemented to optimize medical care and successful management of bipolar disorder. (Halter, 2018, p. 469)

Nursing interventions for a bipolar patient during inpatient setting usually include observing the client every fifteen minutes if they are suicidal, assisting the client in evaluating the positive and negative aspects of their life, encouraging the appropriate expression of angry feelings, scheduling regular periods of time throughout the day for recreational or occupational therapy, encouraging client to groom self, and ensuring the client’s participation in taking mood stabilizing medications. It is essential for them to engage in interpersonal therapies, cognitive-behavioral therapy, group therapy, and journal episodes to allow for self-reflection, personal growth, and support. (Halter, 2018, pp. 468-469)

To conclude, bipolar disorder in any state of the condition is manageable with the proper interventions deemed necessary by a medical professional. It is vital that people with this condition receive the help and support they need to manage this disorder. As there is no cure for bipolar management of the disorder can require life time interventions. On a brighter note, people that have bipolar disorder can have successful relationships and meaningful jobs with the combination of medication, therapy, healthy lifestyle, and support. There is hope for individuals with bipolar disorder, they just need to reach out for the proper help and support without the fear of the stigma surrounding mental health disorders involve. Contrary to most of society’s beliefs, these interventions can help people with a diagnosis of a mental illness like bipolar disorder to lead productive and fulfilling lives.

A mental health disorder - Bipolar disorder. (2019, May 03). Retrieved from https://papersowl.com/examples/a-mental-health-disorder-bipolar-disorder/