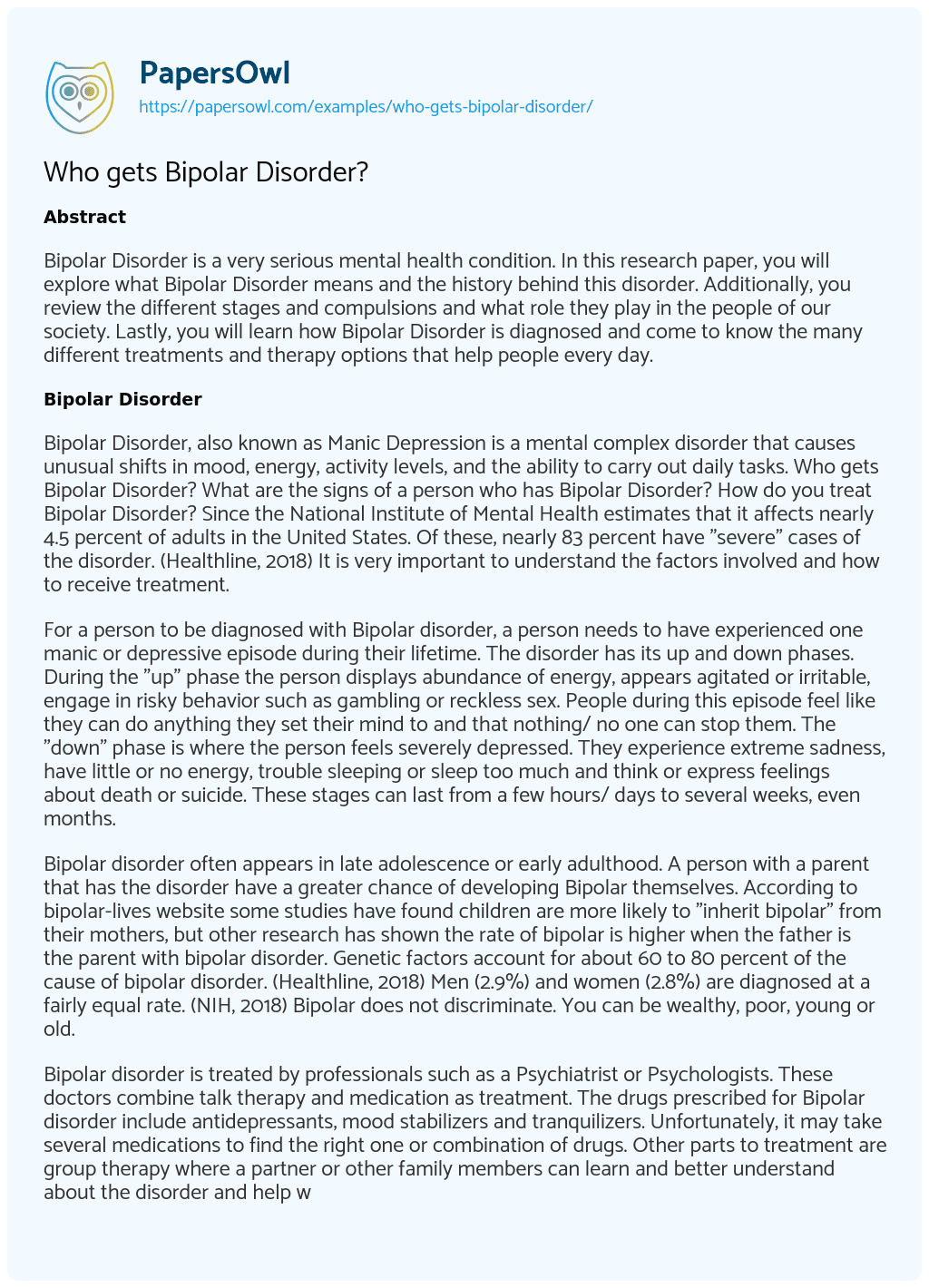 Bipolar Disorder is a very serious mental health condition. In this research paper, you will explore what Bipolar Disorder means and the history behind this disorder. Additionally, you review the different stages and compulsions and what role they play in the people of our society. Lastly, you will learn how Bipolar Disorder is diagnosed and come to know the many different treatments and therapy options that help people every day.

Bipolar Disorder, also known as Manic Depression is a mental complex disorder that causes unusual shifts in mood, energy, activity levels, and the ability to carry out daily tasks. Who gets Bipolar Disorder? What are the signs of a person who has Bipolar Disorder? How do you treat Bipolar Disorder? Since the National Institute of Mental Health estimates that it affects nearly 4.5 percent of adults in the United States. Of these, nearly 83 percent have “severe” cases of the disorder. (Healthline, 2018) It is very important to understand the factors involved and how to receive treatment.

For a person to be diagnosed with Bipolar disorder, a person needs to have experienced one manic or depressive episode during their lifetime. The disorder has its up and down phases. During the “up” phase the person displays abundance of energy, appears agitated or irritable, engage in risky behavior such as gambling or reckless sex. People during this episode feel like they can do anything they set their mind to and that nothing/ no one can stop them. The “down” phase is where the person feels severely depressed. They experience extreme sadness, have little or no energy, trouble sleeping or sleep too much and think or express feelings about death or suicide. These stages can last from a few hours/ days to several weeks, even months.

Bipolar disorder often appears in late adolescence or early adulthood. A person with a parent that has the disorder have a greater chance of developing Bipolar themselves. According to bipolar-lives website some studies have found children are more likely to “inherit bipolar” from their mothers, but other research has shown the rate of bipolar is higher when the father is the parent with bipolar disorder. Genetic factors account for about 60 to 80 percent of the cause of bipolar disorder. (Healthline, 2018) Men (2.9%) and women (2.8%) are diagnosed at a fairly equal rate. (NIH, 2018) Bipolar does not discriminate. You can be wealthy, poor, young or old.

Bipolar disorder is treated by professionals such as a Psychiatrist or Psychologists. These doctors combine talk therapy and medication as treatment. The drugs prescribed for Bipolar disorder include antidepressants, mood stabilizers and tranquilizers. Unfortunately, it may take several medications to find the right one or combination of drugs. Other parts to treatment are group therapy where a partner or other family members can learn and better understand about the disorder and help when the person is in the stages of the disorder.

The understanding of Bipolar disorder has evolved throughout centuries. There have been more advances in education and treatment. Today, medication and therapy help many with bipolar disorder manage their symptoms and cope with their condition. Research is still ongoing to better understand this condition. The more we learn about this disorder, the more people can receive the care they need.

Who gets Bipolar Disorder?. (2019, Apr 15). Retrieved from https://papersowl.com/examples/who-gets-bipolar-disorder/