Bipolar Disorder and its Treatment 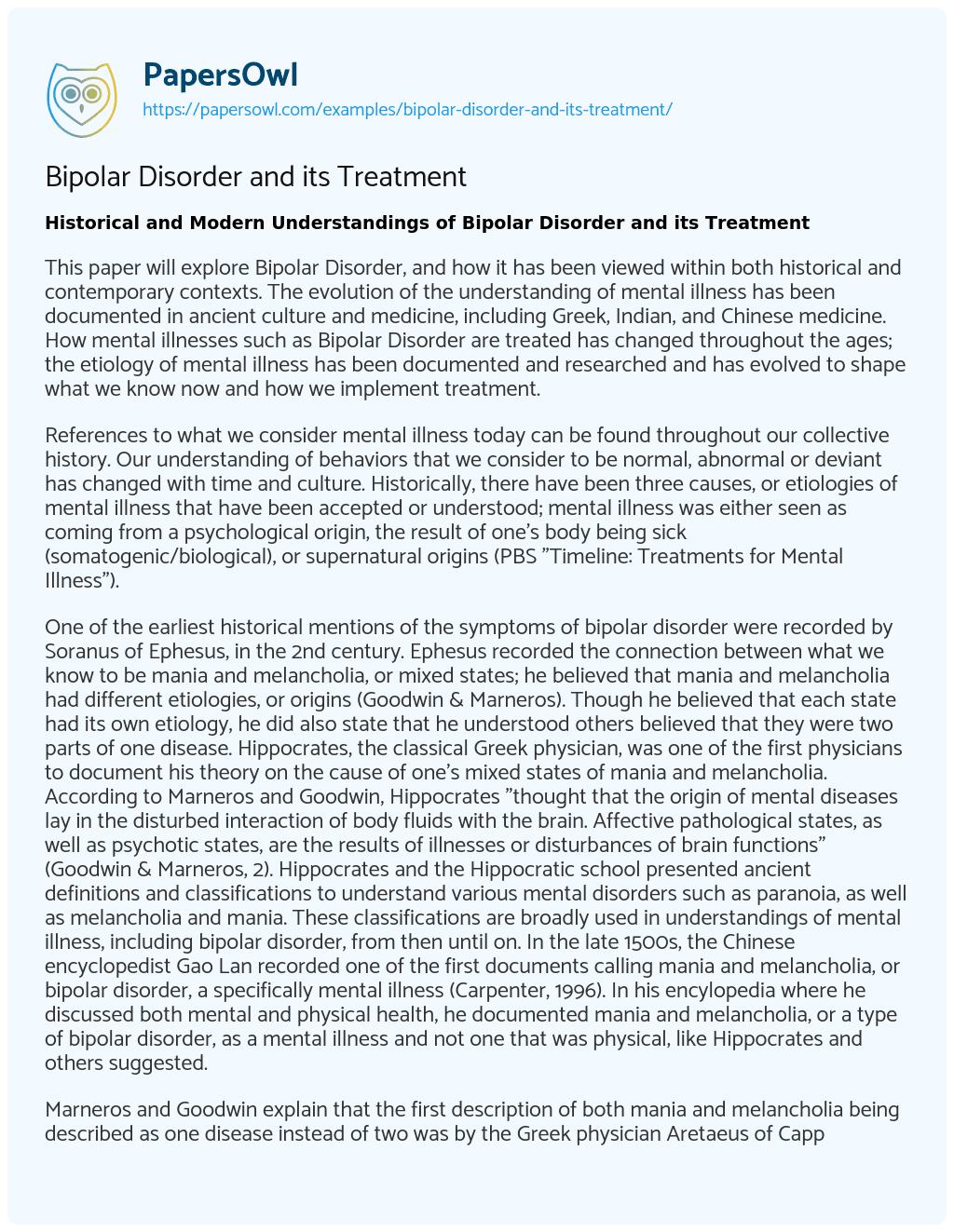 Historical and Modern Understandings of Bipolar Disorder and its Treatment

This paper will explore Bipolar Disorder, and how it has been viewed within both historical and contemporary contexts. The evolution of the understanding of mental illness has been documented in ancient culture and medicine, including Greek, Indian, and Chinese medicine. How mental illnesses such as Bipolar Disorder are treated has changed throughout the ages; the etiology of mental illness has been documented and researched and has evolved to shape what we know now and how we implement treatment.

References to what we consider mental illness today can be found throughout our collective history. Our understanding of behaviors that we consider to be normal, abnormal or deviant has changed with time and culture. Historically, there have been three causes, or etiologies of mental illness that have been accepted or understood; mental illness was either seen as coming from a psychological origin, the result of one’s body being sick (somatogenic/biological), or supernatural origins (PBS “Timeline: Treatments for Mental Illness”).

One of the earliest historical mentions of the symptoms of bipolar disorder were recorded by Soranus of Ephesus, in the 2nd century. Ephesus recorded the connection between what we know to be mania and melancholia, or mixed states; he believed that mania and melancholia had different etiologies, or origins (Goodwin & Marneros). Though he believed that each state had its own etiology, he did also state that he understood others believed that they were two parts of one disease. Hippocrates, the classical Greek physician, was one of the first physicians to document his theory on the cause of one’s mixed states of mania and melancholia. According to Marneros and Goodwin, Hippocrates “thought that the origin of mental diseases lay in the disturbed interaction of body fluids with the brain. Affective pathological states, as well as psychotic states, are the results of illnesses or disturbances of brain functions” (Goodwin & Marneros, 2). Hippocrates and the Hippocratic school presented ancient definitions and classifications to understand various mental disorders such as paranoia, as well as melancholia and mania. These classifications are broadly used in understandings of mental illness, including bipolar disorder, from then until on. In the late 1500s, the Chinese encyclopedist Gao Lan recorded one of the first documents calling mania and melancholia, or bipolar disorder, a specifically mental illness (Carpenter, 1996). In his encylopedia where he discussed both mental and physical health, he documented mania and melancholia, or a type of bipolar disorder, as a mental illness and not one that was physical, like Hippocrates and others suggested.

Marneros and Goodwin explain that the first description of both mania and melancholia being described as one disease instead of two was by the Greek physician Aretaeus of Cappadocia (Marneros & Goodwin, 6). Aretaeus of Cappadocia described mania and melancholia as one disease that has a combination of symptoms. “His descriptions of the boundless developments of melancholia into mania led to the thinking that there is not only a ”switch” but also a ”mixture” of symptoms. In his books: On the Aetiology and Symptomatology of Chronic Diseases and The Treatment of Chronic Diseases, he wrote: ????”I think that melancholia is the beginning and a part of mania” and ”The development of mania is really a worsening of the disease [melancholia], rather than a change into another disease. In most of them [melancholics], the sadness became better after various lengths of time and changed into happiness; the patients then develop a mania” (Marneros & Goodwin, 6).

In the 17th Century, we began to see the more modern classification of Bipolar Disorder that we understand today. Richard Napier introduced the idea of cycling mood patterns within one person, though did not use the terms manic depression or bipolar disorder ( Nemade & Dombeck). It wasn’t until the 19th century that we began to see the term manic depression used. The ‘Treatise on Insanity’ by Phillipe Pinel in 1806 and ‘Observations on Madness and Melancholy’ By John Haslam in 1809 “reintroduced the concept of bipolar disease into Western medicine” (Nemade & Dombeck). In the late 19th and early 20th centuries Emil Kraepelin recorded and documented the natural cycles mania and depression of patients he had identified as having bipolar disorder. One of Kraepelin’s important notes was that each period of mania and depression were followed by a period of time where the patient did not show any symptoms. It was during these studies that the term “manic-depressive psychosis” was coined by Kraepelin (Nemade & Dombeck).

How bipolar disorder is treated has changed over time, just as our understandings of this mental illness have changed. According to Shorter in The History of Lithium Therapy, lithium was investigated as being a treatment for mania and melancholia/depression in the 19th century however was soon forgotten. Shorter explains that lithium had been used medicinally for hundreds of years. Doctors utilized springs whose water contained lithium as treatments for gout, “brain gout”, and other common ailments at the time. In 1870, Silas Weir Mitchell spoke on the use of lithium as a hypnotic and anti-convulsant, and later said that lithium could also be used to treat “general nervousness” (Shorter, 2). After Weir, William Hammond was the first physician to prescribe lithium for mania: “Latterly I have used the bromide of lithium in cases of acute mania, and have more reason to be satisfied with it than with any other medicine calculated to diminish the amount of blood in the cerebral vessels, and to calm any nervous excitement that may be present” (Shorter, 2). In 1894, Danish psychiatrist Frederik Lange began using lithium to treat 35 patients diagnosed as having manic depression with lithium carbonate. Lithium was used for a short period of time as treatment for manic depression, however the research was again forgotten and lithium was not used for the first half of the 20th century (Shorter, 2).

It was in 1949 that John Cade is credited with reintroducing lithium as a potential treatment for bipolar disorder (Shorter, 1). Cade began treating his manic patients with lithium at the Bundoora Repatriation Hospital in Melbourne, Australia. Shorter states that “Cade’s discovery was significant not just because it added an important new agent to the psychopharmacologic armamentarium but because it illustrated the triumph of the scientific method, at a time when psychiatry was in danger of losing sight of science” (Shorter, 3). Unfortunately, Cade’s discoveries regarding lithium as a treatment for bipolar disorder were not well received in 1949. In that same year, accounts of lithium poisoning in patients who were administered high doses of lithium for congestive heart failure were published, and there was general distrust of lithium in medicine (Shorter, 3). When asked about why lithium was not immediately utilized by psychiatrists for treatment of bipolar disorder, Cade explained that his discovery “made by a [then] unknown psychiatrist with no research training, working in a small chronic hospital with primitive techniques and negligible equipment, was not likely to command attention” (Baltimore, FJ). Despite the lack of acknowledgement for this research, Cade’s studies did not go completely unnoticed and smaller studies of lithium as treatment for bipolar disorder began in Australia, France and Denmark. It was during these studies that researchers began to understand that lithium treatment requires close monitoring, regular blood work and maintenance to be effective medicine (Shorter, 3).

Bipolar Disorder and its Treatment. (2019, Mar 18). Retrieved from https://papersowl.com/examples/bipolar-disorder-and-its-treatment/

Symptoms and Treatment of Bipolar Disorder

About Treatment of Bipolar Disorder