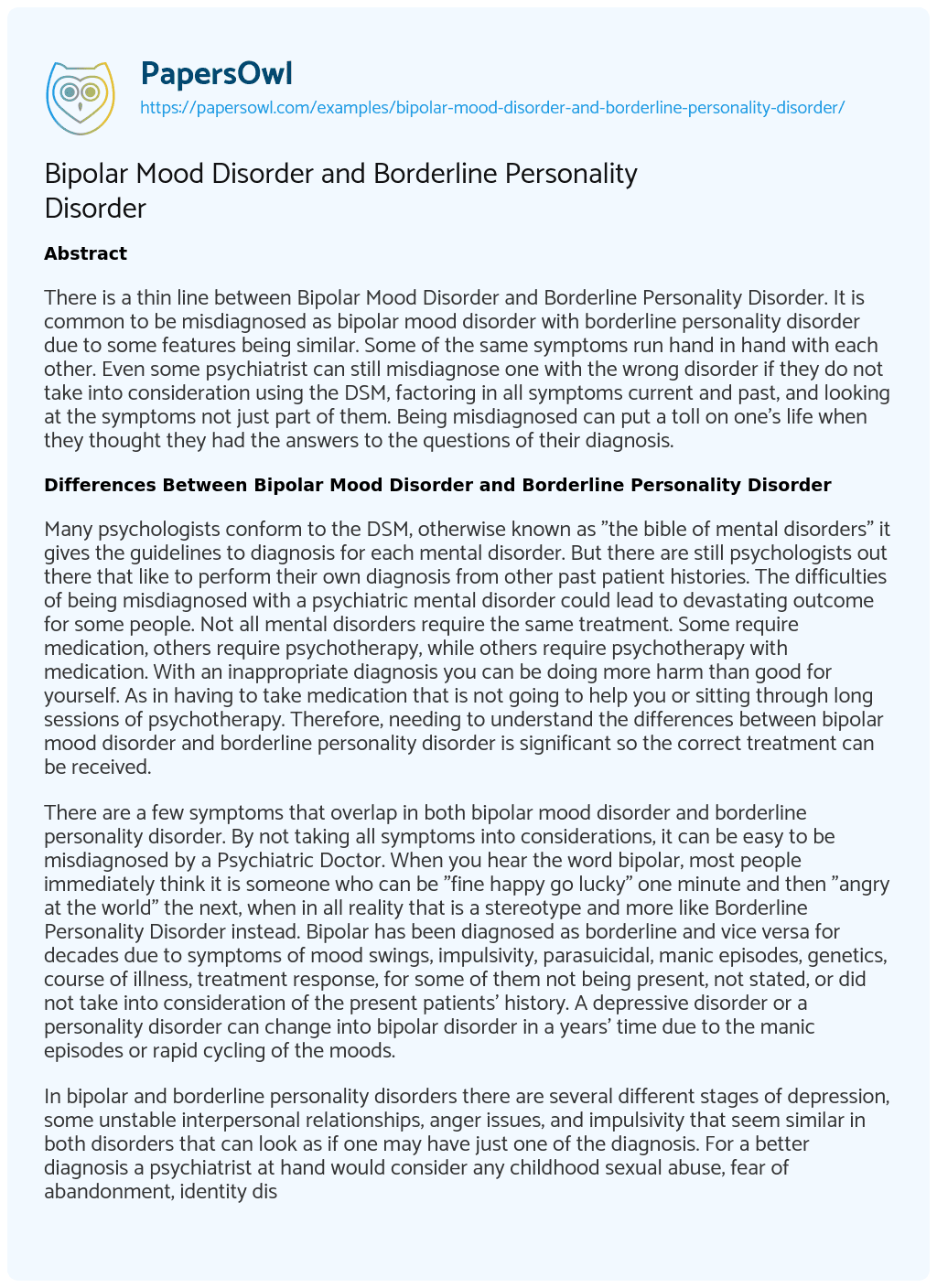 There is a thin line between Bipolar Mood Disorder and Borderline Personality Disorder. It is common to be misdiagnosed as bipolar mood disorder with borderline personality disorder due to some features being similar. Some of the same symptoms run hand in hand with each other. Even some psychiatrist can still misdiagnose one with the wrong disorder if they do not take into consideration using the DSM, factoring in all symptoms current and past, and looking at the symptoms not just part of them. Being misdiagnosed can put a toll on one’s life when they thought they had the answers to the questions of their diagnosis.

Many psychologists conform to the DSM, otherwise known as “the bible of mental disorders” it gives the guidelines to diagnosis for each mental disorder. But there are still psychologists out there that like to perform their own diagnosis from other past patient histories. The difficulties of being misdiagnosed with a psychiatric mental disorder could lead to devastating outcome for some people. Not all mental disorders require the same treatment. Some require medication, others require psychotherapy, while others require psychotherapy with medication. With an inappropriate diagnosis you can be doing more harm than good for yourself. As in having to take medication that is not going to help you or sitting through long sessions of psychotherapy. Therefore, needing to understand the differences between bipolar mood disorder and borderline personality disorder is significant so the correct treatment can be received.

There are a few symptoms that overlap in both bipolar mood disorder and borderline personality disorder. By not taking all symptoms into considerations, it can be easy to be misdiagnosed by a Psychiatric Doctor. When you hear the word bipolar, most people immediately think it is someone who can be “fine happy go lucky” one minute and then “angry at the world” the next, when in all reality that is a stereotype and more like Borderline Personality Disorder instead. Bipolar has been diagnosed as borderline and vice versa for decades due to symptoms of mood swings, impulsivity, parasuicidal, manic episodes, genetics, course of illness, treatment response, for some of them not being present, not stated, or did not take into consideration of the present patients’ history. A depressive disorder or a personality disorder can change into bipolar disorder in a years’ time due to the manic episodes or rapid cycling of the moods.

In bipolar and borderline personality disorders there are several different stages of depression, some unstable interpersonal relationships, anger issues, and impulsivity that seem similar in both disorders that can look as if one may have just one of the diagnosis. For a better diagnosis a psychiatrist at hand would consider any childhood sexual abuse, fear of abandonment, identity disturbances, recurrent suicidal thoughts, self-mutilating behavior, or dissociative symptoms (all symptoms in borderline personality but not in bipolar) when considering a diagnosis.

In bipolar, a patient will have stable moods between depressed and manic episodes that can last months or even years. When having a manic episode people diagnosed with being bipolar feel like they are on top of the world, they can go days on very little or no sleep, engage in behaviors like spending sprees or risky sexual behaviors. It is proven that bipolar is genetic with 80% heritability rate, like genetics of height, that’s twice as high to borderline. When being diagnosed as being bipolar it is likely that you will be give mood stabilizers and partake in psychotherapies but is not a cure. It is unlikely to have suicidal behavioral episodes. Less than 30% of bipolar patients claims to have experienced childhood sexual abuse.

People who have been diagnosed with borderline personality disorder do not show any signs of stability in any given time frame, it goes from a day to day basis depending on environmental factors. It is considered a personality disorder when it is constant, not episodic like bipolar, and can be curable with psychotherapy and medications. It is highly likely to have suicidal or self-mutilating behavior with borderline. Fear of abandonment, dissociative symptoms (disconnected from emotions and behavior), chronic emptiness (not just episodes), identity disturbance, and self-mutilating experiences are far more favorable in borderline personality disorder than bipolar. Over one half of the patients with borderline disorder have reported having experienced sexual trauma of some kind as a child.

There are several differences in bipolar mood disorder and borderline personality disorder. The psychologist will have to dig a little deeper into one’s past to come up with a correct diagnosis. Take more time with a patient rather than rushing into a diagnosis that is not correct or basing one patient off another one. It will take more than a ten-minute session with a psychologist that one has never seen before to change a diagnosis someone has had for ten-years from bipolar mood disorder to borderline personality disorder. Unfortunately, there are some patients that will be put on medications that do not associate with the symptoms in hand. Due to being misdiagnosed it can cause patients to have to go through the sessions of being undiagnosed from a diagnosis they have already come to terms with and they thought they had answers.

About Treatment of Bipolar Disorder