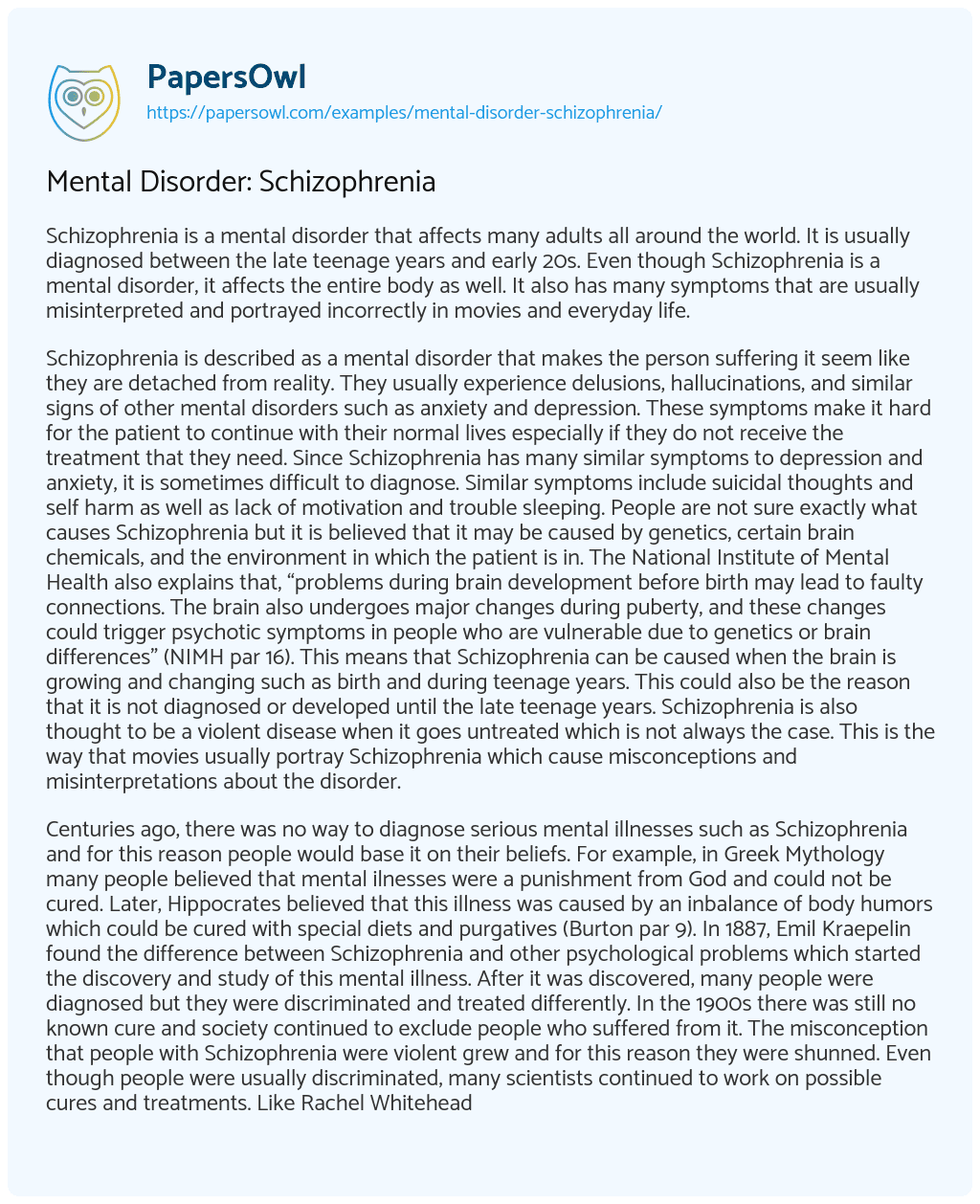 Schizophrenia is described as a mental disorder that makes the person suffering it seem like they are detached from reality. They usually experience delusions, hallucinations, and similar signs of other mental disorders such as anxiety and depression. These symptoms make it hard for the patient to continue with their normal lives especially if they do not receive the treatment that they need. Since Schizophrenia has many similar symptoms to depression and anxiety, it is sometimes difficult to diagnose. Similar symptoms include suicidal thoughts and self harm as well as lack of motivation and trouble sleeping. People are not sure exactly what causes Schizophrenia but it is believed that it may be caused by genetics, certain brain chemicals, and the environment in which the patient is in. The National Institute of Mental Health also explains that, “problems during brain development before birth may lead to faulty connections. The brain also undergoes major changes during puberty, and these changes could trigger psychotic symptoms in people who are vulnerable due to genetics or brain differences” (NIMH par 16). This means that Schizophrenia can be caused when the brain is growing and changing such as birth and during teenage years. This could also be the reason that it is not diagnosed or developed until the late teenage years. Schizophrenia is also thought to be a violent disease when it goes untreated which is not always the case. This is the way that movies usually portray Schizophrenia which cause misconceptions and misinterpretations about the disorder.

Centuries ago, there was no way to diagnose serious mental illnesses such as Schizophrenia and for this reason people would base it on their beliefs. For example, in Greek Mythology many people believed that mental ilnesses were a punishment from God and could not be cured. Later, Hippocrates believed that this illness was caused by an inbalance of body humors which could be cured with special diets and purgatives (Burton par 9). In 1887, Emil Kraepelin found the difference between Schizophrenia and other psychological problems which started the discovery and study of this mental illness. After it was discovered, many people were diagnosed but they were discriminated and treated differently. In the 1900s there was still no known cure and society continued to exclude people who suffered from it. The misconception that people with Schizophrenia were violent grew and for this reason they were shunned. Even though people were usually discriminated, many scientists continued to work on possible cures and treatments. Like Rachel Whitehead explains in “Schizophrenia: 100 Years of Bad Treatment”, “While huge advances in treatment have been made since the early 1900s when “”cures”” included raising patients’ body temperature by injecting them with sulphur and oil, things haven’t progressed anywhere near as fast as they have for physical illnesses such as cancer and heart disease” (Whitehead par 8). This shows that scientists worked hard on finding a cure but were not successful and continue to have trouble today. She also talks about the technique that was used to test out different “cures” which was mostly by trial and error. This type of technique is still used today to try and find the perfect medication for each patient. This technique consists of giving the patient different medications and monitoring them to find out which works the best.

The cause of Schizophrenia is still a mystery to doctors and scientists to this day. They are not sure what exactly what causes it but it is believed that it is based on genetic and different brain chemicals as well as the environment in which the patient is in. Another possible cause could also be childhood trauma or other traumatic events in the patients’ lives.

Schizophrenia: Mental Illness that Controls how a Person Thinks, Behaves and Feels