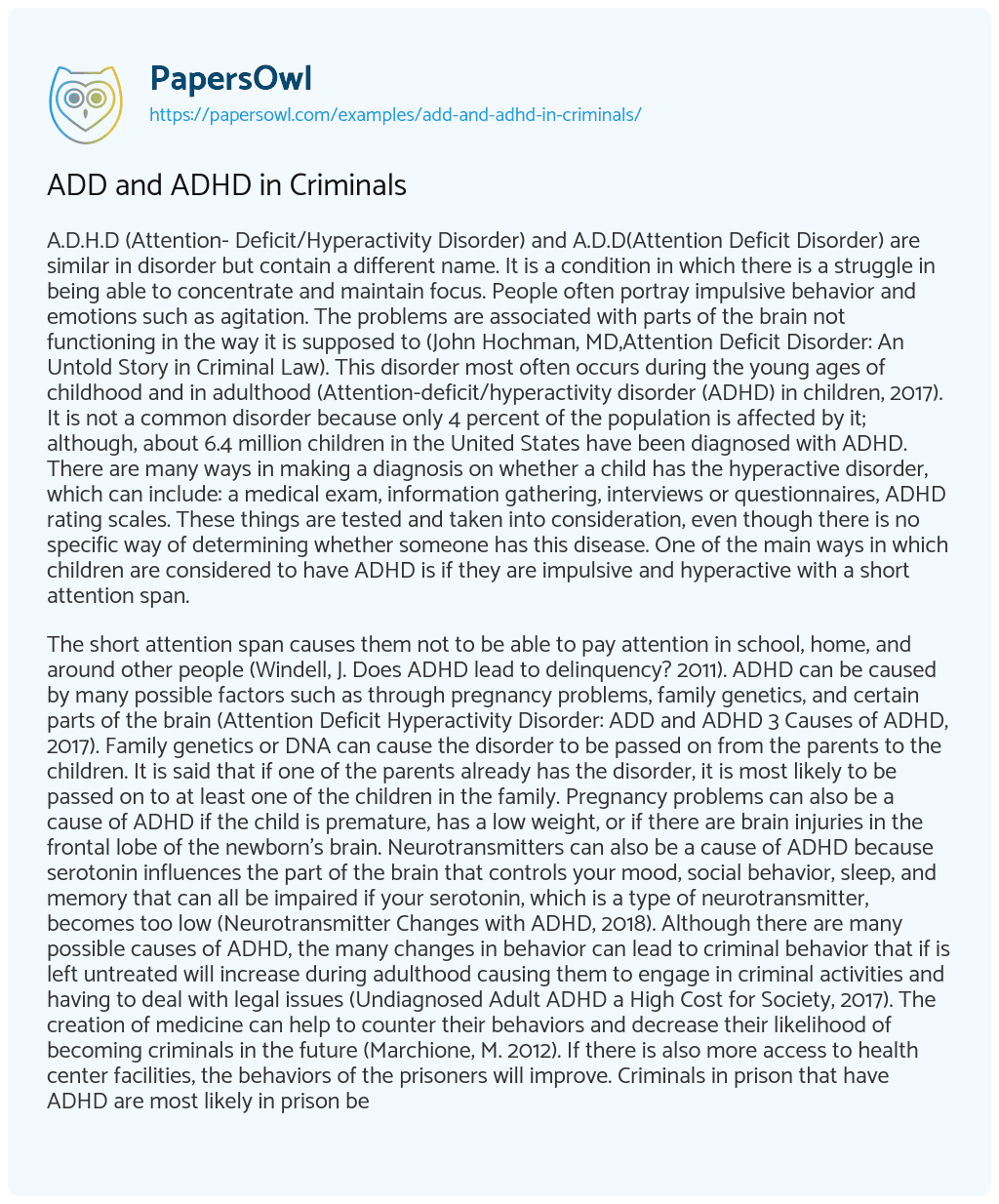 A.D.H.D (Attention- Deficit/Hyperactivity Disorder) and A.D.D(Attention Deficit Disorder) are similar in disorder but contain a different name. It is a condition in which there is a struggle in being able to concentrate and maintain focus. People often portray impulsive behavior and emotions such as agitation. The problems are associated with parts of the brain not functioning in the way it is supposed to (John Hochman, MD,Attention Deficit Disorder: An Untold Story in Criminal Law). This disorder most often occurs during the young ages of childhood and in adulthood (Attention-deficit/hyperactivity disorder (ADHD) in children, 2017). It is not a common disorder because only 4 percent of the population is affected by it; although, about 6.4 million children in the United States have been diagnosed with ADHD. There are many ways in making a diagnosis on whether a child has the hyperactive disorder, which can include: a medical exam, information gathering, interviews or questionnaires, ADHD rating scales. These things are tested and taken into consideration, even though there is no specific way of determining whether someone has this disease. One of the main ways in which children are considered to have ADHD is if they are impulsive and hyperactive with a short attention span.

The short attention span causes them not to be able to pay attention in school, home, and around other people (Windell, J. Does ADHD lead to delinquency? 2011). ADHD can be caused by many possible factors such as through pregnancy problems, family genetics, and certain parts of the brain (Attention Deficit Hyperactivity Disorder: ADD and ADHD 3 Causes of ADHD, 2017). Family genetics or DNA can cause the disorder to be passed on from the parents to the children. It is said that if one of the parents already has the disorder, it is most likely to be passed on to at least one of the children in the family. Pregnancy problems can also be a cause of ADHD if the child is premature, has a low weight, or if there are brain injuries in the frontal lobe of the newborn’s brain. Neurotransmitters can also be a cause of ADHD because serotonin influences the part of the brain that controls your mood, social behavior, sleep, and memory that can all be impaired if your serotonin, which is a type of neurotransmitter, becomes too low (Neurotransmitter Changes with ADHD, 2018). Although there are many possible causes of ADHD, the many changes in behavior can lead to criminal behavior that if is left untreated will increase during adulthood causing them to engage in criminal activities and having to deal with legal issues (Undiagnosed Adult ADHD a High Cost for Society, 2017). The creation of medicine can help to counter their behaviors and decrease their likelihood of becoming criminals in the future (Marchione, M. 2012). If there is also more access to health center facilities, the behaviors of the prisoners will improve. Criminals in prison that have ADHD are most likely in prison because they were not treated with their disorder properly. In prison, people with ADHD can have problems understanding and interpreting things. They can also have trouble managing time, which can lead to them missing court dates. Because of their problems with paying attention, they could appear ADD and ADHD 4 as if they are indifferent around legal counsel or in court, which can lead to incarceration or more time in prison. It is all unintentional, but it is seen differently by people who do not understanding the disorder. Some people believe that the criminals are purposely misbehaving, but it is just the normal behavior that they are used to displaying.

To end this repeating cycle, an organization called the Attention Deficit Disorder Association was created. This association dealt with trying to help and maintain the specific needs of inmates that had the disorder, it helped to improve their behavior as well as reduce the problems that occurred. It worked so well that people wanted the program to be well known so it could be used across the nation. I believe that ADHD/ADD is a terrible disorder that should influence people to help come up with different ways of treating it. There may not be an absolute cure, but there should be a way to be able to reduce the effects of it as well as improve the behaviors of the people that are diagnosed with this disorder more extensively than what it does now. It can help to prevent people from becoming future criminals if they are also diagnosed sooner. There should be an absolute way of determining and diagnosing a person with ADHD, something that is more effective. Although there are ways of treating ADDD/ADHD it should be properly and extensively treated so society does not have any potential criminals that could have been prevented.

ADD and ADHD in Criminals. (2020, May 01). Retrieved from https://papersowl.com/examples/add-and-adhd-in-criminals/