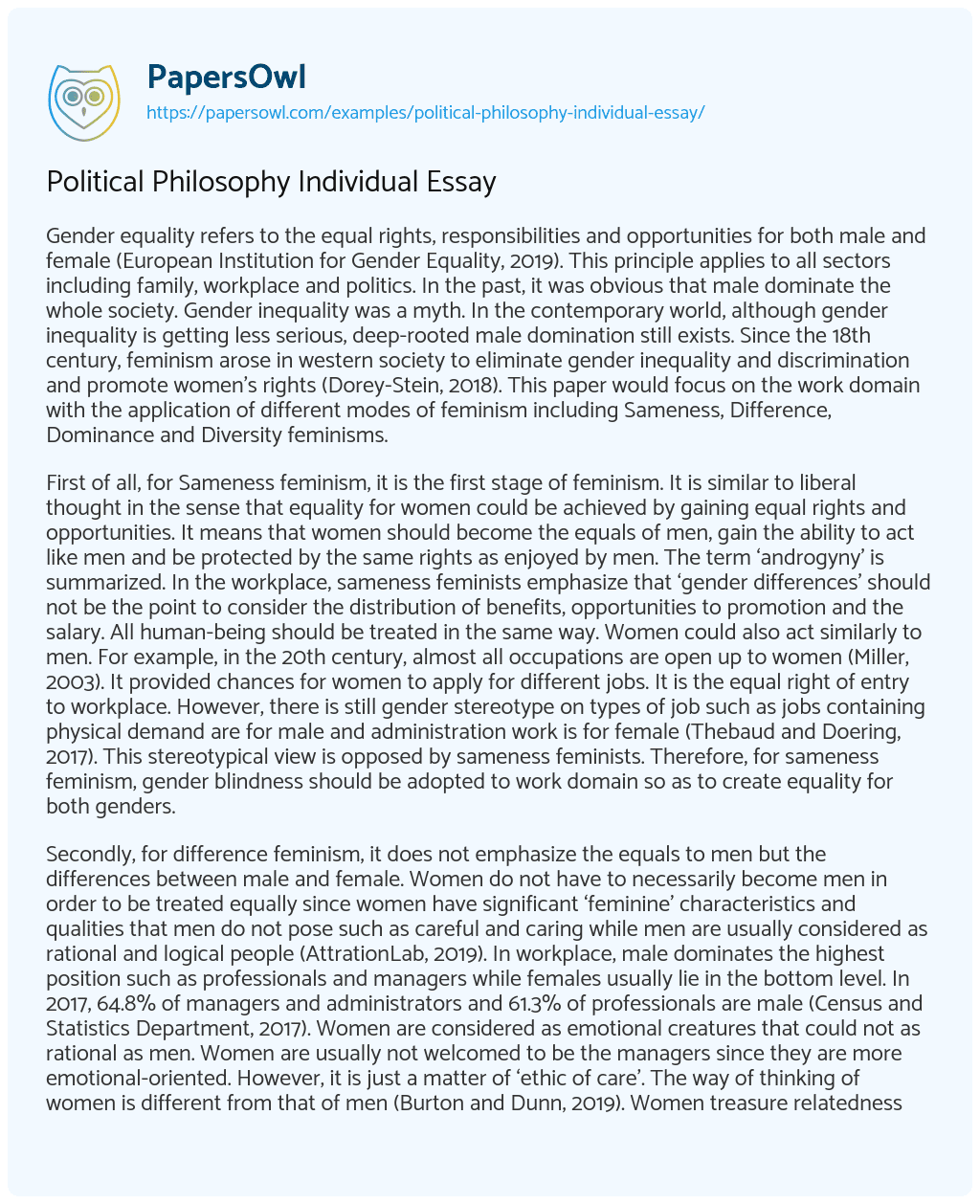 Gender equality refers to the equal rights, responsibilities and opportunities for both male and female (European Institution for Gender Equality, 2019). This principle applies to all sectors including family, workplace and politics. In the past, it was obvious that male dominate the whole society. Gender inequality was a myth. In the contemporary world, although gender inequality is getting less serious, deep-rooted male domination still exists. Since the 18th century, feminism arose in western society to eliminate gender inequality and discrimination and promote women’s rights (Dorey-Stein, 2018). This paper would focus on the work domain with the application of different modes of feminism including Sameness, Difference, Dominance and Diversity feminisms.

First of all, for Sameness feminism, it is the first stage of feminism. It is similar to liberal thought in the sense that equality for women could be achieved by gaining equal rights and opportunities. It means that women should become the equals of men, gain the ability to act like men and be protected by the same rights as enjoyed by men. The term ‘androgyny’ is summarized. In the workplace, sameness feminists emphasize that ‘gender differences’ should not be the point to consider the distribution of benefits, opportunities to promotion and the salary. All human-being should be treated in the same way. Women could also act similarly to men. For example, in the 20th century, almost all occupations are open up to women (Miller, 2003). It provided chances for women to apply for different jobs. It is the equal right of entry to workplace. However, there is still gender stereotype on types of job such as jobs containing physical demand are for male and administration work is for female (Thebaud and Doering, 2017). This stereotypical view is opposed by sameness feminists. Therefore, for sameness feminism, gender blindness should be adopted to work domain so as to create equality for both genders.

Secondly, for difference feminism, it does not emphasize the equals to men but the differences between male and female. Women do not have to necessarily become men in order to be treated equally since women have significant ‘feminine’ characteristics and qualities that men do not pose such as careful and caring while men are usually considered as rational and logical people (AttrationLab, 2019). In workplace, male dominates the highest position such as professionals and managers while females usually lie in the bottom level. In 2017, 64.8% of managers and administrators and 61.3% of professionals are male (Census and Statistics Department, 2017). Women are considered as emotional creatures that could not as rational as men. Women are usually not welcomed to be the managers since they are more emotional-oriented. However, it is just a matter of ‘ethic of care’. The way of thinking of women is different from that of men (Burton and Dunn, 2019). Women treasure relatedness more. Women would think more about relationships among people and moral concern on various issues. Difference feminists point out that these characters are good individualities that if women become men, they lose the opportunities of developing them. Therefore, these feminine characteristics are also important in the workplace. Both masculine and feminine traits should be respected.

Thirdly, for dominance feminism, also known as radical feminism, it focuses on dominate relationship in the social institutions. Patriarchy is the nature in society. Until now, male always gains power and domination over women. Dominance feminists focus on condemning patriarchy, shaping women’s desirable gender role, developing and promoting women’s own culture (Lewis, 2018). It is necessary for women to break away from men. Put dominance feminism into workplace, there is no ways for women not oppressed by men though there are increasing rights for females on salary, benefits and opportunities. Everyone could engage in the discussion. However, there is still implicit discrimination that is offensive term for females such as ‘shop-lady’ and ‘lady-secretary’ (Peters, 2017). The job titles are discriminating females. Moreover, male always is considered as independent and responsible but females are acting as assistant only (Thebaud and Doering, 2017). Dominance feminists advocate gender segregation. In the male dominated society, it is impossible that females could escape from being oppressed by men. Separating male and female is the possible way for women to develop their own spaces and nurture their real ability. Women could focus on their qualities but not on competition with men. Though there is no practical example, single-sex school could be one of the similar practices.

In addition, for diversity feminism, it concerns about the issue of diversity. To diversity feminists, there is no single type of ‘women’ for female coming from different background. The gender roles, gender stereotypical views on women and personal traits are not suitable for measuring ‘women’ from diverse classes, ages and races. The characters developed by women depends on the experiences of different stages. A survey conducted by Frank Flynn (2002) in Columbia Business School. He sent out two same workplace story to two different groups of students. One story was in male name and the another was in female name. The result turned out was diverse. Students were mostly willing to work with the male but not the female since they thought that the female was selfish and aggressive. Yet, the gender ratio of police is getting balanced. More females join the disciplined services. It differs from the stereotypical view on job type. It indicates the fact that gender should not be the only consideration in work-related issues. Gender is only indicating whether the one is male or female. It is not the indicator for dividing human beings into different jobs, distributing different workload, demand and benefits. All women have diverse personalities and ability for particular jobs and work since they grow up and be nurtured in different background and culture. The gender views are only shaped by society. More importantly, the issue of diversity should be taken into consideration. People in diverse background would act in completely different ways.

In conclusion, Sameness, difference, dominance and diversity feminisms are used in this essay to discover the gender inequality and discrimination in the work-related issue in the society. It is insightful that distinctive views and advocacies could be found in this issue.

Essay about Logic of Misogyny (Part 1)