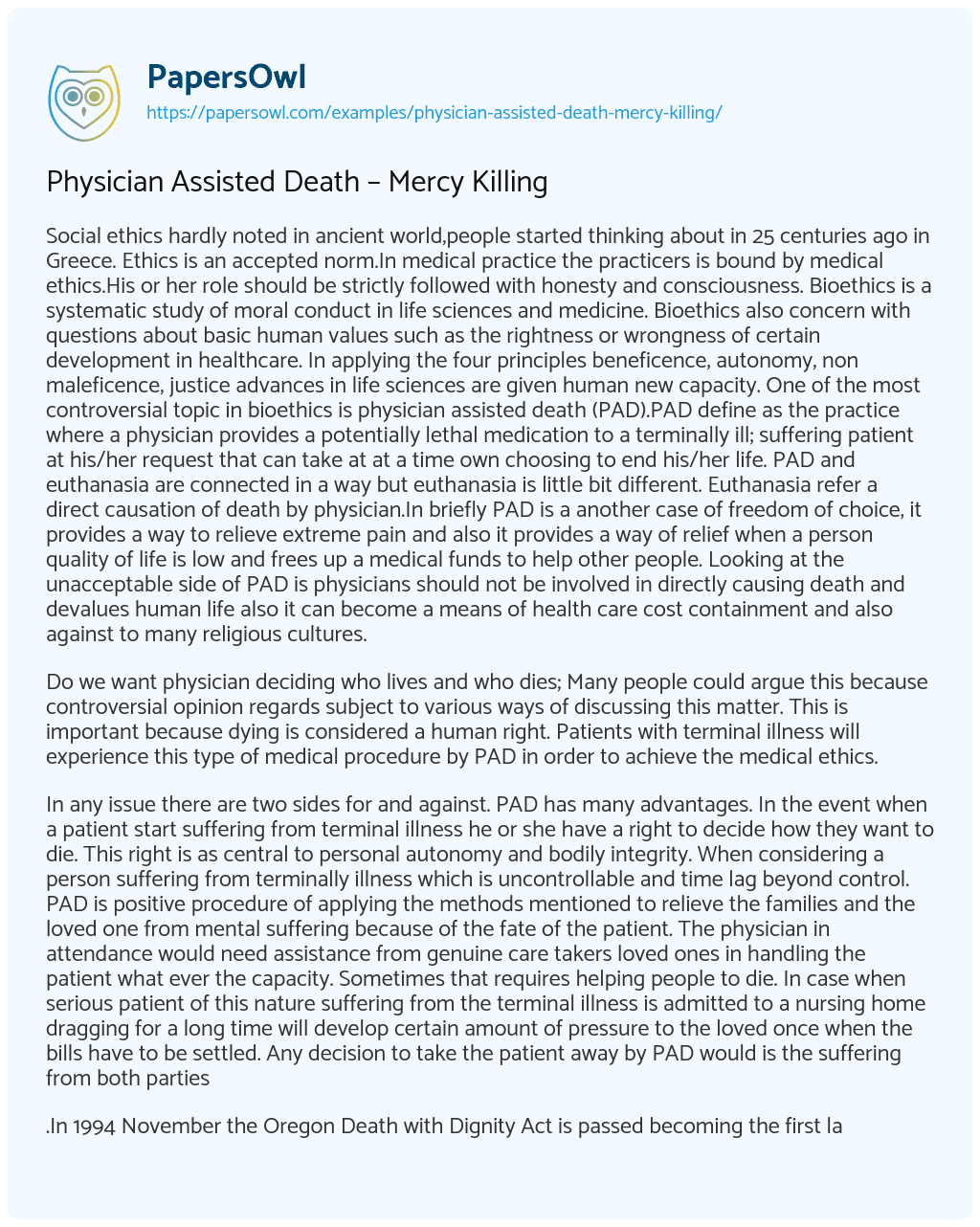 Social ethics hardly noted in ancient world,people started thinking about in 25 centuries ago in Greece. Ethics is an accepted norm.In medical practice the practicers is bound by medical ethics.His or her role should be strictly followed with honesty and consciousness. Bioethics is a systematic study of moral conduct in life sciences and medicine. Bioethics also concern with questions about basic human values such as the rightness or wrongness of certain development in healthcare. In applying the four principles beneficence, autonomy, non maleficence, justice advances in life sciences are given human new capacity. One of the most controversial topic in bioethics is physician assisted death (PAD).PAD define as the practice where a physician provides a potentially lethal medication to a terminally ill; suffering patient at his/her request that can take at at a time own choosing to end his/her life. PAD and euthanasia are connected in a way but euthanasia is little bit different. Euthanasia refer a direct causation of death by physician.In briefly PAD is a another case of freedom of choice, it provides a way to relieve extreme pain and also it provides a way of relief when a person quality of life is low and frees up a medical funds to help other people. Looking at the unacceptable side of PAD is physicians should not be involved in directly causing death and devalues human life also it can become a means of health care cost containment and also against to many religious cultures.

Do we want physician deciding who lives and who dies; Many people could argue this because controversial opinion regards subject to various ways of discussing this matter. This is important because dying is considered a human right. Patients with terminal illness will experience this type of medical procedure by PAD in order to achieve the medical ethics.

In any issue there are two sides for and against. PAD has many advantages. In the event when a patient start suffering from terminal illness he or she have a right to decide how they want to die. This right is as central to personal autonomy and bodily integrity. When considering a person suffering from terminally illness which is uncontrollable and time lag beyond control. PAD is positive procedure of applying the methods mentioned to relieve the families and the loved one from mental suffering because of the fate of the patient. The physician in attendance would need assistance from genuine care takers loved ones in handling the patient what ever the capacity. Sometimes that requires helping people to die. In case when serious patient of this nature suffering from the terminal illness is admitted to a nursing home dragging for a long time will develop certain amount of pressure to the loved once when the bills have to be settled. Any decision to take the patient away by PAD would is the suffering from both parties

.In 1994 November the Oregon Death with Dignity Act is passed becoming the first law in American history. After that including Oregon five US states Vermont, Washington, Montana, California permitted PAD. Then other eight western countries such as Belgium, Canada, Colombia, Finland, Germany, Luxembourg, the Netherlands and Switzerland legalised PAD. However, it is not legal in Sri Lanka.

Not only advantages but also it has disadvantages. When the PAD is not legal physician cannot go through with the practice and the physician will be conducts PAD he or she will be brought before law to meet out justice. Physicians role mainly a healer. Therefore it is no compatible with the oaths given by the medical practitioners. Some physicians are not agreeable to end the life of patients by PAD.PAD impacts some people differently. For instance the teachings of many religious leaders such as Buddhism, Catholicism etc are not agreeable. If PAD was right it would have been mentioned in the bible and that’s the reason that is not classified as necessary and why people think it is against certain religions. In considering the human moral it is argued by many parties that PAD is unfair, unnecessary and against. John Pearson writes about how PAD is unnecessary and painful both physically and emotionally. The great thinkers of the world and philosophers would have committed to this fact of PAD from the ancient time. Regrettably after effects of PAD not realised when it is legalised. Presently past decades laboratories have developed amazing medicine for various uncontrollable diseases such as nausea, breathlessness and other terminal symptoms for the benefits of serious patients. Of PAD was legalised this type of development would not take place.

The PAD has both advantages and disadvantages. Some people believe that PAD is morally wrong and unnecessary but on the other hand some people think it is the best thing to do and is necessary to bring release from suffering. However, this subject of Physician Assisted Death is open for discussion.

Why Active Euthanasia and Physician Assisted Suicide should be Legalized