The Arguments against Euthanasia 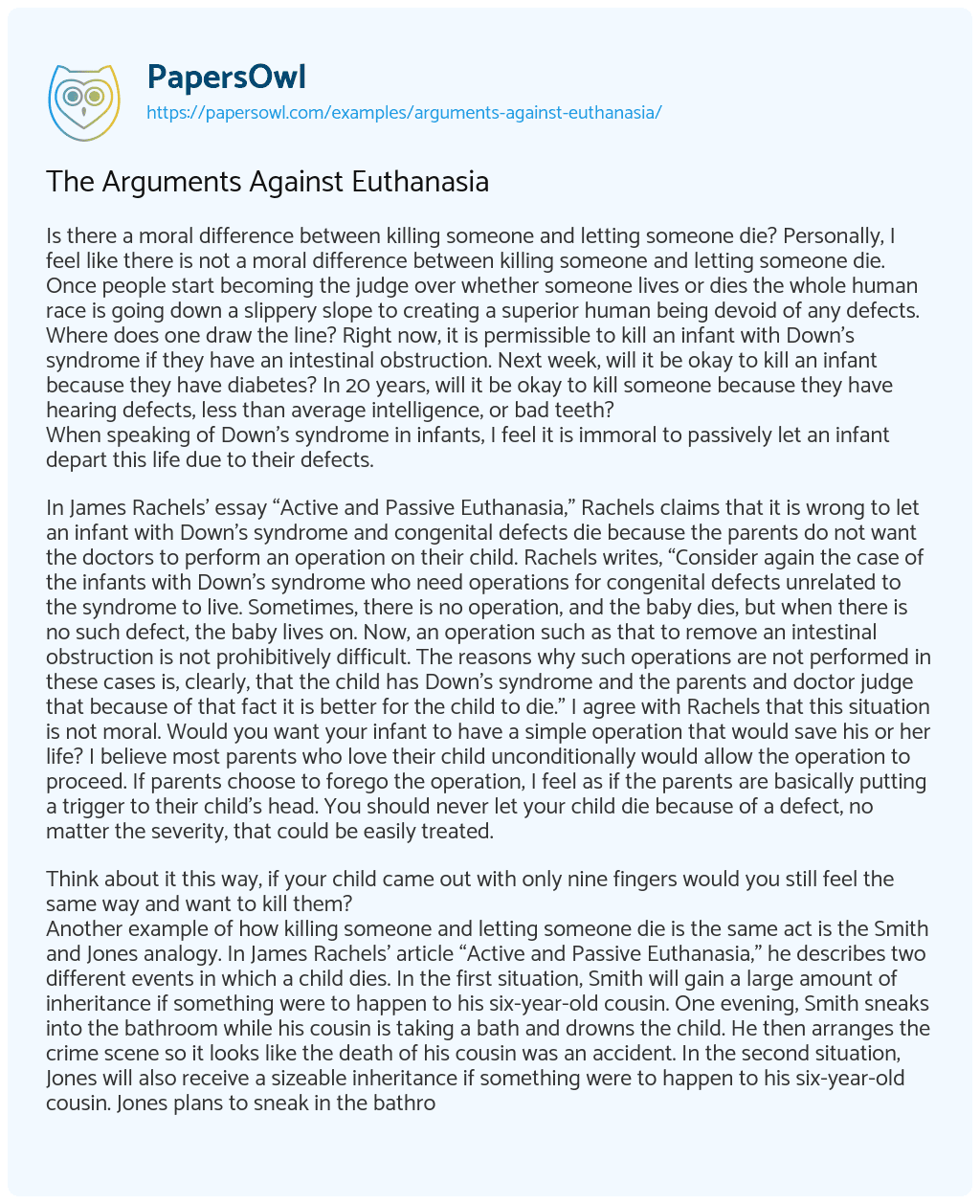 In James Rachels’ essay “Active and Passive Euthanasia,” Rachels claims that it is wrong to let an infant with Down’s syndrome and congenital defects die because the parents do not want the doctors to perform an operation on their child. Rachels writes, “Consider again the case of the infants with Down’s syndrome who need operations for congenital defects unrelated to the syndrome to live. Sometimes, there is no operation, and the baby dies, but when there is no such defect, the baby lives on. Now, an operation such as that to remove an intestinal obstruction is not prohibitively difficult. The reasons why such operations are not performed in these cases is, clearly, that the child has Down’s syndrome and the parents and doctor judge that because of that fact it is better for the child to die.” I agree with Rachels that this situation is not moral. Would you want your infant to have a simple operation that would save his or her life? I believe most parents who love their child unconditionally would allow the operation to proceed. If parents choose to forego the operation, I feel as if the parents are basically putting a trigger to their child’s head. You should never let your child die because of a defect, no matter the severity, that could be easily treated.

Think about it this way, if your child came out with only nine fingers would you still feel the same way and want to kill them?
Another example of how killing someone and letting someone die is the same act is the Smith and Jones analogy. In James Rachels’ article “Active and Passive Euthanasia,” he describes two different events in which a child dies. In the first situation, Smith will gain a large amount of inheritance if something were to happen to his six-year-old cousin. One evening, Smith sneaks into the bathroom while his cousin is taking a bath and drowns the child. He then arranges the crime scene so it looks like the death of his cousin was an accident. In the second situation, Jones will also receive a sizeable inheritance if something were to happen to his six-year-old cousin. Jones plans to sneak in the bathroom to drown the child just like Smith did to his cousin.

However, as he goes into bathroom he sees the child slip, hit his head, and fall face down into the water in the bathtub. Pleased to see this, Jones stands by waiting to push the child’s head back under the water, but it was not necessary. Jones watches the child slowly die and does nothing to prevent his passing. In both situations, the six-year-old cousin died. Smith killed the child and Jones simply let the child die. Rachels made a point in saying, “If the difference between killing and letting die were itself a morally important matter, one should say that Jones’s behavior was less responsible than Smith’s. But does one really want to say that?” Both situations were morally unsound. Smith killed the child, and Jones took no action into helping the child and preventing his premature death. Smith and Jones both committed acts that were immoral, lead to the death of a child, and should have consequences. Although Jones didn’t physically kill the child, he should be blamed for the death. Sitting there and watching your six-year-old cousin drown in the bathtub and standing there in case his head came up is sickening and is the same as physically and intentionally killing the child.
On the other hand, Bonnie Steinbock has a different view. Steinbock feels as if a common mistake in medical ethics is the belief that there is a moral difference between active and passive euthanasia. She says that, “The chances of success if the operation is undertaken are quite good, though there is always risk in operating on infants.” I believe taking a risk of any size is worth it to prevent the death of a child. Even if a child is born with a genetic disorder or birth defect, they should still be given the chance to live. These children may bring some difficulties and struggles into their parents’ lives, but they will also bring understanding, patience, and unconditional love. Being the parent to a child with disabilities may be difficult at times, but it is better than letting an innocent human being perish.

Passive euthanasia is when someone lets a human being die. For example, refusing treatment or turning a machine off that is keeping someone alive. Rachels understands passive euthanasia in certain situations. For example, he believes passive euthanasia is acceptable if a patient is dying from an incurable throat cancer and is in terrible pain that can no longer be alleviated. Doctors may even say that the patient is bound to die within a few days even if treatment is continued. The patient might ask the doctors to end his life because of the unbearable pain and suffering. The family may join in on the request of passive euthanasia, if needed. However, there are still opponents to passive euthanasia in situations similar to the one I just described. I feel if someone is so sick and in a massive amount of pain, they should have a choice to end their lives. If it is a situation where the patient is unconscious and has a very unlikely chance of waking up, the parents or close family members should choose to turn the machines off. In any case, choosing to passively euthanize yourself or a family member should be decided with careful thought and consideration.

Overall, in my opinion, I feel like there is no moral difference between killing someone and letting someone die. A child with Down’s syndrome and an intestinal obstruction should be treated the same way as a child with a hearing defect or any other disorder. Parents should not have the right to deny a simple surgery simply because the child has Down’s syndrome. I believe the Smith and Jones analogy is a prime example of how killing and letting someone die is the same act performed different ways. Although, I believe passive euthanasia in certain situations is understandable. If someone is in terrible pain and is not thought to live much longer asks to end their life, that is acceptable. This circumstance is completely different than not wanting a doctor to perform surgery on your child knowing that they will likely die without it. Although Rachels and Steinbock have different views and opinions on the American Medical Association policies, they both take their stance and make very good arguments on their views. All in all, we as humans shouldn’t have the right to decide who gets to live and who dies. A human being is a human being. Nobody, no matter who they are, has the right to end a life.

The Arguments Against Euthanasia. (2022, Feb 10). Retrieved from https://papersowl.com/examples/arguments-against-euthanasia/