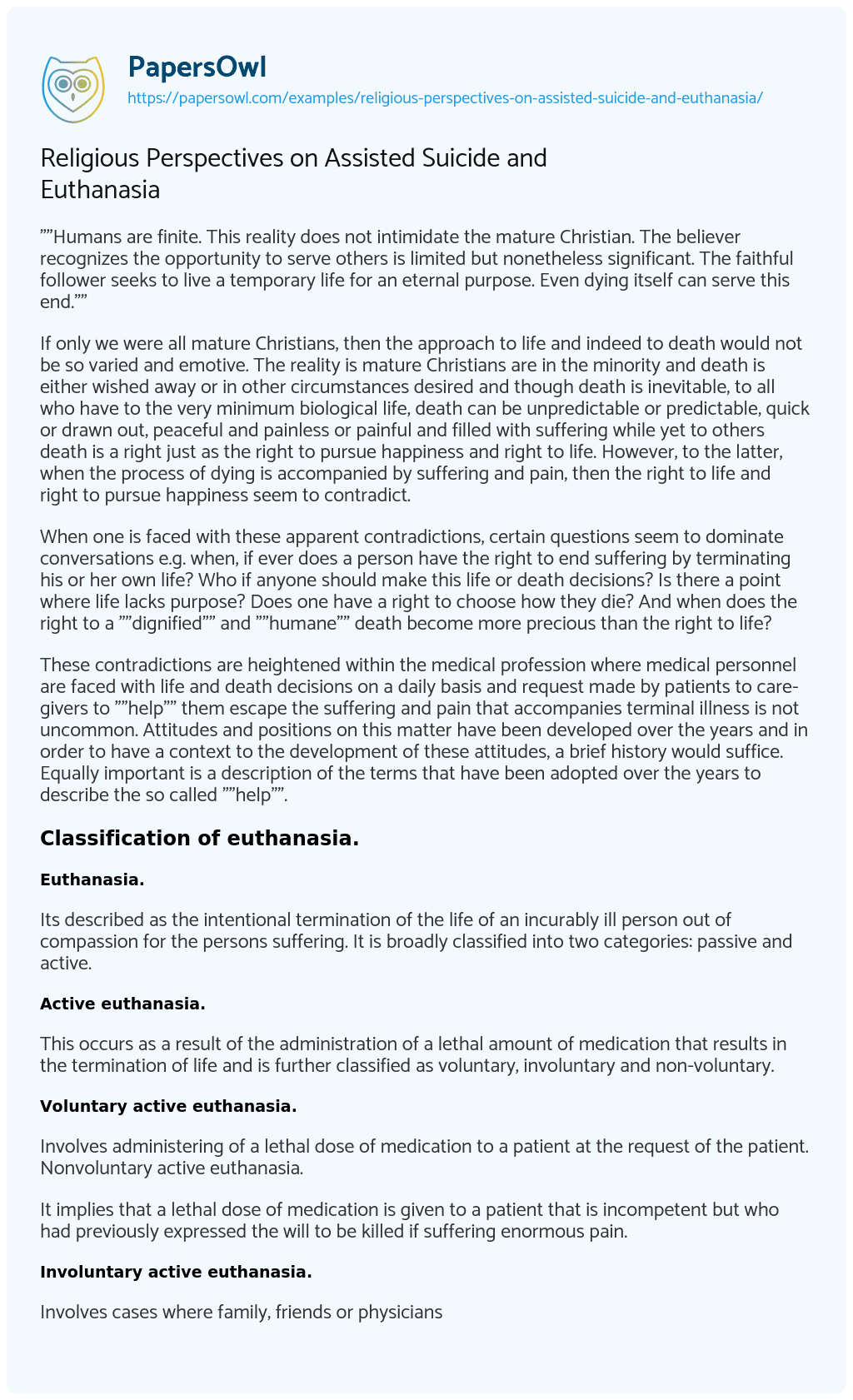 “”Humans are finite. This reality does not intimidate the mature Christian. The believer recognizes the opportunity to serve others is limited but nonetheless significant. The faithful follower seeks to live a temporary life for an eternal purpose. Even dying itself can serve this end.””

If only we were all mature Christians, then the approach to life and indeed to death would not be so varied and emotive. The reality is mature Christians are in the minority and death is either wished away or in other circumstances desired and though death is inevitable, to all who have to the very minimum biological life, death can be unpredictable or predictable, quick or drawn out, peaceful and painless or painful and filled with suffering while yet to others death is a right just as the right to pursue happiness and right to life. However, to the latter, when the process of dying is accompanied by suffering and pain, then the right to life and right to pursue happiness seem to contradict.

When one is faced with these apparent contradictions, certain questions seem to dominate conversations e.g. when, if ever does a person have the right to end suffering by terminating his or her own life? Who if anyone should make this life or death decisions? Is there a point where life lacks purpose? Does one have a right to choose how they die? And when does the right to a “”dignified”” and “”humane”” death become more precious than the right to life?

These contradictions are heightened within the medical profession where medical personnel are faced with life and death decisions on a daily basis and request made by patients to care- givers to “”help”” them escape the suffering and pain that accompanies terminal illness is not uncommon. Attitudes and positions on this matter have been developed over the years and in order to have a context to the development of these attitudes, a brief history would suffice. Equally important is a description of the terms that have been adopted over the years to describe the so called “”help””.

Its described as the intentional termination of the life of an incurably ill person out of compassion for the persons suffering. It is broadly classified into two categories: passive and active.

This occurs as a result of the administration of a lethal amount of medication that results in the termination of life and is further classified as voluntary, involuntary and non-voluntary.

Involves administering of a lethal dose of medication to a patient at the request of the patient. Nonvoluntary active euthanasia.

It implies that a lethal dose of medication is given to a patient that is incompetent but who had previously expressed the will to be killed if suffering enormous pain.

Involves cases where family, friends or physicians make the decision to end a patient’s life knowing that this person would want to be killed under these circumstances.

This describes the death of a person who is terminally ill by forgoing potentially life prolonging measures. Along with the forgoing of the application of life prolonging technologies, is the actual administering of palliative treatment that may result in death . The physician’s main intent is to control pain but the medicinal dosage may also hasten death . It is subclassified as voluntary, nonvoluntary and involuntary.

This describes cases in which the patient requests that certain medicinal treatment be withheld or withdrawn. It also includes incapable patients who indirectly communicate their treatment wishes with written advance directives or by previous oral testimony.

This includes cases in which one does not know for sure what treatment an incompetent patient wants but there is a good reason that the person would want to die in the circumstances. Involuntary passive euthanasia.

Describes cases in which death of the patient(who is terminally ill) occurs as a direct result of withdrawal of medical technology that is life prolonging without the express will of the patient but relying on other parties to effect the withdrawal. It assumed this is the patient’s best interest.

This describes a situation where the choice in dying rests fully with the patient but specifically the physician supplies the lethal dose of medication to end life and the patient administers it to him or herself.