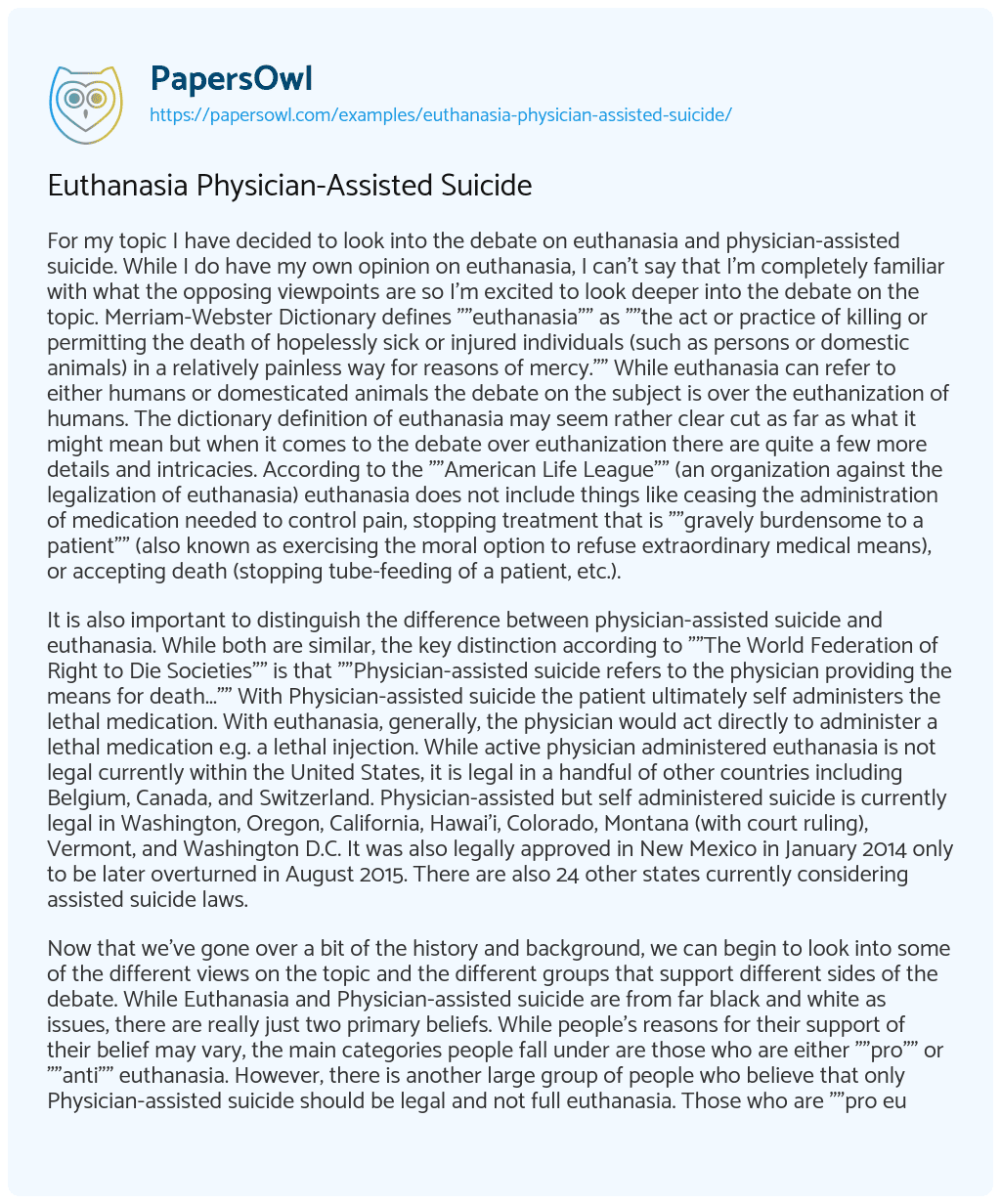 For my topic I have decided to look into the debate on euthanasia and physician-assisted suicide. While I do have my own opinion on euthanasia, I can’t say that I’m completely familiar with what the opposing viewpoints are so I’m excited to look deeper into the debate on the topic. Merriam-Webster Dictionary defines “”euthanasia”” as “”the act or practice of killing or permitting the death of hopelessly sick or injured individuals (such as persons or domestic animals) in a relatively painless way for reasons of mercy.”” While euthanasia can refer to either humans or domesticated animals the debate on the subject is over the euthanization of humans. The dictionary definition of euthanasia may seem rather clear cut as far as what it might mean but when it comes to the debate over euthanization there are quite a few more details and intricacies. According to the “”American Life League”” (an organization against the legalization of euthanasia) euthanasia does not include things like ceasing the administration of medication needed to control pain, stopping treatment that is “”gravely burdensome to a patient”” (also known as exercising the moral option to refuse extraordinary medical means), or accepting death (stopping tube-feeding of a patient, etc.).

Now that we’ve gone over a bit of the history and background, we can begin to look into some of the different views on the topic and the different groups that support different sides of the debate. While Euthanasia and Physician-assisted suicide are from far black and white as issues, there are really just two primary beliefs. While people’s reasons for their support of their belief may vary, the main categories people fall under are those who are either “”pro”” or “”anti”” euthanasia. However, there is another large group of people who believe that only Physician-assisted suicide should be legal and not full euthanasia. Those who are “”pro euthanasia”” are those in support of the legalization of euthanasia. There are many beliefs held by those who support euthanasia as to why they believe it should be legal. One of the biggest ones is the belief that it is better to allow someone to die with dignity rather than to drag one’s life and/or suffering out longer than they want for it to happen. Another argument is that the patient should have the right to choose what one wants to endure. If someone has a terminal or painful illness with no treatment options besides pain management or other palliative care choices they shouldn’t be forced to extend their life or suffer longer than they want to and should be allowed to make the choice for themselves. Coming in to this paper, these are the beliefs I personally hold. I personally feel that while there is a lot that can be done in the way of pain management, palliative, or hospice care, ultimately, if someone no longer wants to suffer or be confined to a hospital or home bed, they should be given that choice.

Although currently a few states including California do allow for physician-assisted suicide, some patients may struggle to look at this as not morally wrong or taboo. Many patients may struggle with self administered lethal medication as it may seem to them more like suicide rather than a medical procedure or measure. This is why I believe specifically in the legalization of euthanasia instead of just the legalization of physician-assisted suicide. By religious affiliation, the groups of people most in support of euthanasia in the United States are either non-affiliated religiously or are liberal Protestants (including some Presbyterians and Episcopalians). While one of the main arguments against euthanasia is one based upon religious beliefs, liberal protestants tend to associate more loosely with religious institutions. White Americans have also been shown in recent studies to be more in support of euthanasia than black Americans. Black Americans are almost three times more likely to oppose euthanasia. A Gallup poll done in 2005 also showed that 84% of males are found to be in support of euthanasia as opposed to only 64% of females.

Now to dive into some of the opposing views and the reasons that they might be in opposition of euthanasia. A largely held belief and frequently used argument is that there are alternative treatments available and that virtually all pain can be relieved via pain management and other palliative care. Another argument is that opening the doors to voluntary euthanasia could be a slippery slope and lead to cases of involuntary euthanasia by accidentally giving the doctors power to decide whether or not a patient’s life is worth living. In the Netherlands in the year 1990, reportedly, 1,000 patients were killed without direct request to the doctor. I can see how this could be quite the cause for concern for people, especially those who would not want that choice to be made for them. As well as the concern of patients feeling a “”duty”” to die rather than a “”right”” to die and possibly making a choice that they may regret. There is also what I would consider the most radical reason to oppose euthanasia (or any political issue for that matter), religious beliefs. There is a rather vocal section of opposition to euthanasia with a basis in the fact that physician-assisted suicide and euthanasia are essentially legal suicide or murder and thusly immoral and against the beliefs of their church. While this may be a bias that causes someone to make an emotional decision rather than a logic based one, the people who hold these beliefs often also support the other more logical and fair arguments against euthanasia that I’ve gone over prior to theirs. I was pleased to find articles in opposition of euthanasia based solely on religious beliefs very hard to come by. The makeup of this side of the argument is predictably just the opposite of the makeup of those in support of euthanasia. Christian denominations such as Southern Baptists, Pentecostals, and Evangelicals and Catholics tend to be the most opposed to euthanasia. Moderate Protestants such as Lutherans and Methodists tend to be fairly mixed as far as their support or rebuke.

Coming into this I would say that I definitely expected far more outrageous opinions and takes since it seemed like a heavily emotional topic seeing that it is not only a literal life and death situation, but that the majority of people with strong opinions on the subject either have their opinions from experience with loved ones, or religious belief. I was pleased to see how logical and fair many of the counterpoints to my beliefs on the topic were. I can definitely see how my view on the subject is influenced by both my core value and my personality type. With my core value being “”risk”” and my personality type being ENTJ, or the “”commander””, I am someone who likes to be in control and be able to make choices for myself. I like to have options open and available and not feel as though I have no say in a matter. I can even see how my personality and core value changed the way I went about this paper. I can say that I was definitely too stubborn and uninterested in changing my view when I first began researching the opposing viewpoints but can say that I think I have gained some perspective and a more objective opinion on the subject through the research required by this paper. While I can’t really say that my view has ultimately shifted significantly, I would say that I now understand that there is a lot more that needs to be factored into the creation of this legislation that I wasn’t aware of prior to learning more about it. I think my biggest takeaway was seeing the issues that countries like the Netherlands faced and continues to now face in regards to their legalization of euthanasia. I now personally think as far as application within the United States, euthanasia needs to be looked at very carefully and we need to make sure that the decision is not a rushed or incomplete one as you don’t want to create more difficult situations for people in an attempt to provide another option. I think that the direction the United States is currently headed with many states legalizing physician-assisted suicide is the right direction for now and I not only plan to continue to be more open-minded about this specific issue, but other issues that I form opinions on in the future.