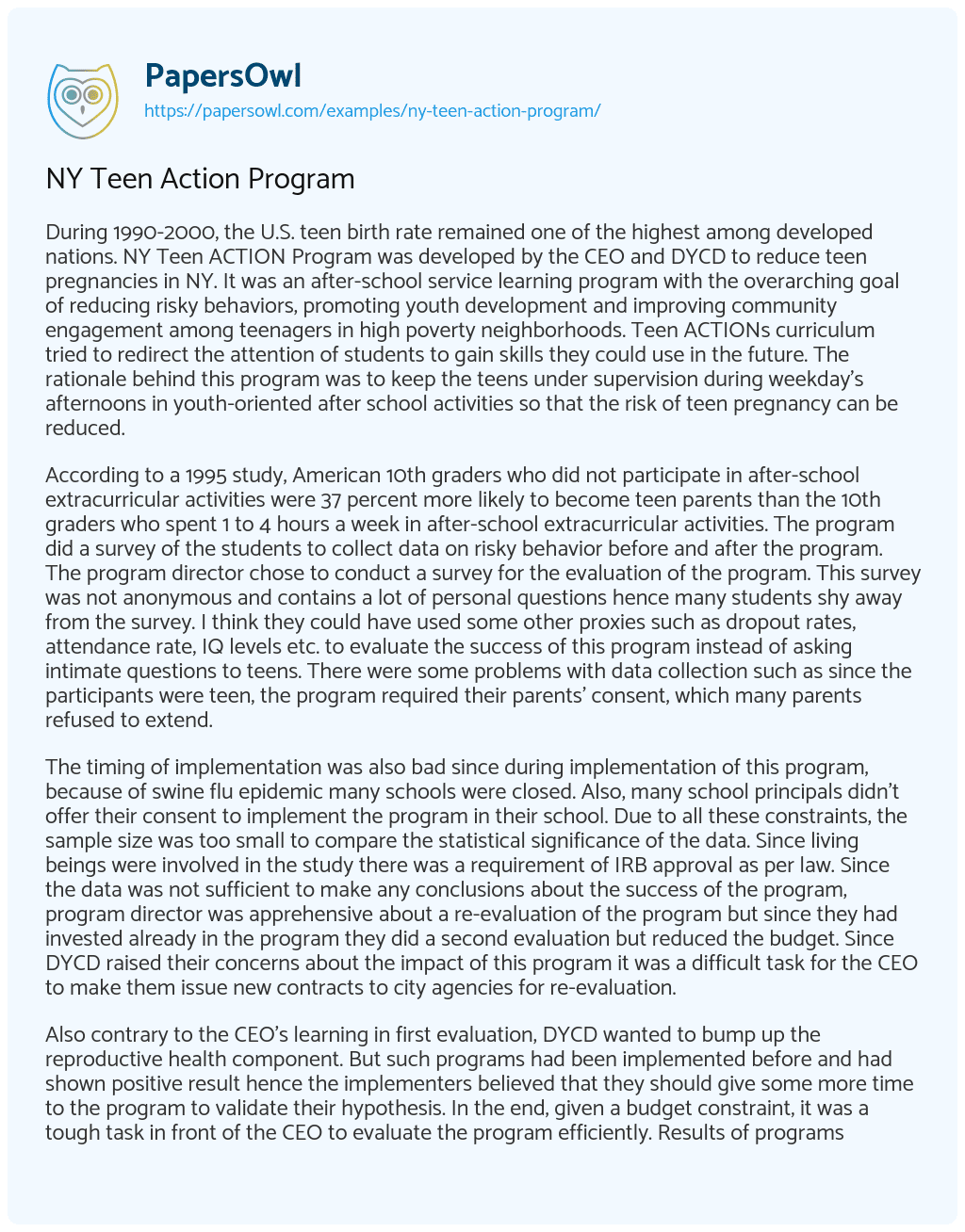 During 1990-2000, the U.S. teen birth rate remained one of the highest among developed nations. NY Teen ACTION Program was developed by the CEO and DYCD to reduce teen pregnancies in NY. It was an after-school service learning program with the overarching goal of reducing risky behaviors, promoting youth development and improving community engagement among teenagers in high poverty neighborhoods. Teen ACTIONs curriculum tried to redirect the attention of students to gain skills they could use in the future. The rationale behind this program was to keep the teens under supervision during weekday’s afternoons in youth-oriented after school activities so that the risk of teen pregnancy can be reduced.

According to a 1995 study, American 10th graders who did not participate in after-school extracurricular activities were 37 percent more likely to become teen parents than the 10th graders who spent 1 to 4 hours a week in after-school extracurricular activities. The program did a survey of the students to collect data on risky behavior before and after the program. The program director chose to conduct a survey for the evaluation of the program. This survey was not anonymous and contains a lot of personal questions hence many students shy away from the survey. I think they could have used some other proxies such as dropout rates, attendance rate, IQ levels etc. to evaluate the success of this program instead of asking intimate questions to teens. There were some problems with data collection such as since the participants were teen, the program required their parents’ consent, which many parents refused to extend.

The timing of implementation was also bad since during implementation of this program, because of swine flu epidemic many schools were closed. Also, many school principals didn’t offer their consent to implement the program in their school. Due to all these constraints, the sample size was too small to compare the statistical significance of the data. Since living beings were involved in the study there was a requirement of IRB approval as per law. Since the data was not sufficient to make any conclusions about the success of the program, program director was apprehensive about a re-evaluation of the program but since they had invested already in the program they did a second evaluation but reduced the budget. Since DYCD raised their concerns about the impact of this program it was a difficult task for the CEO to make them issue new contracts to city agencies for re-evaluation.

Also contrary to the CEO’s learning in first evaluation, DYCD wanted to bump up the reproductive health component. But such programs had been implemented before and had shown positive result hence the implementers believed that they should give some more time to the program to validate their hypothesis. In the end, given a budget constraint, it was a tough task in front of the CEO to evaluate the program efficiently. Results of programs are more qualitative than quantitative in nature. Instead of looking solely at the statistical significance and power analysis, the program should look into qualitative terms such as improvement in the health of teens, participation in the extra curriculum, improved ability, various personality traits etc.

Evaluation of the Teen Pregnancy Program

Program Evaluation of the D.A.R.E. Program