Nutritional Effects: this Will Change the Way you Look at Food 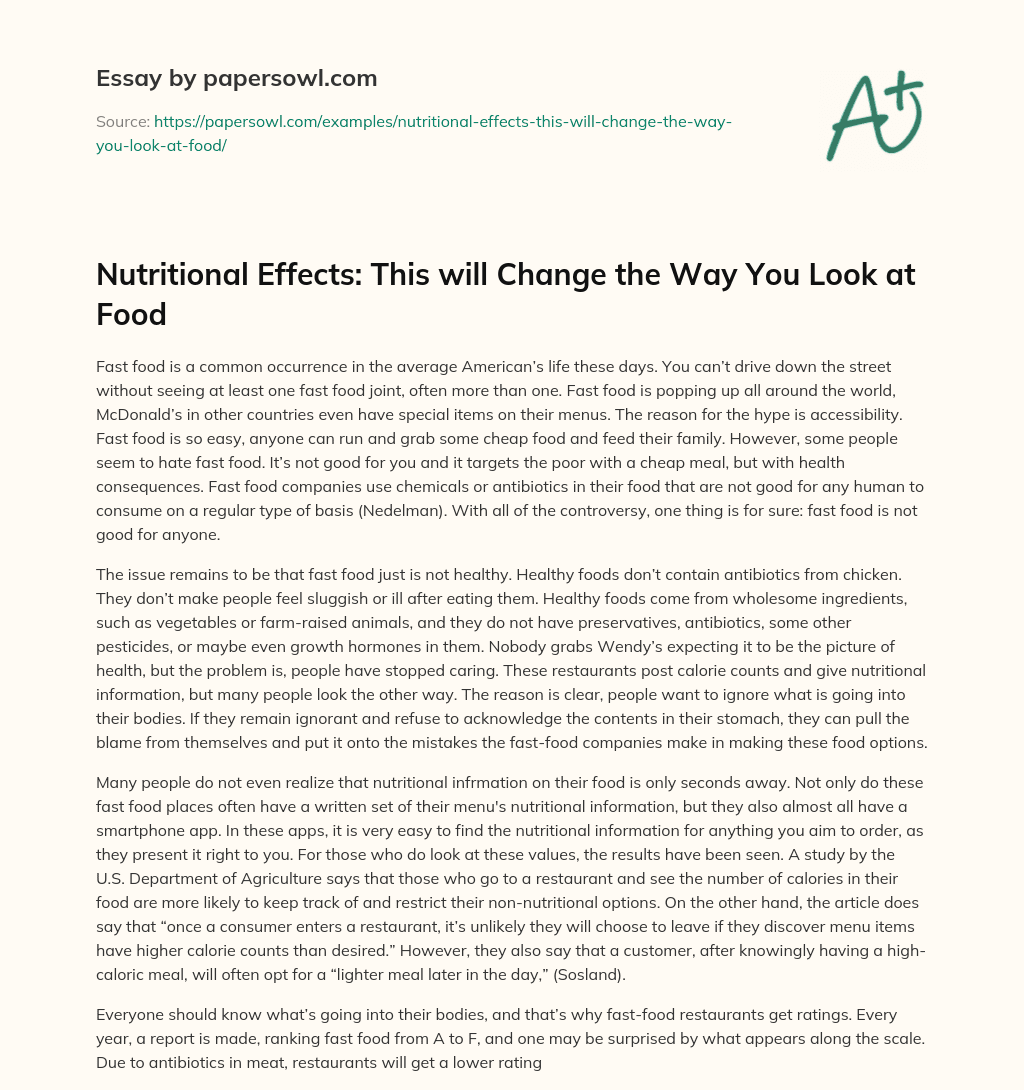 Fast food is a common occurrence in the average American’s life these days. You can’t drive down the street without seeing at least one fast food joint, often more than one. Fast food is popping up all around the world, McDonald’s in other countries even have special items on their menus. The reason for the hype is accessibility. Fast food is so easy, anyone can run and grab some cheap food and feed their family. However, some people seem to hate fast food. It’s not good for you and it targets the poor with a cheap meal, but with health consequences. Fast food companies use chemicals or antibiotics in their food that are not good for any human to consume on a regular type of basis (Nedelman). With all of the controversy, one thing is for sure: fast food is not good for anyone.

The issue remains to be that fast food just is not healthy. Healthy foods don’t contain antibiotics from chicken. They don’t make people feel sluggish or ill after eating them. Healthy foods come from wholesome ingredients, such as vegetables or farm-raised animals, and they do not have preservatives, antibiotics, some other pesticides, or maybe even growth hormones in them. Nobody grabs Wendy’s expecting it to be the picture of health, but the problem is, people have stopped caring. These restaurants post calorie counts and give nutritional information, but many people look the other way. The reason is clear, people want to ignore what is going into their bodies. If they remain ignorant and refuse to acknowledge the contents in their stomach, they can pull the blame from themselves and put it onto the mistakes the fast-food companies make in making these food options.

Many people do not even realize that nutritional infrmation on their food is only seconds away. Not only do these fast food places often have a written set of their menu’s nutritional information, but they also almost all have a smartphone app. In these apps, it is very easy to find the nutritional information for anything you aim to order, as they present it right to you. For those who do look at these values, the results have been seen. A study by the U.S. Department of Agriculture says that those who go to a restaurant and see the number of calories in their food are more likely to keep track of and restrict their non-nutritional options. On the other hand, the article does say that “once a consumer enters a restaurant, it’s unlikely they will choose to leave if they discover menu items have higher calorie counts than desired.” However, they also say that a customer, after knowingly having a high-caloric meal, will often opt for a “lighter meal later in the day,” (Sosland).

Everyone should know what’s going into their bodies, and that’s why fast-food restaurants get ratings. Every year, a report is made, ranking fast food from A to F, and one may be surprised by what appears along the scale. Due to antibiotics in meat, restaurants will get a lower rating because those chemicals are just not good for human consumption, and restaurants that are choosing to fix their menu get raised. Two who are trying to get better are Subway and KFC, who both are now in the B section of the rating. However, just last year KFC was rated as F, just because of how bad these substances are (Nedelman).

If you’ve looked at documentaries, such as the McDonald’s documentary, “Super Size Me”, and other fast food documentaries you probably noticed that fast food has a long-term effect on a human’s health. Fast food isn’t bad as long as you eat it every once in a while, but many people choose to eat fast food every single day. Without looking into what you’re eating, you are setting yourself up for poor health. Studies have proven a link between fast-food consumption and an increased risk of developing or dying from heart disease (Renee).

As stated earlier, there are many of people who don’t want to know what’s in their food. But that is not everyone. Every person has a right to know how any product put in their body will affect them. Just as you see on labels such as pills and medications; all of these come with a warning label, telling you what could go wrong when you’re using it or consuming it, telling you how to consume it correctly. So why is the food any different? Just because some people do not want to know what is in their food does not mean that the rest of the population should suffer. All fast food be presented with the nutritional guidelines more clearly stated.

Fast food leads to poor health. This is made clear time and time again, yet many Americans ignore the warnings and head for the cheapest option. However, some people do not know just how bad what they are putting into their bodies is for them. While there are several ways in which one can find the nutritional facts of their food, they all require an amount of research and effort. To be frank, many people are not willing to put that effort in. To save the health and hearts of our country, fast food needs to be equipped with nutritional labels. Right on the package. The only way to make things more healthy is to first inform everyone just how unhealthy they are.

Nutritional Effects: This will Change the Way You Look at Food. (2022, May 03). Retrieved from https://papersowl.com/examples/nutritional-effects-this-will-change-the-way-you-look-at-food/

Here’s how Fast Food Can Affect your Body

The Effects Eating Junk Food have on Health