My Research on Diabetes 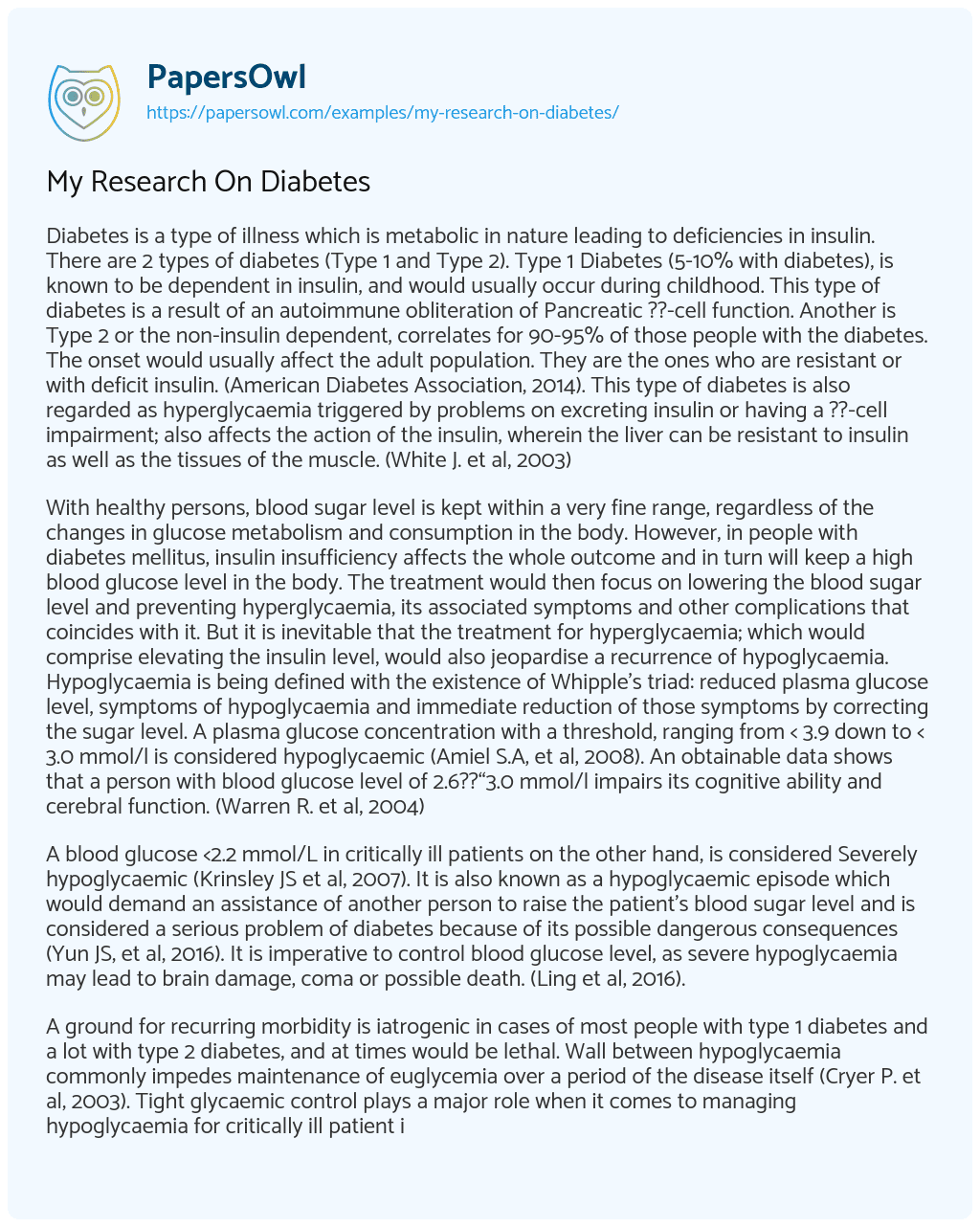 Diabetes is a type of illness which is metabolic in nature leading to deficiencies in insulin. There are 2 types of diabetes (Type 1 and Type 2). Type 1 Diabetes (5-10% with diabetes), is known to be dependent in insulin, and would usually occur during childhood. This type of diabetes is a result of an autoimmune obliteration of Pancreatic ??-cell function. Another is Type 2 or the non-insulin dependent, correlates for 90-95% of those people with the diabetes. The onset would usually affect the adult population. They are the ones who are resistant or with deficit insulin. (American Diabetes Association, 2014). This type of diabetes is also regarded as hyperglycaemia triggered by problems on excreting insulin or having a ??-cell impairment; also affects the action of the insulin, wherein the liver can be resistant to insulin as well as the tissues of the muscle. (White J. et al, 2003)

With healthy persons, blood sugar level is kept within a very fine range, regardless of the changes in glucose metabolism and consumption in the body. However, in people with diabetes mellitus, insulin insufficiency affects the whole outcome and in turn will keep a high blood glucose level in the body. The treatment would then focus on lowering the blood sugar level and preventing hyperglycaemia, its associated symptoms and other complications that coincides with it. But it is inevitable that the treatment for hyperglycaemia; which would comprise elevating the insulin level, would also jeopardise a recurrence of hypoglycaemia. Hypoglycaemia is being defined with the existence of Whipple’s triad: reduced plasma glucose level, symptoms of hypoglycaemia and immediate reduction of those symptoms by correcting the sugar level. A plasma glucose concentration with a threshold, ranging from

A ground for recurring morbidity is iatrogenic in cases of most people with type 1 diabetes and a lot with type 2 diabetes, and at times would be lethal. Wall between hypoglycaemia commonly impedes maintenance of euglycemia over a period of the disease itself (Cryer P. et al, 2003). Tight glycaemic control plays a major role when it comes to managing hypoglycaemia for critically ill patient in the intensive care unit. (Meijering S. et al, 2006). According to their study it is desirable to use a dynamic scale protocol with continuous insulin infusion combined with regular blood glucose determinations (1-4 hours) and to use the blood glucose determinants to follow the infusion rate.

As for the treatment of hypoglycaemic episode in critical care setting as proposed by Davidson and coworkers, 2008, is to treat it with IV Glucose. With the current practice to sustain euglycemia with a dynamic insulin infusion. Low blood sugar needs to be treated on a target range because excessive glucose treatment forces the blood glucose above the target range. This would then generate the formula for maintaining normal blood sugar level to increase the insulin dose. Resulting in cycle of blood sugar level above and below the target range. They recommend giving 15 ml of D50 IV for all types of hypoglycaemia in ICU patients. Vials or pre-drawn syringes should be readily available to treat

Correlating the treatments proposed by literatures mentioned above, my patient is on continuous sliding scale as per protocol following his baseline and previous blood sugar readings. As soon as I obtained ABG and saw how low the blood sugar was, I informed the doctor on duty as well as the Nurse in Charge. I stopped the insulin infusion and gave a bolus of 20 ml of 50% IV Glucose as prescribed. According to one of the literatures, it is possible and safe to keep blood sugar level at 6.1 mmol/L with the use of titration algorithm. The benefit of the intensive insulin treatment was similarly present irrespective if patient is receiving enteral feeding. (Green VdB. et al, 2003). Another thing to reflect is that the patient was on Methylprednisolone and was abruptly decreased on the dosage and frequency. As revealed by the literature, a quick drop or abrupt withdrawal of corticosteroid therapy that was on high doses can cause Secondary adrenal insufficiency (suppression of the HPA axis) and because of this some patient may exhibit hypoglycaemia (Alves C. et al, 2008). Right after the interventions done, the blood sugar level went up to 5.6 mmol/L and continously monitored thereafter.

NHS released guideline that can be followed for managing Hypoglycaemia. For patient with a blood glucose level

I realise that with all the complexities in critical care, that doesn’t mean overlooking the small details that might entail a very high consequence. Being able to address the patient’s blood sugar level and managing it the soonest possible time prevented a more complicated outcome that may arise. Several interventions have been presented that can be considered and it gives me confidence of the overall treatment, be proactive and involve myself in decision making.

My Research On Diabetes. (2019, Feb 17). Retrieved from https://papersowl.com/examples/my-research-on-diabetes/

What should you Know about Diabetes