More’s Utopia and the Concept of Gender Roles 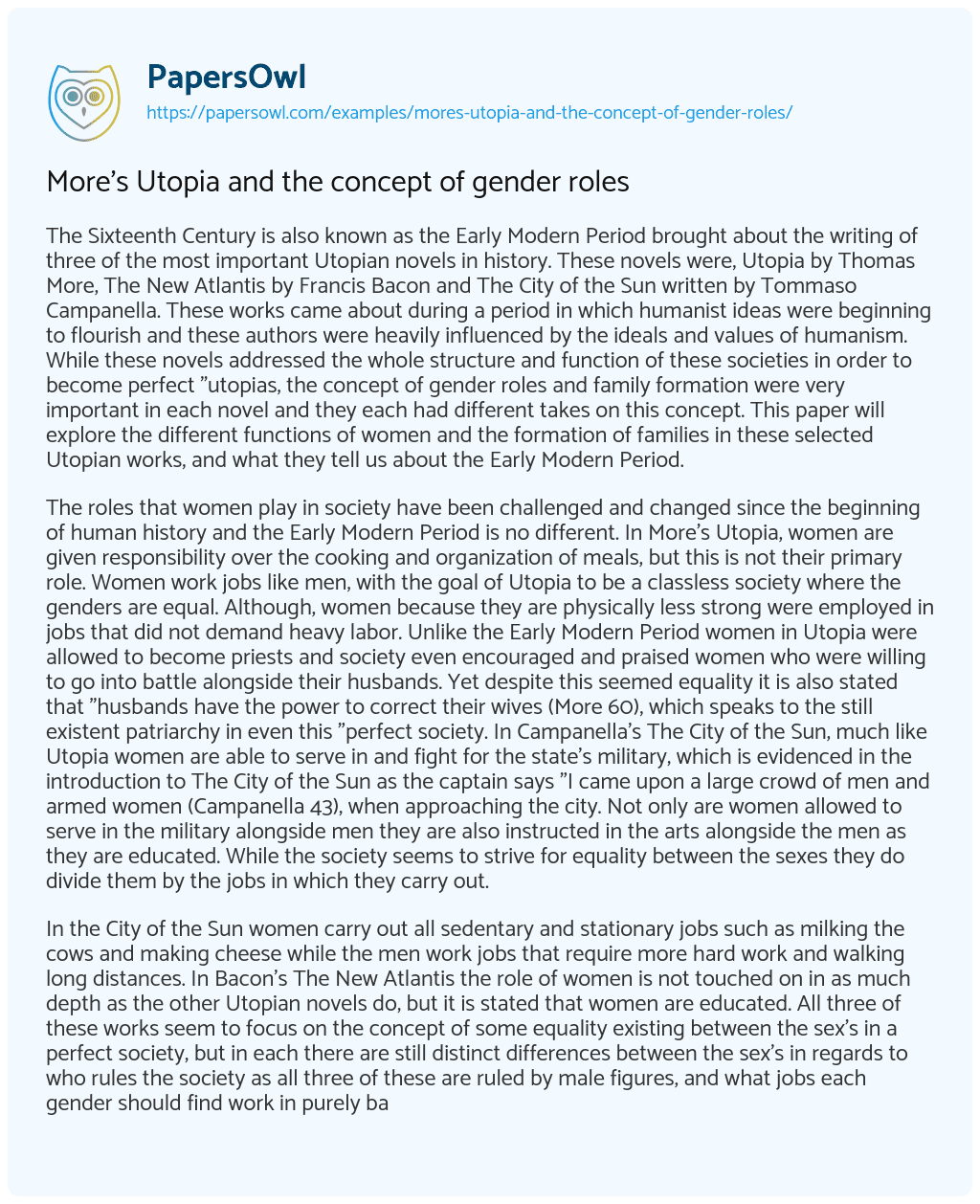 The Sixteenth Century is also known as the Early Modern Period brought about the writing of three of the most important Utopian novels in history. These novels were, Utopia by Thomas More, The New Atlantis by Francis Bacon and The City of the Sun written by Tommaso Campanella. These works came about during a period in which humanist ideas were beginning to flourish and these authors were heavily influenced by the ideals and values of humanism. While these novels addressed the whole structure and function of these societies in order to become perfect “utopias, the concept of gender roles and family formation were very important in each novel and they each had different takes on this concept. This paper will explore the different functions of women and the formation of families in these selected Utopian works, and what they tell us about the Early Modern Period.

The roles that women play in society have been challenged and changed since the beginning of human history and the Early Modern Period is no different. In More’s Utopia, women are given responsibility over the cooking and organization of meals, but this is not their primary role. Women work jobs like men, with the goal of Utopia to be a classless society where the genders are equal. Although, women because they are physically less strong were employed in jobs that did not demand heavy labor. Unlike the Early Modern Period women in Utopia were allowed to become priests and society even encouraged and praised women who were willing to go into battle alongside their husbands. Yet despite this seemed equality it is also stated that “husbands have the power to correct their wives (More 60), which speaks to the still existent patriarchy in even this “perfect society. In Campanella’s The City of the Sun, much like Utopia women are able to serve in and fight for the state’s military, which is evidenced in the introduction to The City of the Sun as the captain says “I came upon a large crowd of men and armed women (Campanella 43), when approaching the city. Not only are women allowed to serve in the military alongside men they are also instructed in the arts alongside the men as they are educated. While the society seems to strive for equality between the sexes they do divide them by the jobs in which they carry out.

In the City of the Sun women carry out all sedentary and stationary jobs such as milking the cows and making cheese while the men work jobs that require more hard work and walking long distances. In Bacon’s The New Atlantis the role of women is not touched on in as much depth as the other Utopian novels do, but it is stated that women are educated. All three of these works seem to focus on the concept of some equality existing between the sex’s in a perfect society, but in each there are still distinct differences between the sex’s in regards to who rules the society as all three of these are ruled by male figures, and what jobs each gender should find work in purely based off of physical ability. These gender roles are not much different than what was existent in the Early Modern Period with women in charge of cooking and other household chores, whereas men were working in the trades and specifically in jobs that required intense physical labor.

While these three works have many similarities in regards to the role of women in their societies there are many discrepancies in regard to the rules and importance of marriage to each. In Utopia marriage comes along with many rules in order to maintain it’s sanctity in society. Women are unable to marry until the age of eighteen, and men unable until the age of twenty-two. Any sort of premarital sexual contact is severely forbidden and if anyone’s caught in this act they are forbidden by the government to marry for the rest of their lives. In regards to the process, before marriage, the bride and groom are unveiled to one another naked by a person of their own gender in order to avoid any surprises on their wedding day and to maintain that no one else has seen them naked which would again disturb the sanctity of marriage. Marriage in Utopia is a lifelong commitment with divorce only permitted in cases of severe abuse or adultery. Not only would an adulterer be divorced in Utopia but the state would then condemn them to a life of slavery for their actions. More’s Utopian vision seems to follow many of the doctrines of marriage in Christianity, making it the most relatable to the Early Modern Period. While Utopia held marriage as inherently important and a life achievement that many look forward to Bacon’s vision in The New Atlantis, paints marriage as quite the opposite, almost undesirable.

Many men choose not to marry and instead “choose rather a libertine and impure single life, than to be yoked in marriage; and many that do marry, marry late, when the prime and strength of their years is passed (Bacon 27). They would rather live a life free to do what they choose, for “the delight in meretricious embracements, maketh marriage a dull thing, and a kind of imposition or tax (Bacon 27). Yet, these actions are not without consequence as many of the men wait till they’re older to marry and have children, this brings about many birth deformities and children that do not possess the necessary strength or intelligence that society requires. The City of the Sun offers another stance on and process to marriage that goes against many of the core beliefs of Christianity despite being written by a Dominican friar. Price Mor in The City of the Sun, who is also known as “Love oversees the joining together of men and women for reproduction. Yet, this joining is not done in the goal of creating a loving partnership instead it is done in order to produce the best possible offspring. Women are communal property, not married to one man but essentially to the whole community as there is no concept of private-property in this Utopian vision, everything is done for the benefit and love of the state. This concept is not only present in marriage in The City of the Sun but also in the family structure.

This management of reproduction by “Love manages the race for the good of the commonwealth and not the individual. They deny what the Early Modern Period and we still today hold, “that it is natural to man to recognize his offspring and to educate them, and to use his wife and house and children as his own. For they say that children are bred for the preservation of the species and not for individual pleasure (Campanella 60). Furthermore, children are not raised by their parents but after two years of being cared for and milked by their mothers in a temple set apart specifically for this period, the child is given to a master if a boy and a mistress if a female, to be educated and brought up alongside other children by the state. This state control displayed in this novel is one of the earliest instances of a socialist based government and community system, and many societies and politicians took ideas from Campanella’s work in the later periods. Despite the seeming unimportance of marriage in The New Atlantis, any man who lives to see thirty people descended from his own body and over the age of three is subject to a family feast at the cost of the state, as well as many gifts of money, of privileges and exemptions are given to the father by the King. This is seen as a reward for fulfilling his duties as a man to improve the kingdom by contributing to it through growing the population which leads to various improvements.

While huge families are seen as a great thing in The New Atlantis, in Utopia there are limits on the number of members a family is allowed to have, this being no more than sixteen but no less than ten. Although in country families, no family can have less than forty males and females, to ensure they can carry out the farm work. This rule is in place to ensure that no city becomes too great and no city too weak due to population. In order to adhere to this rule any fruitful couple that is reproducing above the limit will have children taken from them and given to a less successful family whether that’s on the same land mass or another. This process is constantly being utilized to ensure healthy populations across all the lands of Utopia. In the family itself the oldest man is it’s governor, while the wives serve the husbands, children serve the parents and the younger always serves the elder. This family structure resonates the most with the Early Modern Period in regards to each member’s role.

The Early Modern Period brought about a lot of change in the world and much of that change is still with us today. The concepts of Utopias were written with the goal of influencing Sixteenth Century society along the lines of gender roles, family structure and marriage as well as religion. All three of these works were written in the same period yet offer various ways to create this perfect society and there are things to take away from each. The concept of marriage and family structure in More’s Utopia has been guidelines for society, in the Early Modern Period and still today not much has changed. Campanella’s vision of family structure influenced and brought about much of socialist ideology especially in this period. While many of Bacon’s ideas on marriage spurred countercultures, unfocused on marriage and instead on men’s own achievements.

More's Utopia and the concept of gender roles. (2020, Jan 24). Retrieved from https://papersowl.com/examples/mores-utopia-and-the-concept-of-gender-roles/