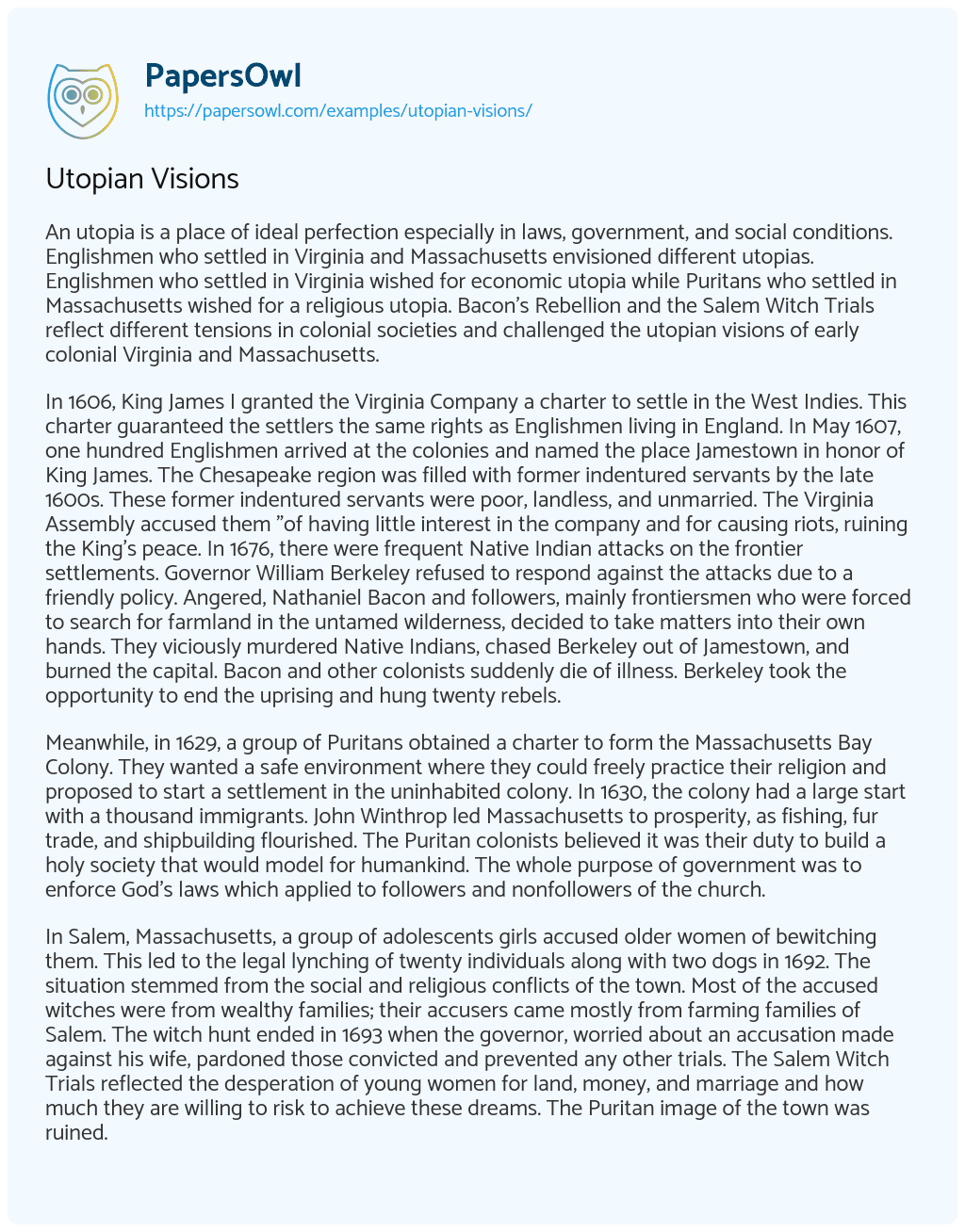 In 1606, King James I granted the Virginia Company a charter to settle in the West Indies. This charter guaranteed the settlers the same rights as Englishmen living in England. In May 1607, one hundred Englishmen arrived at the colonies and named the place Jamestown in honor of King James. The Chesapeake region was filled with former indentured servants by the late 1600s. These former indentured servants were poor, landless, and unmarried. The Virginia Assembly accused them “of having little interest in the company and for causing riots, ruining the King’s peace. In 1676, there were frequent Native Indian attacks on the frontier settlements. Governor William Berkeley refused to respond against the attacks due to a friendly policy. Angered, Nathaniel Bacon and followers, mainly frontiersmen who were forced to search for farmland in the untamed wilderness, decided to take matters into their own hands. They viciously murdered Native Indians, chased Berkeley out of Jamestown, and burned the capital. Bacon and other colonists suddenly die of illness. Berkeley took the opportunity to end the uprising and hung twenty rebels.

Meanwhile, in 1629, a group of Puritans obtained a charter to form the Massachusetts Bay Colony. They wanted a safe environment where they could freely practice their religion and proposed to start a settlement in the uninhabited colony. In 1630, the colony had a large start with a thousand immigrants. John Winthrop led Massachusetts to prosperity, as fishing, fur trade, and shipbuilding flourished. The Puritan colonists believed it was their duty to build a holy society that would model for humankind. The whole purpose of government was to enforce God’s laws which applied to followers and nonfollowers of the church.

In Salem, Massachusetts, a group of adolescents girls accused older women of bewitching them. This led to the legal lynching of twenty individuals along with two dogs in 1692. The situation stemmed from the social and religious conflicts of the town. Most of the accused witches were from wealthy families; their accusers came mostly from farming families of Salem. The witch hunt ended in 1693 when the governor, worried about an accusation made against his wife, pardoned those convicted and prevented any other trials. The Salem Witch Trials reflected the desperation of young women for land, money, and marriage and how much they are willing to risk to achieve these dreams. The Puritan image of the town was ruined.

Both Bacon’s Rebellion and the Salem Witch Trials show how unsuccessful early colonial Virginia and Massachusetts were in their attempts of a utopia due to greed and economic distress. Nathaniel Bacon and his fellow frontiersmen believe they were entitled to the right of land as Englishmen. When they could not obtain any, they turned to violence against Native Indians and Governor Berkeley. Additionally, in Salem, Massachusetts, Puritans, mainly young unmarried girls, were desperate and strived to expand their acreage. These girls realized the only way to steal land, money, and potential suitors from older wealthy widows was to get rid of them. Puritan society would condemn any sin small or large so they could not outright murder these women. Instead they accused them of witchcraft and signing with the devil. A perfect utopia is impossible because human nature is flawed and filled with greed.

A Start of the Salem Witch Trials

The Effects of Godliness and Worldliness in the Puritan Civilization

Unjust Power and Gender Relations in the Salem Witch Trials