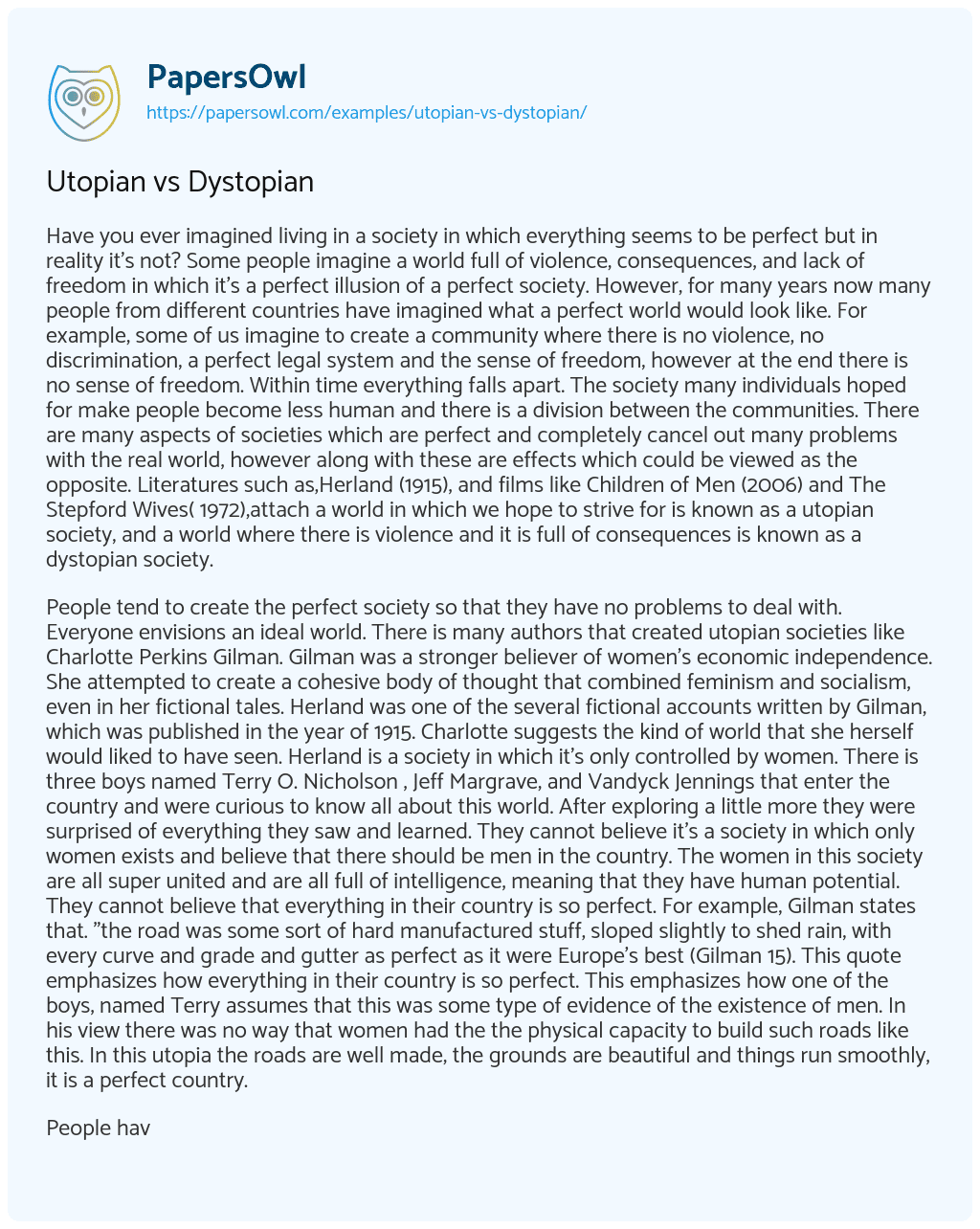 Have you ever imagined living in a society in which everything seems to be perfect but in reality it’s not? Some people imagine a world full of violence, consequences, and lack of freedom in which it’s a perfect illusion of a perfect society. However, for many years now many people from different countries have imagined what a perfect world would look like. For example, some of us imagine to create a community where there is no violence, no discrimination, a perfect legal system and the sense of freedom, however at the end there is no sense of freedom. Within time everything falls apart. The society many individuals hoped for make people become less human and there is a division between the communities. There are many aspects of societies which are perfect and completely cancel out many problems with the real world, however along with these are effects which could be viewed as the opposite. Literatures such as,Herland (1915), and films like Children of Men (2006) and The Stepford Wives( 1972),attach a world in which we hope to strive for is known as a utopian society, and a world where there is violence and it is full of consequences is known as a dystopian society.

People tend to create the perfect society so that they have no problems to deal with. Everyone envisions an ideal world. There is many authors that created utopian societies like Charlotte Perkins Gilman. Gilman was a stronger believer of women’s economic independence. She attempted to create a cohesive body of thought that combined feminism and socialism, even in her fictional tales. Herland was one of the several fictional accounts written by Gilman, which was published in the year of 1915. Charlotte suggests the kind of world that she herself would liked to have seen. Herland is a society in which it’s only controlled by women. There is three boys named Terry O. Nicholson , Jeff Margrave, and Vandyck Jennings that enter the country and were curious to know all about this world. After exploring a little more they were surprised of everything they saw and learned. They cannot believe it’s a society in which only women exists and believe that there should be men in the country. The women in this society are all super united and are all full of intelligence, meaning that they have human potential. They cannot believe that everything in their country is so perfect. For example, Gilman states that. “the road was some sort of hard manufactured stuff, sloped slightly to shed rain, with every curve and grade and gutter as perfect as it were Europe’s best (Gilman 15). This quote emphasizes how everything in their country is so perfect. This emphasizes how one of the boys, named Terry assumes that this was some type of evidence of the existence of men. In his view there was no way that women had the the physical capacity to build such roads like this. In this utopia the roads are well made, the grounds are beautiful and things run smoothly, it is a perfect country.

People have a huge desire in living the perfect life but in reality that’s not possible. The film, The Stepford Wives is a film that was published in the year of 1972 by Irvin Levin. The stepford Wives shows a couple named Joanna and Walt who are from New York, and the family moved to stepford Connecticut, a town in which men are known as the breadwinners and women accepting the roles of housewives, ready to attend their husbands desires. These characteristics created a perfect society which everyone is always happy at work and home. All of the women are housewives and they mold their lives according to their demands of their husbands and children. Families never get into major arguments in which they get out of control, in this case everyone is actually always happy. The men in this particular society created robots out of their wives in order to create what they desired which was perfect family where women followed all of their rules. These robot women did pretty much did everything together because they all have the same schedule everyday, basically everything around housekeeping. These women had all the time to bake and keep the house spotless. For example, as Bobby and Joanna encounter around Stepford, they seem extremely devoted to their housework and roles as wives and mothers. People tend to create utopian societies because there has been various groups that are struggling and under the pressure of many downfalls. Their desire to create a perfect world often lay in sharp contradiction to the world in which they live in. The tension between the individual and the community challenged older forms of living. This movie shows us that attempts at creating utopian societies fails because humanity is destroyed in the process. Everything is destroyed. There is no such thing as living a perfect life. Overall, this film shows us that people imagine of having a perfect world but in reality that’s not possible.

The film, Children of Men is a dystopian society, written by Alfonso Cuar??n, published in the year of 2006. This is an intense film in which it’s full of violence and grey skies. The film takes place in 2027, where two decades of human infertility have left society on the brink of collapse. Illegal immigrants seek sanctuary in the United Kingdom, where the last functioning government imposes oppressive immigration laws of refugees. The idea of this film is that no human beings have been born in the last 18 years, so when Theo, known as the main character meets, Kee an African American refugee who is pregnant, he has to protect her from the various groups who want to exploit her condition. Kee and other refugees move to the UK in hope that their lifestyles will change positively. Hope pretty much had all the characters moving forward. Their society has been plunged by climate change, pollution, nuclear accidents, social division and terrorist bombings. The government had control over the whole country. For example, immigrants were placed into cages, which made those individuals suffer, the military patrols the streets in numbers that seem to transcend the civilian population. This shows how people are being controlled by the government, in which they can not do anything to better the situation. It also emphasizes how freedom is restricted. This society is an illusion of a perfect utopian world. These dystopian societies are created because it’s a way to show the approaching society. Cuar??n pretty much created this dystopian society because it represented human regression in a way. The film rejects the idea of human history as progress, showing a future dark age predicated simply on our present day failures. All in all, Children of Men is a dystopian film that shows a violent society.

Utopian and Dystopian societies are created because since the dawn of time people have been imagining a perfect world. The technologies that individuals hope for back then is now present to them. Meaning the desire for something to better. Utopian societies are created because individuals tend to hide their problems and believe this can better the situation but in reality it does not. Although, Dystopian films are depressing authors create them because its a way to emphasize that there can possibly be a negative future. Meaning that there could be politicians and military people that are capable of doing awful things. This shows how dystopian societies are honest showing the worst case scenarios of the future.

Thomas More’s View on the Concept of a Utopian Society

A Utopian Society for One

Anthem and other Dystopian Novels