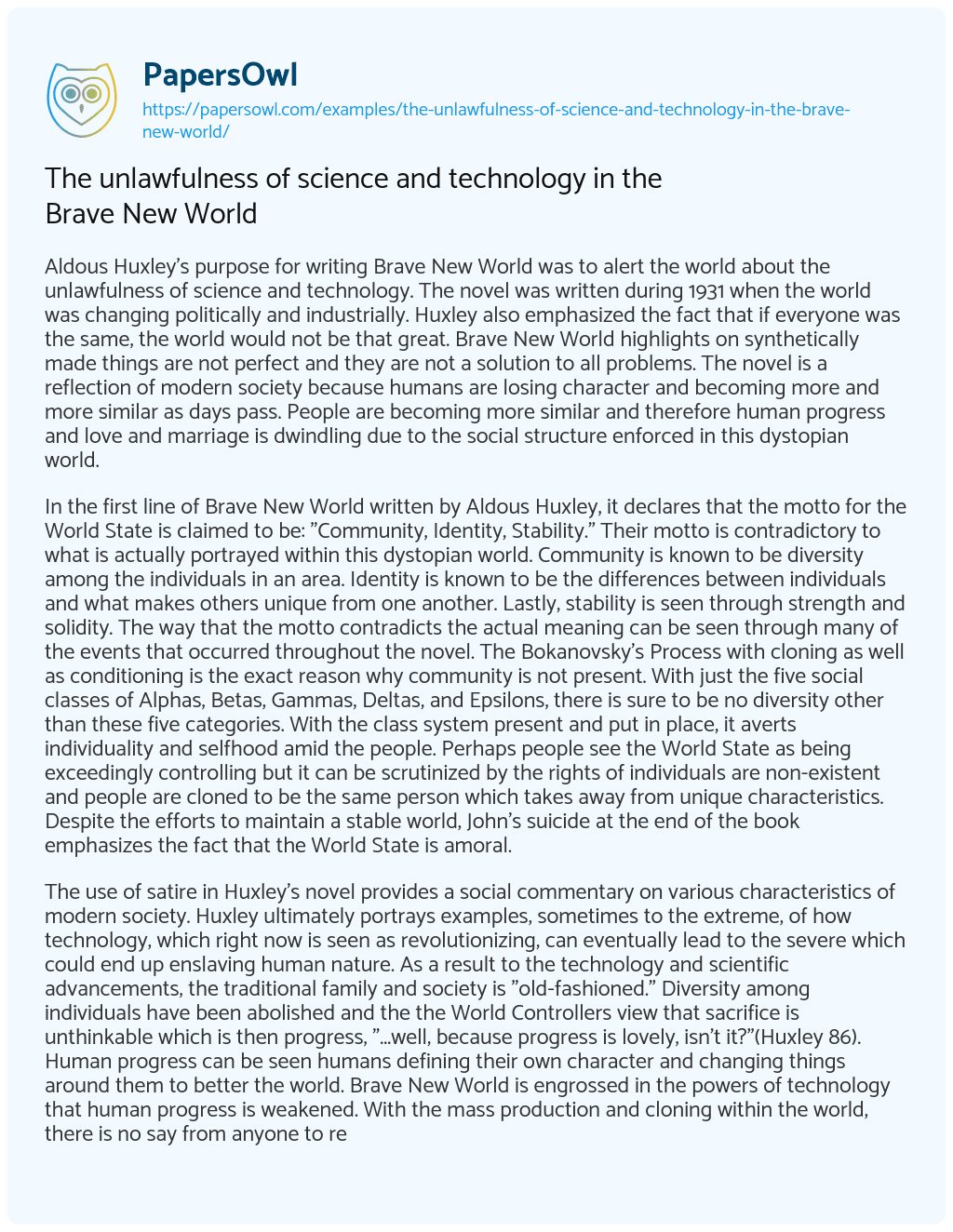 Aldous Huxley’s purpose for writing Brave New World was to alert the world about the unlawfulness of science and technology. The novel was written during 1931 when the world was changing politically and industrially. Huxley also emphasized the fact that if everyone was the same, the world would not be that great. Brave New World highlights on synthetically made things are not perfect and they are not a solution to all problems. The novel is a reflection of modern society because humans are losing character and becoming more and more similar as days pass. People are becoming more similar and therefore human progress and love and marriage is dwindling due to the social structure enforced in this dystopian world.

In the first line of Brave New World written by Aldous Huxley, it declares that the motto for the World State is claimed to be: “Community, Identity, Stability.” Their motto is contradictory to what is actually portrayed within this dystopian world. Community is known to be diversity among the individuals in an area. Identity is known to be the differences between individuals and what makes others unique from one another. Lastly, stability is seen through strength and solidity. The way that the motto contradicts the actual meaning can be seen through many of the events that occurred throughout the novel. The Bokanovsky’s Process with cloning as well as conditioning is the exact reason why community is not present. With just the five social classes of Alphas, Betas, Gammas, Deltas, and Epsilons, there is sure to be no diversity other than these five categories. With the class system present and put in place, it averts individuality and selfhood amid the people. Perhaps people see the World State as being exceedingly controlling but it can be scrutinized by the rights of individuals are non-existent and people are cloned to be the same person which takes away from unique characteristics. Despite the efforts to maintain a stable world, John’s suicide at the end of the book emphasizes the fact that the World State is amoral.

The use of satire in Huxley’s novel provides a social commentary on various characteristics of modern society. Huxley ultimately portrays examples, sometimes to the extreme, of how technology, which right now is seen as revolutionizing, can eventually lead to the severe which could end up enslaving human nature. As a result to the technology and scientific advancements, the traditional family and society is “old-fashioned.” Diversity among individuals have been abolished and the the World Controllers view that sacrifice is unthinkable which is then progress, “…well, because progress is lovely, isn’t it?”(Huxley 86). Human progress can be seen humans defining their own character and changing things around them to better the world. Brave New World is engrossed in the powers of technology that human progress is weakened. With the mass production and cloning within the world, there is no say from anyone to revolt against the means of life in this dystopian world. People are born to love mass production, soma, and sex. They are born into a society in which human progress can not thrive. Due to the technological advancements and the reduction of character, human progress is sure to be irrelevant to this world.

Brave New World illustrates a divergent way of being born and raised. Through the conditioning, family growth is absent in the fact that adults are “raised” to fit the progress that the World State desires. Unlike the world today where parents instil their values into their own children, the State decides how each child is developed. A way for the different classes to flourish, relationships of a father and mother to a child as become an irregular and unacceptable scheme. Due to the social structure, the “individuals” are governed to act only as a member of their class. Dating and marriage is forbidden in the world because it leads to monogamy and ultimately goes against the motto: Community, Identity, Stability. The goal of the World State is to value pleasure in replace of family values and education. The use of Soma is a favored drug for a quick and easy way to feel good. Soma is used to escape reality for a few hours or even for a few days. “A gramme in time saves nine”(Huxley 60). Since the conditioning, this slogan was drilled into individuals minds to help relieve pain and create a sense of happiness. Because of the heavy use of Soma in the world, individuals never know the stress and pain that comes along with supporting and raising children, nor do they see the joy. To sum up, dystopian governments view relationships and marriage as distractions to what they believe in and what laws they are trying to live by.

The unlawfulness of science and technology in the Brave New World. (2020, Apr 20). Retrieved from https://papersowl.com/examples/the-unlawfulness-of-science-and-technology-in-the-brave-new-world/