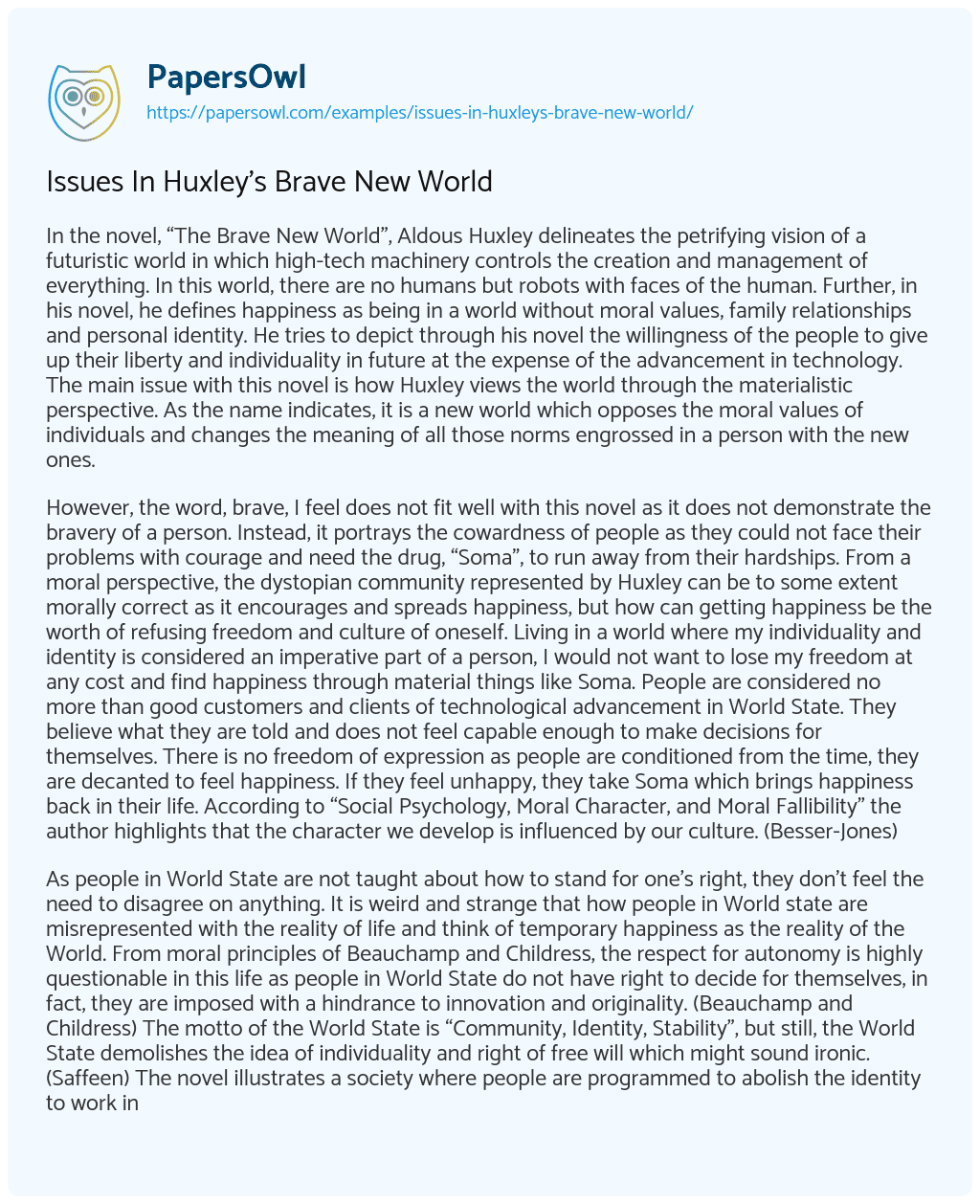 In the novel, “The Brave New World”, Aldous Huxley delineates the petrifying vision of a futuristic world in which high-tech machinery controls the creation and management of everything. In this world, there are no humans but robots with faces of the human. Further, in his novel, he defines happiness as being in a world without moral values, family relationships and personal identity. He tries to depict through his novel the willingness of the people to give up their liberty and individuality in future at the expense of the advancement in technology. The main issue with this novel is how Huxley views the world through the materialistic perspective. As the name indicates, it is a new world which opposes the moral values of individuals and changes the meaning of all those norms engrossed in a person with the new ones.

However, the word, brave, I feel does not fit well with this novel as it does not demonstrate the bravery of a person. Instead, it portrays the cowardness of people as they could not face their problems with courage and need the drug, “Soma”, to run away from their hardships. From a moral perspective, the dystopian community represented by Huxley can be to some extent morally correct as it encourages and spreads happiness, but how can getting happiness be the worth of refusing freedom and culture of oneself. Living in a world where my individuality and identity is considered an imperative part of a person, I would not want to lose my freedom at any cost and find happiness through material things like Soma. People are considered no more than good customers and clients of technological advancement in World State. They believe what they are told and does not feel capable enough to make decisions for themselves. There is no freedom of expression as people are conditioned from the time, they are decanted to feel happiness. If they feel unhappy, they take Soma which brings happiness back in their life. According to “Social Psychology, Moral Character, and Moral Fallibility” the author highlights that the character we develop is influenced by our culture. (Besser-Jones)

As people in World State are not taught about how to stand for one’s right, they don’t feel the need to disagree on anything. It is weird and strange that how people in World state are misrepresented with the reality of life and think of temporary happiness as the reality of the World. From moral principles of Beauchamp and Childress, the respect for autonomy is highly questionable in this life as people in World State do not have right to decide for themselves, in fact, they are imposed with a hindrance to innovation and originality. (Beauchamp and Childress) The motto of the World State is “Community, Identity, Stability”, but still, the World State demolishes the idea of individuality and right of free will which might sound ironic. (Saffeen) The novel illustrates a society where people are programmed to abolish the identity to work in a stable society. The stability of this society can be determined by the happiness and health of inhabitants, fearless nature towards death and lack of emotional attachment to people. In this society, individuality and distinctiveness of oneself is viewed as an obstacle in achieving happiness as it restricts the functioning of the World State. The controller of this state does whatever it takes to avert from inhabitants the ways of exploring their individuality.

However, I believe that identifying what type of person I am and distinguishing myself from others help me in pursuing the goal of my life. Without knowing my identity, I will be like a directionless boat floating in the sea. Thomas Aquinas, who is an influential philosopher, theologian, and jurist, once said, and I quote: “To one who has faith, no explanation is necessary. To one without faith, no explanation is possible.” According to the inhabitants of World State, they might not know the faith, religion and the God as they believe what controllers, who entail an independence of religion and God, tell them. These people, in the World State, are instructed to abhor the feeling of isolation so that they could not have time to believe in God and nature. It is the religion which interprets how we came in the world and why we are here, but how can the products of technology understand the importance of religion in the lives of human beings. People of World State belong to consumer-oriented culture and thus believe in technology than the existence of God and spirituality. In the article, “Ethical Issues in Genetic Engineering” the author explains that how through genetic engineering, people are playing with the concept of God and religion and thus religious leaders are expressing concerns about it. (Murray) I believe in faith and religion as sometimes it explains the unexplainable. How can a life where babies are created outside of the womb and trained to emphasize sexual contentment, consumerism and dedication to their stable community cannot be considered immoral? They are decanted in the state where ethics and concepts relating to religion and family are prohibited. (Dacre) The word “mother”, which is given so much privileged in this world, is considered indecent in World State as they are born in test tubes and have not experienced the love of a mother. It looks as if World State does not have a place for people with emotions and love and use a drug like soma to symbolize de-humanization and promiscuous pleasure.

Huxley shows through his novel how our future with technology can lead to a non-individualistic society which will be devoid of human feelings and sentiments, family and faith in religion. It is always viewed that development in science can improve the surrounding of humans and can lead to the state of perfection, but Huxley through this novel helps to look the technology through another perspective. Technological progress is the vision of the Brave New World. It emphasizes on commercialization and technological improvement and development, rather than the desire for love and family. (Miller) It renders a glance of how a world will become with the well-built machinery, controlling people and State. In the contemporary world, technology has become the dominant part of our lives – it prevents from sickness and diseases through medical advancements, however there is a need to consider that technology can also endanger the humanity like in World State.

Personally, I do not think I could best fit or even want to fit in a world where I am controlled by someone. I am proud of the relationships I have developed and want to cherish them for my rest of life. Emotions and attachment to close ones do not make me weak but strong from inside. They give me hope and encouragement in my bad times to conquer my obstacles. They are the reason for my true happiness, and thus I do not need a drug to find my happiness.