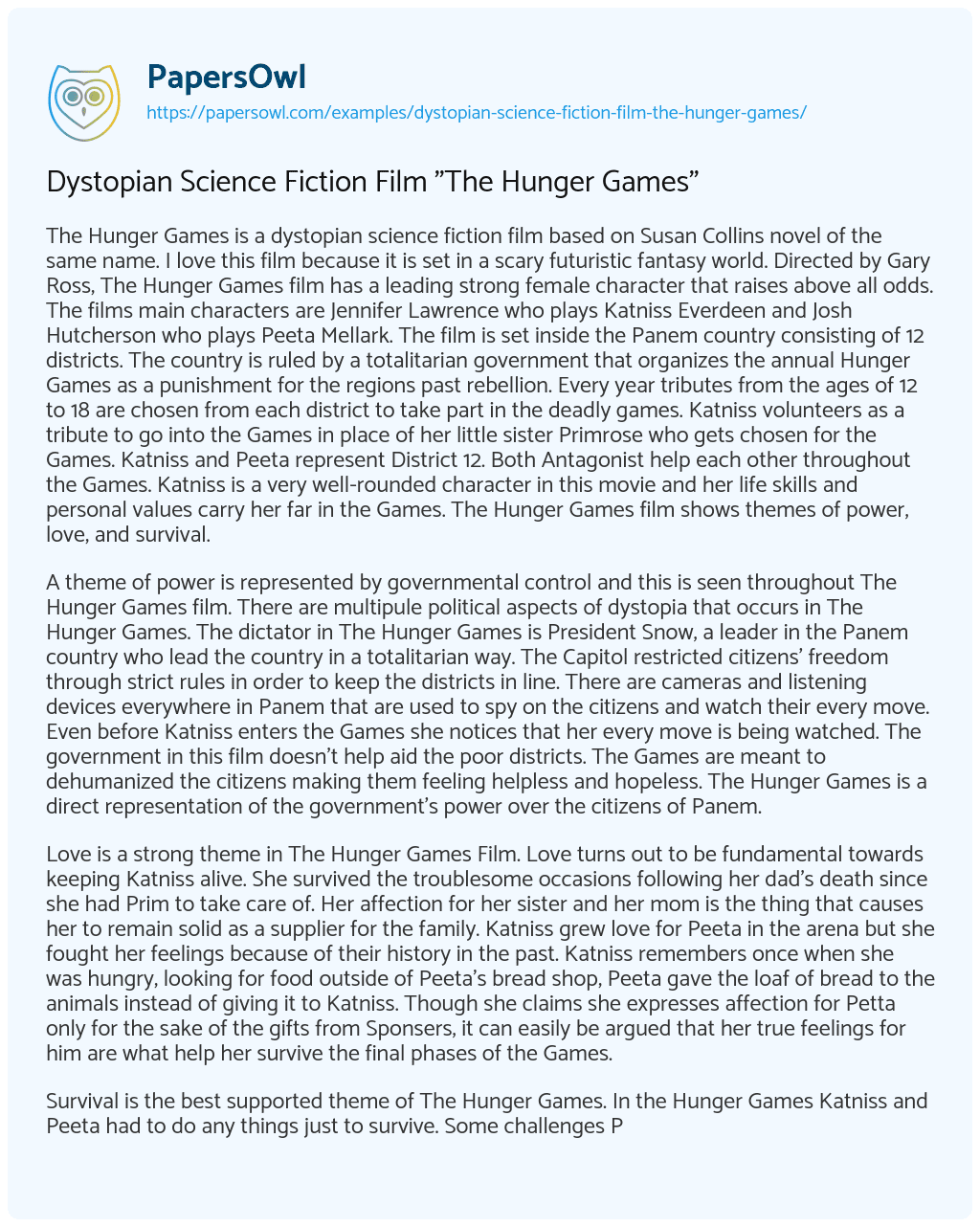 The Hunger Games is a dystopian science fiction film based on Susan Collins novel of the same name. I love this film because it is set in a scary futuristic fantasy world. Directed by Gary Ross, The Hunger Games film has a leading strong female character that raises above all odds. The films main characters are Jennifer Lawrence who plays Katniss Everdeen and Josh Hutcherson who plays Peeta Mellark. The film is set inside the Panem country consisting of 12 districts. The country is ruled by a totalitarian government that organizes the annual Hunger Games as a punishment for the regions past rebellion. Every year tributes from the ages of 12 to 18 are chosen from each district to take part in the deadly games. Katniss volunteers as a tribute to go into the Games in place of her little sister Primrose who gets chosen for the Games. Katniss and Peeta represent District 12. Both Antagonist help each other throughout the Games. Katniss is a very well-rounded character in this movie and her life skills and personal values carry her far in the Games. The Hunger Games film shows themes of power, love, and survival.

A theme of power is represented by governmental control and this is seen throughout The Hunger Games film. There are multipule political aspects of dystopia that occurs in The Hunger Games. The dictator in The Hunger Games is President Snow, a leader in the Panem country who lead the country in a totalitarian way. The Capitol restricted citizens’ freedom through strict rules in order to keep the districts in line. There are cameras and listening devices everywhere in Panem that are used to spy on the citizens and watch their every move. Even before Katniss enters the Games she notices that her every move is being watched. The government in this film doesn’t help aid the poor districts. The Games are meant to dehumanized the citizens making them feeling helpless and hopeless. The Hunger Games is a direct representation of the government’s power over the citizens of Panem.

Love is a strong theme in The Hunger Games Film. Love turns out to be fundamental towards keeping Katniss alive. She survived the troublesome occasions following her dad’s death since she had Prim to take care of. Her affection for her sister and her mom is the thing that causes her to remain solid as a supplier for the family. Katniss grew love for Peeta in the arena but she fought her feelings because of their history in the past. Katniss remembers once when she was hungry, looking for food outside of Peeta’s bread shop, Peeta gave the loaf of bread to the animals instead of giving it to Katniss. Though she claims she expresses affection for Petta only for the sake of the gifts from Sponsers, it can easily be argued that her true feelings for him are what help her survive the final phases of the Games.

The Hunger Games is a film that how people enjoy the killing of innocence children. In the film children are forced to participate in the Hunger Games and if their not physically skilled it is a great chance that they will end up dead. This film degrades the citizens while treating them like prisoners under the strict Capital . The film is distubing and it promotes pointless violence. The Hunger Games should not be watched by people under age 18 because of the violent theme it portrays.

In conclusion The Hunger Games film portrays themes of power , love, and survival. This is also a story that reflects how a someone can come from absolutly nothing and become someone great no matter what the challenges are . In this flim the government is absoutly controlling and the poor citizens are treated lesser the wealthy citizens. In the film Katniss and Peeta won the Hunger Games because they stuck together. Overall, The Hunger Games is an interesting film that deals with the future prospects of life while including poverty and governmental control issues.

Character Profile for Katniss Everdeen in “The Hunger Games”