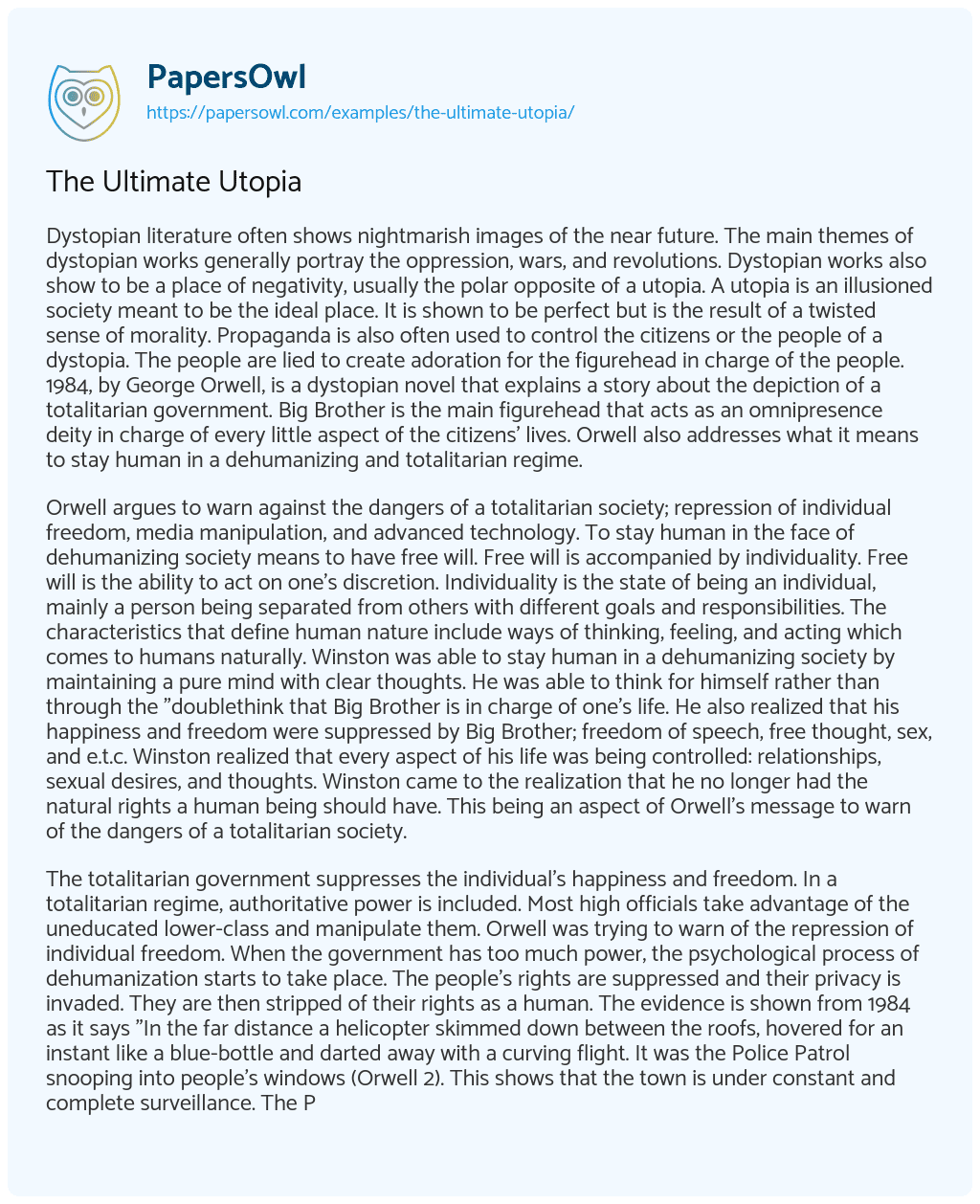 Dystopian literature often shows nightmarish images of the near future. The main themes of dystopian works generally portray the oppression, wars, and revolutions. Dystopian works also show to be a place of negativity, usually the polar opposite of a utopia. A utopia is an illusioned society meant to be the ideal place. It is shown to be perfect but is the result of a twisted sense of morality. Propaganda is also often used to control the citizens or the people of a dystopia. The people are lied to create adoration for the figurehead in charge of the people. 1984, by George Orwell, is a dystopian novel that explains a story about the depiction of a totalitarian government. Big Brother is the main figurehead that acts as an omnipresence deity in charge of every little aspect of the citizens’ lives. Orwell also addresses what it means to stay human in a dehumanizing and totalitarian regime.

Orwell argues to warn against the dangers of a totalitarian society; repression of individual freedom, media manipulation, and advanced technology. To stay human in the face of dehumanizing society means to have free will. Free will is accompanied by individuality. Free will is the ability to act on one’s discretion. Individuality is the state of being an individual, mainly a person being separated from others with different goals and responsibilities. The characteristics that define human nature include ways of thinking, feeling, and acting which comes to humans naturally. Winston was able to stay human in a dehumanizing society by maintaining a pure mind with clear thoughts. He was able to think for himself rather than through the “doublethink that Big Brother is in charge of one’s life. He also realized that his happiness and freedom were suppressed by Big Brother; freedom of speech, free thought, sex, and e.t.c. Winston realized that every aspect of his life was being controlled: relationships, sexual desires, and thoughts. Winston came to the realization that he no longer had the natural rights a human being should have. This being an aspect of Orwell’s message to warn of the dangers of a totalitarian society.

The totalitarian government suppresses the individual’s happiness and freedom. In a totalitarian regime, authoritative power is included. Most high officials take advantage of the uneducated lower-class and manipulate them. Orwell was trying to warn of the repression of individual freedom. When the government has too much power, the psychological process of dehumanization starts to take place. The people’s rights are suppressed and their privacy is invaded. They are then stripped of their rights as a human. The evidence is shown from 1984 as it says “In the far distance a helicopter skimmed down between the roofs, hovered for an instant like a blue-bottle and darted away with a curving flight. It was the Police Patrol snooping into people’s windows (Orwell 2). This shows that the town is under constant and complete surveillance. The Police Patrol snoop into people’s windows to check if they are having sexual intercourse to promote arts. The town seems to be on a lock-down and shows that regardless of the location, everyone is being watched. In a totalitarian regime, nearly every aspect of public and private behavior is regulated. In addition to the regulations, the people’s thoughts are also kept in track. The evidence is shown as it says, “It was terribly dangerous to let your thoughts wander when you were in any public place or within range of a telescreen. The smallest thing could give you away. A nervous tic, an unconscious look of anxiety, a habit of muttering to yourself anything that carried with it the suggestion of abnormality, of having something to hide (Orwell 65).

Orwell believes that the future of society could relate to that of a slave society where everything is constantly living as a slave under authoritative power and totalitarianism. The dangers of a totalitarian government restrict the people of their rights. Media manipulation is one technique used to influence the thoughts of others through the media in favor of one’s side. Orwell was trying to warn of the media manipulation used in 1984. Propaganda is in relation to media manipulation. Propaganda is biased information used to further an agenda. In 1984, Orwell shows the warning of media manipulation as it says, “Statistics were just as much a fantasy in their original version as in their rectified version (Orwell 41). Winston is a member of the Outer Party working for the Ministry of Truth. The Ministry of Truth is the ministry of propaganda. As with the other ministries in the novel, the ministry of truth is actually a misnomer; it’s the opposite of the actual term. The party uses false information and propagates it to convince its members that Big Brother is never wrong. Propaganda was also used to create adoration for Big Brother. This propaganda controlled the citizen’s actions because it stated that big brother would always be watching you. The evidence is shown as it says, “It was one of those pictures which are so contrived that the eyes follow you about when you move. BIG BROTHER IS WATCHING YOU, the caption beneath it ran (Orwell 1-2). The poster had been used as propaganda to keep the citizens in place and to instill fear into them. As it conveys a series of propaganda, it means that the citizens have to follow what the dictatorial government wants, and if they do not, big brother is spying on them to keep in touch. Advanced technology is technology beyond one’s current time. Orwell was trying to warn of the dangers of a totalitarian government; advanced technology. In the setting of 1984, the role of technology allows the governments to monitor and control every aspect of its citizens’ lives.

The Watchful Eyes of our Government