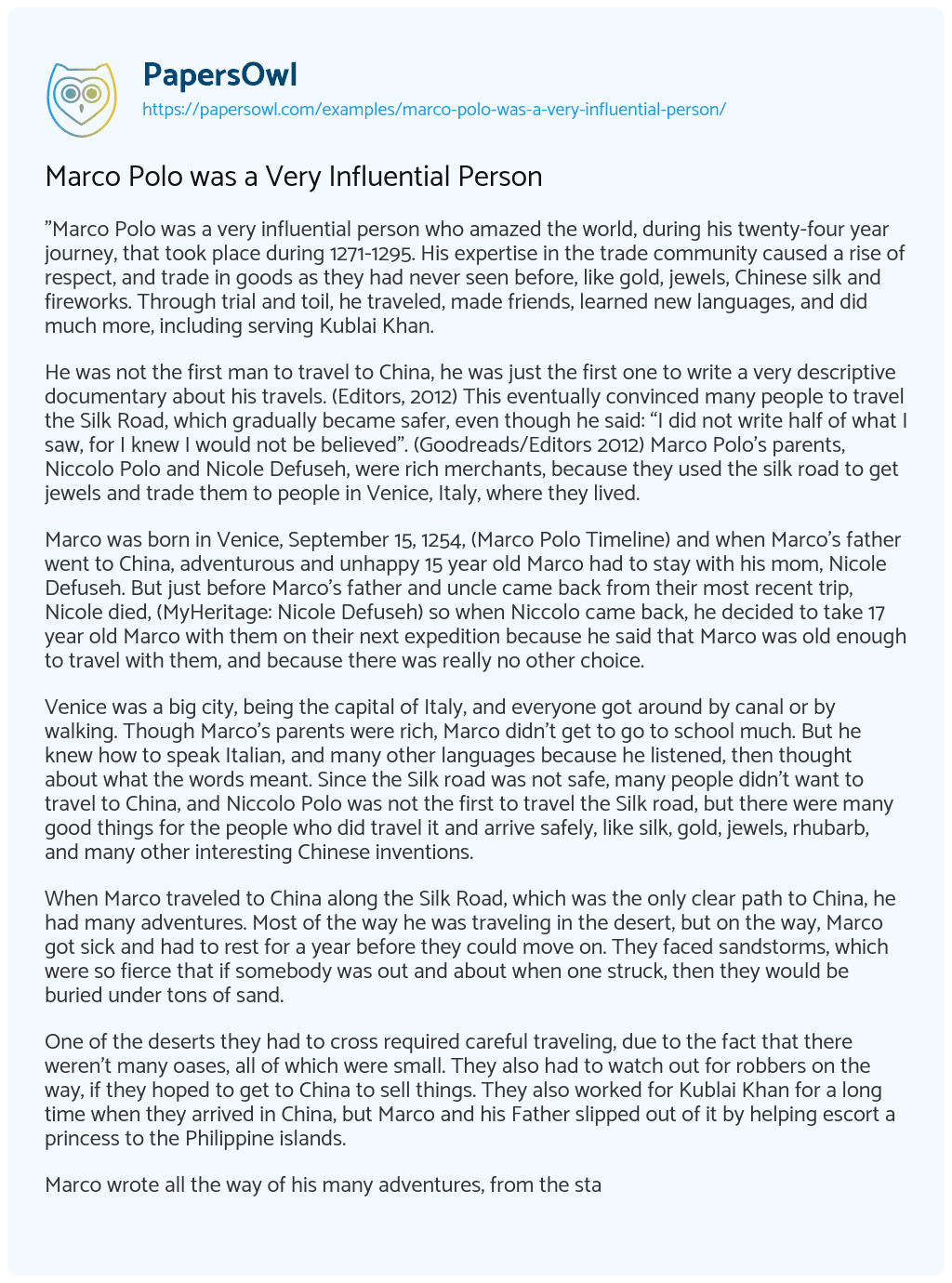 “Marco Polo was a very influential person who amazed the world, during his twenty-four year journey, that took place during 1271-1295. His expertise in the trade community caused a rise of respect, and trade in goods as they had never seen before, like gold, jewels, Chinese silk and fireworks. Through trial and toil, he traveled, made friends, learned new languages, and did much more, including serving Kublai Khan.

He was not the first man to travel to China, he was just the first one to write a very descriptive documentary about his travels. (Editors, 2012) This eventually convinced many people to travel the Silk Road, which gradually became safer, even though he said: “I did not write half of what I saw, for I knew I would not be believed”. (Goodreads/Editors 2012) Marco Polo’s parents, Niccolo Polo and Nicole Defuseh, were rich merchants, because they used the silk road to get jewels and trade them to people in Venice, Italy, where they lived.

Marco was born in Venice, September 15, 1254, (Marco Polo Timeline) and when Marco’s father went to China, adventurous and unhappy 15 year old Marco had to stay with his mom, Nicole Defuseh. But just before Marco’s father and uncle came back from their most recent trip, Nicole died, (MyHeritage: Nicole Defuseh) so when Niccolo came back, he decided to take 17 year old Marco with them on their next expedition because he said that Marco was old enough to travel with them, and because there was really no other choice.

Venice was a big city, being the capital of Italy, and everyone got around by canal or by walking. Though Marco’s parents were rich, Marco didn’t get to go to school much. But he knew how to speak Italian, and many other languages because he listened, then thought about what the words meant. Since the Silk road was not safe, many people didn’t want to travel to China, and Niccolo Polo was not the first to travel the Silk road, but there were many good things for the people who did travel it and arrive safely, like silk, gold, jewels, rhubarb, and many other interesting Chinese inventions.

When Marco traveled to China along the Silk Road, which was the only clear path to China, he had many adventures. Most of the way he was traveling in the desert, but on the way, Marco got sick and had to rest for a year before they could move on. They faced sandstorms, which were so fierce that if somebody was out and about when one struck, then they would be buried under tons of sand.

One of the deserts they had to cross required careful traveling, due to the fact that there weren’t many oases, all of which were small. They also had to watch out for robbers on the way, if they hoped to get to China to sell things. They also worked for Kublai Khan for a long time when they arrived in China, but Marco and his Father slipped out of it by helping escort a princess to the Philippine islands.

Marco wrote all the way of his many adventures, from the start of the journey to China and on the way back. Kublai Khan also treated his subjects and everybody else under his rule very well, and let them follow what religion they wished, and they had good homes, and fires, and plenty of food. Even then, some Chinese people were still unhappy with his rule, and wanted a Chinese ruler, so they could be independent.

They traded their things for Chinese inventions, like fireworks, silk, eyeglasses, and the first paper money seen! They also traded for gold and jewels. Marco figured people wouldn’t believe him, and when he came back, Marco heavily impacted Venice’s society, though it took time. And when Marco and Niccolo arrived, their relatives were all like, you can’t be our relatives, because Marco and Niccolo are dead because they’ve been gone for like, over 24 years or so, now shoo! Go away beggars!

Marco and Niccolo were desperate, so they had to rip open the seams of their clothes, in which they had craftily sowen gems into, so they wouldn’t be suspected of having them if they were attacked by bandits and robbed.So they convinced their relatives to let them in with that. Then they lived in peace for a time. Then a war erupted between Marco’s people and the nearby land of Genoa made him a captain, but he got taken prisoner during a skirmish.

But when he and his cellmate, Rustichello da Pisa, got out from a peace treaty, Mr. Pisa published Marco’s stories. They eventually emboldened more people to travel towards China, while Kublai Khan was making the journey safer for people by stationing guards along the road to protect it from bandits, and Venice and the rest of Italy was wealthy.

Even though many things Marco did didn’t seem like much, it still changed the world in many ways, both now, and back then. People became more bold, and started traveling the Silk Road, and more goods came to Italy. Marco was an amazing man with lots of energy and endurance, needed for the hot and harshness of the desert who changed history forever. So to conclude the story, Marco was a young boy longing to travel with his father to China. When he did, they faced many dangers and hardships.

They went through many deserts, encountered sandstorms, and many other things before they arrived in China. They also had to go around and uprising of angry Chinese, who weren’t happy with the way Kublai Khan was ruling. When they traveled through Chinese villages, there were many amazing Chinese inventions, like fireworks and silk. They served Kublai Khan for many a year, 1274-1292 to be exact, then they managed to get their freedom by escorting a princess to marry a noble in the Philippines, who turned out to be dead, then they traveled back and had to convince their relatives with gems to let them in.

From what i’ve gathered, it is possible that the journeys of Marco could have been caused either by chance, or by fate. It isn’t said how Marco’s mom died, so maybe the travels were meant to happen, to change the world. This is just my personal opinion to what might have happened.

“In Polo’s day and even today, there has been some doubt about whether Polo really went to China. However, most experts agree that he did indeed make the journey.” (Livescience.com)

“Christopher Columbus purportedly sailed to the New World with a copy of Marco Polo’s ‘Travels’ in tow. Thinking he would reach Asia and having no idea about the Mongol Empire’s collapse, Columbus marked up the book with notes in preparation for a meeting with Kublai Khan’s descendent.” (Editors 2012) Columbus did this because he hoped to get riches like people who went to China did, but he didn’t figure on discovering new land in the way…But he mistakenly thought that the land he found was Aisa, but when Columbus saw it wasn’t, he was determined to get through what is now the Panama Canal.”

Who is the most Influential Person in my Life

Why is Mozart so Influential?

Bob Marley as the most Influential Artists