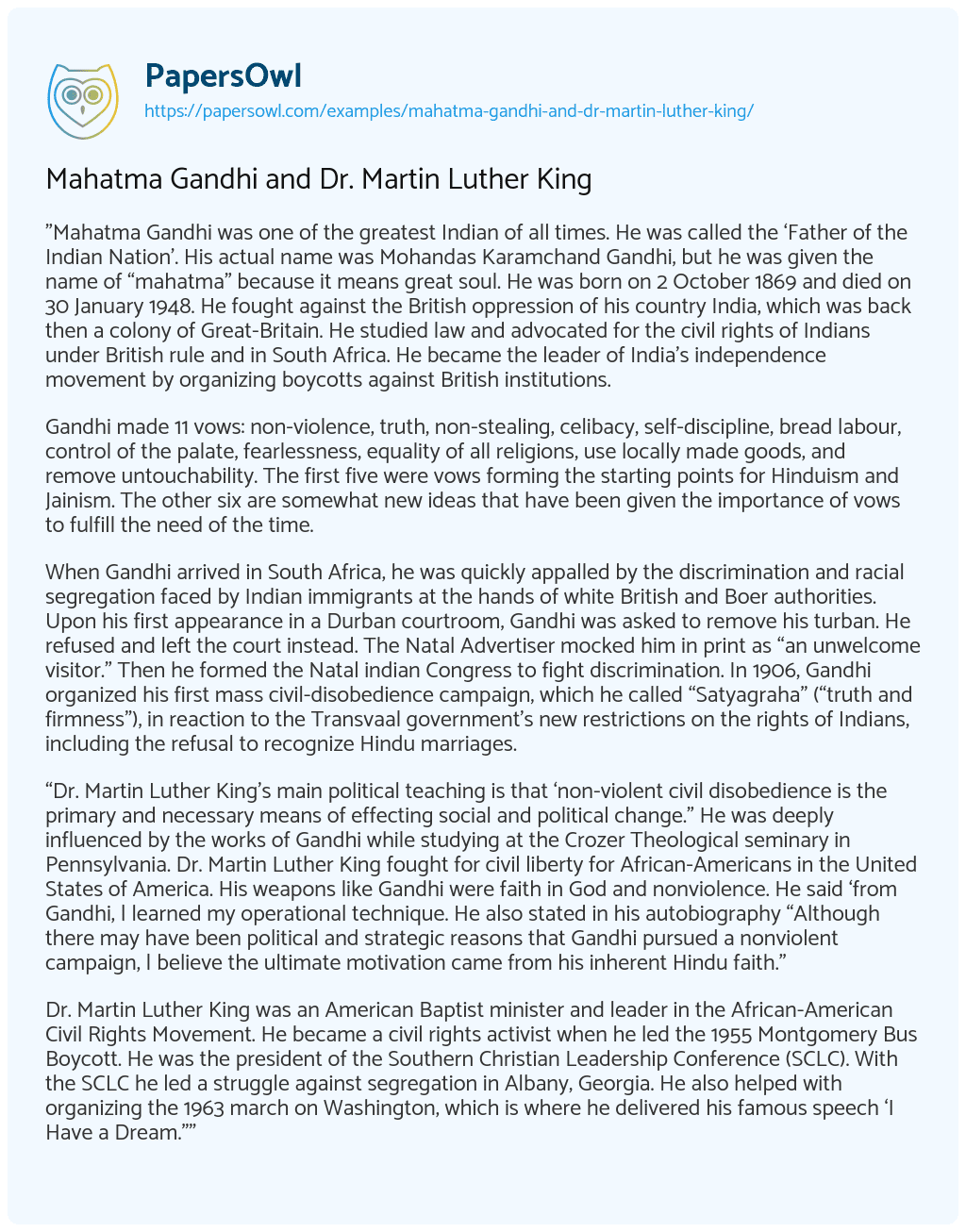 “Mahatma Gandhi was one of the greatest Indian of all times. He was called the ‘Father of the Indian Nation’. His actual name was Mohandas Karamchand Gandhi, but he was given the name of “mahatma” because it means great soul. He was born on 2 October 1869 and died on 30 January 1948. He fought against the British oppression of his country India, which was back then a colony of Great-Britain. He studied law and advocated for the civil rights of Indians under British rule and in South Africa. He became the leader of India’s independence movement by organizing boycotts against British institutions.

Gandhi made 11 vows: non-violence, truth, non-stealing, celibacy, self-discipline, bread labour, control of the palate, fearlessness, equality of all religions, use locally made goods, and remove untouchability. The first five were vows forming the starting points for Hinduism and Jainism. The other six are somewhat new ideas that have been given the importance of vows to fulfill the need of the time.

When Gandhi arrived in South Africa, he was quickly appalled by the discrimination and racial segregation faced by Indian immigrants at the hands of white British and Boer authorities. Upon his first appearance in a Durban courtroom, Gandhi was asked to remove his turban. He refused and left the court instead. The Natal Advertiser mocked him in print as “an unwelcome visitor.” Then he formed the Natal indian Congress to fight discrimination. In 1906, Gandhi organized his first mass civil-disobedience campaign, which he called “Satyagraha” (“truth and firmness”), in reaction to the Transvaal government’s new restrictions on the rights of Indians, including the refusal to recognize Hindu marriages.

“Dr. Martin Luther King’s main political teaching is that ‘non-violent civil disobedience is the primary and necessary means of effecting social and political change.” He was deeply influenced by the works of Gandhi while studying at the Crozer Theological seminary in Pennsylvania. Dr. Martin Luther King fought for civil liberty for African-Americans in the United States of America. His weapons like Gandhi were faith in God and nonviolence. He said ‘from Gandhi, | learned my operational technique. He also stated in his autobiography “Although there may have been political and strategic reasons that Gandhi pursued a nonviolent campaign, | believe the ultimate motivation came from his inherent Hindu faith.”

Dr. Martin Luther King was an American Baptist minister and leader in the African-American Civil Rights Movement. He became a civil rights activist when he led the 1955 Montgomery Bus Boycott. He was the president of the Southern Christian Leadership Conference (SCLC). With the SCLC he led a struggle against segregation in Albany, Georgia. He also helped with organizing the 1963 march on Washington, which is where he delivered his famous speech ‘I Have a Dream.””