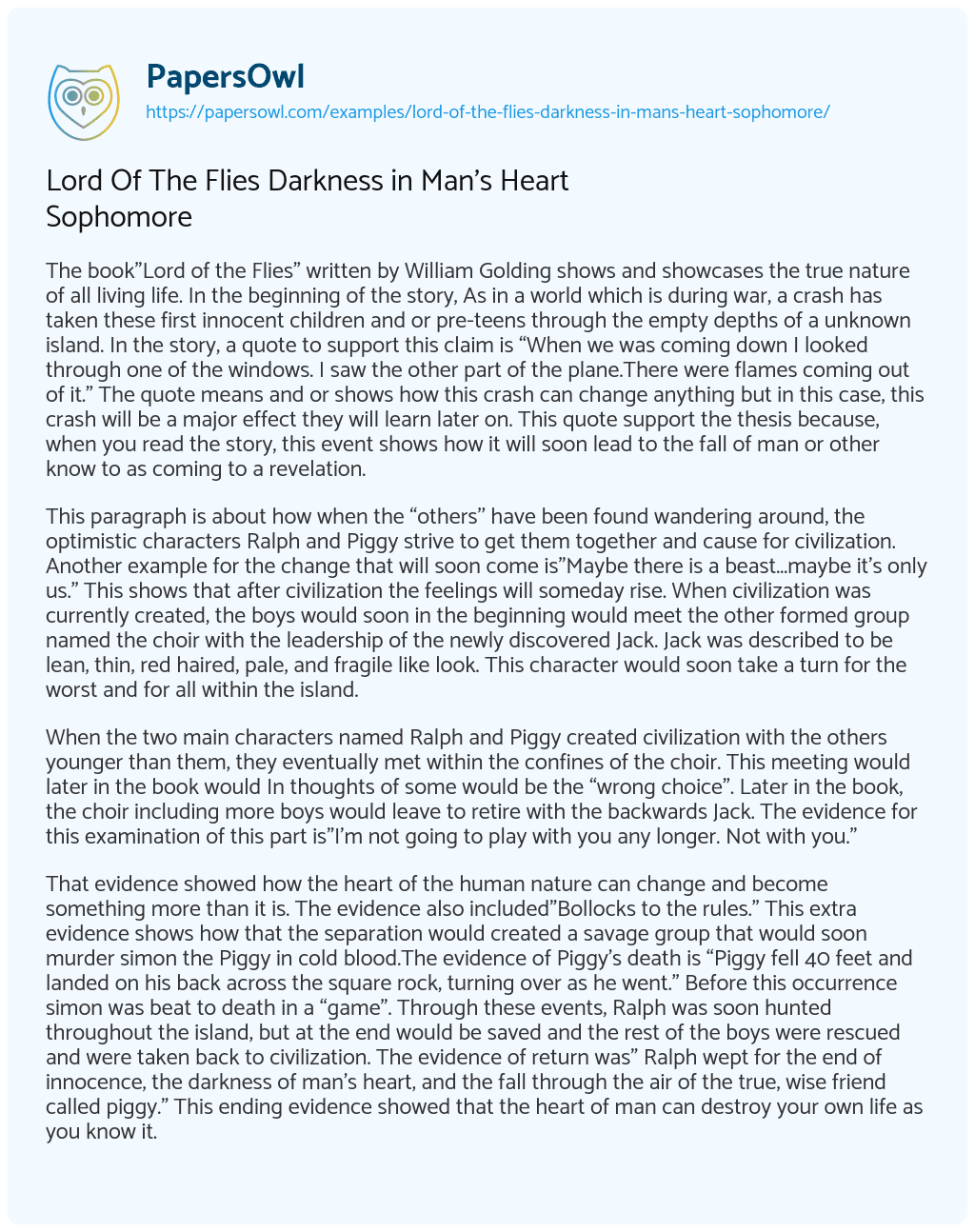 The book”Lord of the Flies” written by William Golding shows and showcases the true nature of all living life. In the beginning of the story, As in a world which is during war, a crash has taken these first innocent children and or pre-teens through the empty depths of a unknown island. In the story, a quote to support this claim is “When we was coming down I looked through one of the windows. I saw the other part of the plane.There were flames coming out of it.” The quote means and or shows how this crash can change anything but in this case, this crash will be a major effect they will learn later on. This quote support the thesis because, when you read the story, this event shows how it will soon lead to the fall of man or other know to as coming to a revelation.

This paragraph is about how when the “others’’ have been found wandering around, the optimistic characters Ralph and Piggy strive to get them together and cause for civilization. Another example for the change that will soon come is”Maybe there is a beast…maybe it’s only us.” This shows that after civilization the feelings will someday rise. When civilization was currently created, the boys would soon in the beginning would meet the other formed group named the choir with the leadership of the newly discovered Jack. Jack was described to be lean, thin, red haired, pale, and fragile like look. This character would soon take a turn for the worst and for all within the island.

When the two main characters named Ralph and Piggy created civilization with the others younger than them, they eventually met within the confines of the choir. This meeting would later in the book would In thoughts of some would be the “wrong choice”. Later in the book, the choir including more boys would leave to retire with the backwards Jack. The evidence for this examination of this part is”I’m not going to play with you any longer. Not with you.”

That evidence showed how the heart of the human nature can change and become something more than it is. The evidence also included”Bollocks to the rules.” This extra evidence shows how that the separation would created a savage group that would soon murder simon the Piggy in cold blood.The evidence of Piggy’s death is “Piggy fell 40 feet and landed on his back across the square rock, turning over as he went.” Before this occurrence simon was beat to death in a “game”. Through these events, Ralph was soon hunted throughout the island, but at the end would be saved and the rest of the boys were rescued and were taken back to civilization. The evidence of return was” Ralph wept for the end of innocence, the darkness of man’s heart, and the fall through the air of the true, wise friend called piggy.” This ending evidence showed that the heart of man can destroy your own life as you know it.

Lord Of The Flies Darkness in Man's Heart Sophomore. (2022, Feb 07). Retrieved from https://papersowl.com/examples/lord-of-the-flies-darkness-in-mans-heart-sophomore/

Adventures, Conflicts, and Struggles in “Lord of the Flies”

Lord of the Flies: Leadership

Lord of the Flies Loss of Innocence

Civilization, Power and Moral Consequences in Lord of the Flies