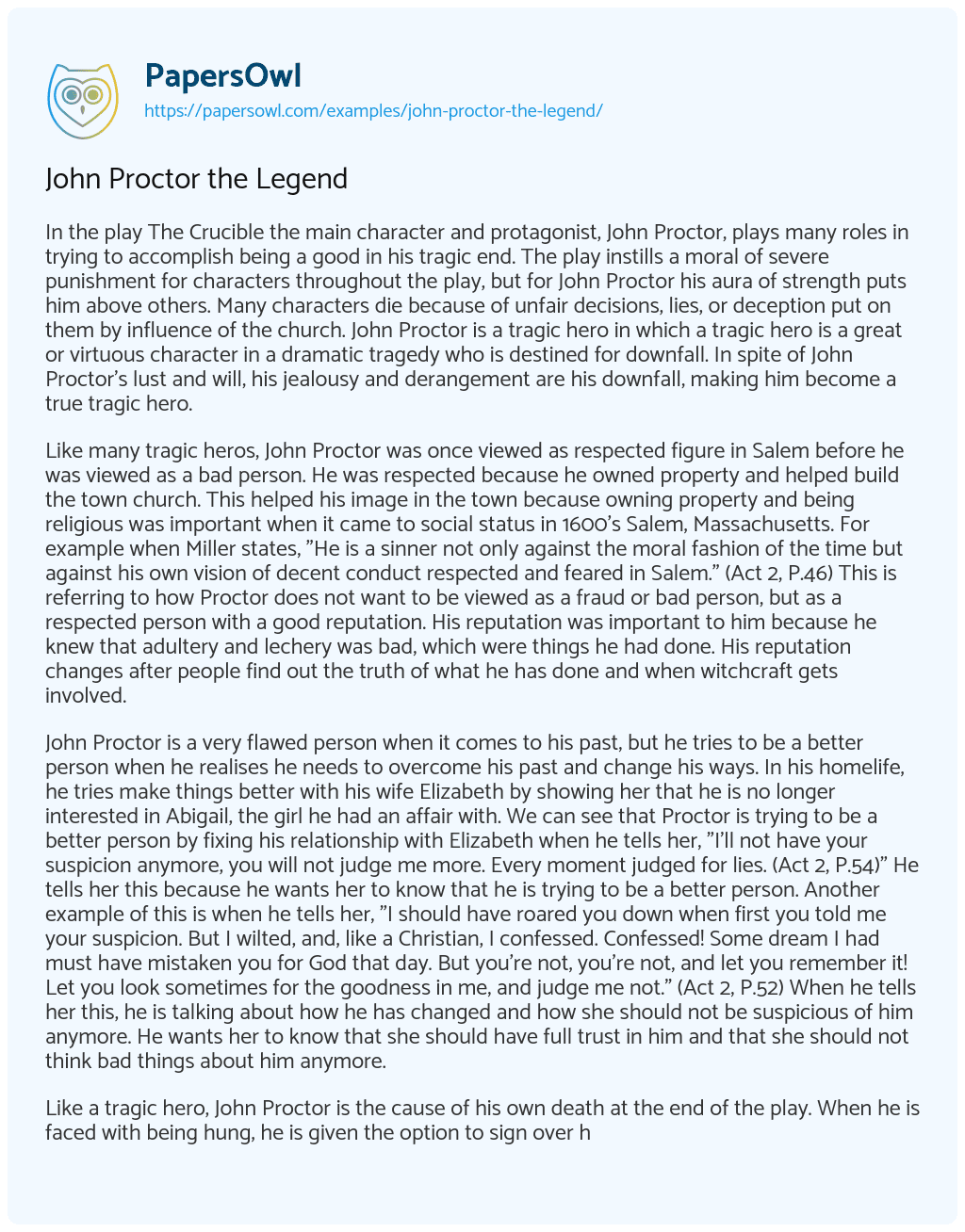 In the play The Crucible the main character and protagonist, John Proctor, plays many roles in trying to accomplish being a good in his tragic end. The play instills a moral of severe punishment for characters throughout the play, but for John Proctor his aura of strength puts him above others. Many characters die because of unfair decisions, lies, or deception put on them by influence of the church. John Proctor is a tragic hero in which a tragic hero is a great or virtuous character in a dramatic tragedy who is destined for downfall. In spite of John Proctor’s lust and will, his jealousy and derangement are his downfall, making him become a true tragic hero.

Like many tragic heros, John Proctor was once viewed as respected figure in Salem before he was viewed as a bad person. He was respected because he owned property and helped build the town church. This helped his image in the town because owning property and being religious was important when it came to social status in 1600’s Salem, Massachusetts. For example when Miller states, “He is a sinner not only against the moral fashion of the time but against his own vision of decent conduct respected and feared in Salem.” (Act 2, P.46) This is referring to how Proctor does not want to be viewed as a fraud or bad person, but as a respected person with a good reputation. His reputation was important to him because he knew that adultery and lechery was bad, which were things he had done. His reputation changes after people find out the truth of what he has done and when witchcraft gets involved.

John Proctor is a very flawed person when it comes to his past, but he tries to be a better person when he realises he needs to overcome his past and change his ways. In his homelife, he tries make things better with his wife Elizabeth by showing her that he is no longer interested in Abigail, the girl he had an affair with. We can see that Proctor is trying to be a better person by fixing his relationship with Elizabeth when he tells her, “I’ll not have your suspicion anymore, you will not judge me more. Every moment judged for lies. (Act 2, P.54)” He tells her this because he wants her to know that he is trying to be a better person. Another example of this is when he tells her, “I should have roared you down when first you told me your suspicion. But I wilted, and, like a Christian, I confessed. Confessed! Some dream I had must have mistaken you for God that day. But you’re not, you’re not, and let you remember it! Let you look sometimes for the goodness in me, and judge me not.” (Act 2, P.52) When he tells her this, he is talking about how he has changed and how she should not be suspicious of him anymore. He wants her to know that she should have full trust in him and that she should not think bad things about him anymore.

Like a tragic hero, John Proctor is the cause of his own death at the end of the play. When he is faced with being hung, he is given the option to sign over his name to show that he is confessing everything that happened with the witchcraft accusations. He is told by Judge Hathorne and Reverend Parris that his name will be put on the church door to show that he is confessing to witchcraft and no longer lying. He does not want his name to be signed over because in the end, his name was all he had left. He knows that if he does not sign over his name, he will be hung, but he would rather keep his name and know that God knows his truth instead of the people of Salem. For example when Proctor says, “Because it is my name! Because I cannot have another in my life! Because I lie and sign myself to lies! Because I am not worth the dust on the feet of them that hang! How may I live without my name? I have given my soul; leave my name!” (Act 4, P.133) This is his final thought on what he thinks should happen, he would rather die and be defeated with his name than without it.

Overall, John Proctor’s characteristics show that he was both a good and bad person and that he was flawed. He is also the cause of his own death, showing that at the end of the play he was defeated by himself and those around him. These things make him a true tragic hero because of how he chose to carry things out in the end.