John Proctor a One Man Show 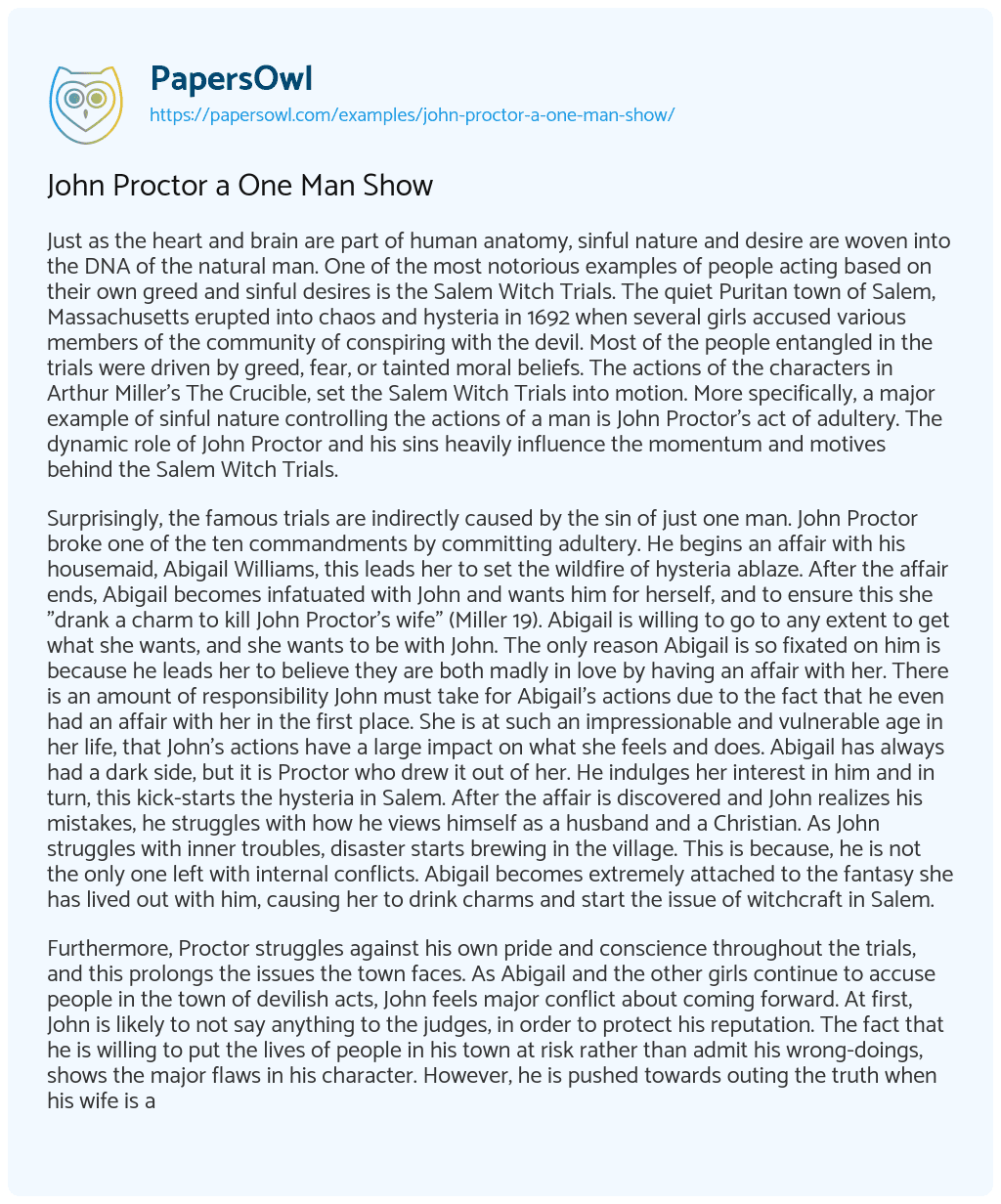 Just as the heart and brain are part of human anatomy, sinful nature and desire are woven into the DNA of the natural man. One of the most notorious examples of people acting based on their own greed and sinful desires is the Salem Witch Trials. The quiet Puritan town of Salem, Massachusetts erupted into chaos and hysteria in 1692 when several girls accused various members of the community of conspiring with the devil. Most of the people entangled in the trials were driven by greed, fear, or tainted moral beliefs. The actions of the characters in Arthur Miller’s The Crucible, set the Salem Witch Trials into motion. More specifically, a major example of sinful nature controlling the actions of a man is John Proctor’s act of adultery. The dynamic role of John Proctor and his sins heavily influence the momentum and motives behind the Salem Witch Trials.

Surprisingly, the famous trials are indirectly caused by the sin of just one man. John Proctor broke one of the ten commandments by committing adultery. He begins an affair with his housemaid, Abigail Williams, this leads her to set the wildfire of hysteria ablaze. After the affair ends, Abigail becomes infatuated with John and wants him for herself, and to ensure this she “drank a charm to kill John Proctor’s wife” (Miller 19). Abigail is willing to go to any extent to get what she wants, and she wants to be with John. The only reason Abigail is so fixated on him is because he leads her to believe they are both madly in love by having an affair with her. There is an amount of responsibility John must take for Abigail’s actions due to the fact that he even had an affair with her in the first place. She is at such an impressionable and vulnerable age in her life, that John’s actions have a large impact on what she feels and does. Abigail has always had a dark side, but it is Proctor who drew it out of her. He indulges her interest in him and in turn, this kick-starts the hysteria in Salem. After the affair is discovered and John realizes his mistakes, he struggles with how he views himself as a husband and a Christian. As John struggles with inner troubles, disaster starts brewing in the village. This is because, he is not the only one left with internal conflicts. Abigail becomes extremely attached to the fantasy she has lived out with him, causing her to drink charms and start the issue of witchcraft in Salem.

Furthermore, Proctor struggles against his own pride and conscience throughout the trials, and this prolongs the issues the town faces. As Abigail and the other girls continue to accuse people in the town of devilish acts, John feels major conflict about coming forward. At first, John is likely to not say anything to the judges, in order to protect his reputation. The fact that he is willing to put the lives of people in his town at risk rather than admit his wrong-doings, shows the major flaws in his character. However, he is pushed towards outing the truth when his wife is accused of witchcraft. Cheever comes to Proctor’s house with a warrant for her arrest and says, “Abigail Williams charge her” (Miller 73). John knows that his wife Elizabeth was only charged so she may be hanged and Abigail could be with him. John says as Elizabeth was arrested, “Is the accuser always holy now?” (Miller 77). John knew that Abigail was falsely accusing everyone of witchcraft, but does not immediately come forward with his proof so his reputation could be protected. However, he makes it a point to expose Abigail when his wife is arrested. Readers see a different and more loving and concerned side to John at this moment. If Proctor had come forward with his knowledge earlier though, perhaps his wife and others in the town could have been spared of the humiliation of being accused, and lives could have been saved.

Eventually, John’s love for his wife overcomes his pride complex. John goes to court with Mary Warren to talk to Judge Danforth, he explains why Abigail should be discredited and why his wife is innocent. Mary tells Danforth, “It were pretense, sir” (Miller 89). Urging Mary to testify to save his wife allows yet another glimpse into John’s desperately hidden empathetic side. In addition, he brings his sin to light, but this backfires when his wife lies and says she had no knowledge of the affair. John claims she knows about his cheating, however Elizabeth only claims “she disatifated me- and my husband” (Miller 112). The grave situation John has been placed in finally allows him to get a grasp on just how much he loves his wife, and vise versa. Months later, the day comes for John to hang, he is given the chance to speak to his wife and confess to witchcraft so his death sentence could be lifted. His initial decision is to confess and live, “I want my life” (Miller 137) he says to the court members. At this point, John is trying to find a balance with doing the “right” thing now and with what he has already done. But, after some soul searching, his good will finally overcomes him and he wants to keep his name, so he takes back his confession.

John Proctor’s actions from the very beginning of Arthur Miller’s The Crucible to the very end impacts at what speed the trials moved, and why the trials even happen. Abigail becomes obsessed with John after the affair ends and she drinks charms and dances in the woods, starting the trials. John is responsible for how he damages such a young girl, and for her actions after the fact. Proctor has the chance to come forward with his reasons as to why Abigail is false, but he does do this at first; he could have provoked major changes in the plot if he acted differently. In the end, John Proctor’s conflicting desires to lie and live, or die and be truthful battle against one another one last time, and proves what values he holds in the core of his being. Proctor is introduced into play as a cheating man who indirectly causes one of the most infamous cases of mass hysteria; but slowly changes into a man who speaks the truth and asmilorates some of the pain of the trials, making him and his actions the core cause of the disaster.

John Proctor a One Man Show. (2019, Dec 05). Retrieved from https://papersowl.com/examples/john-proctor-a-one-man-show/