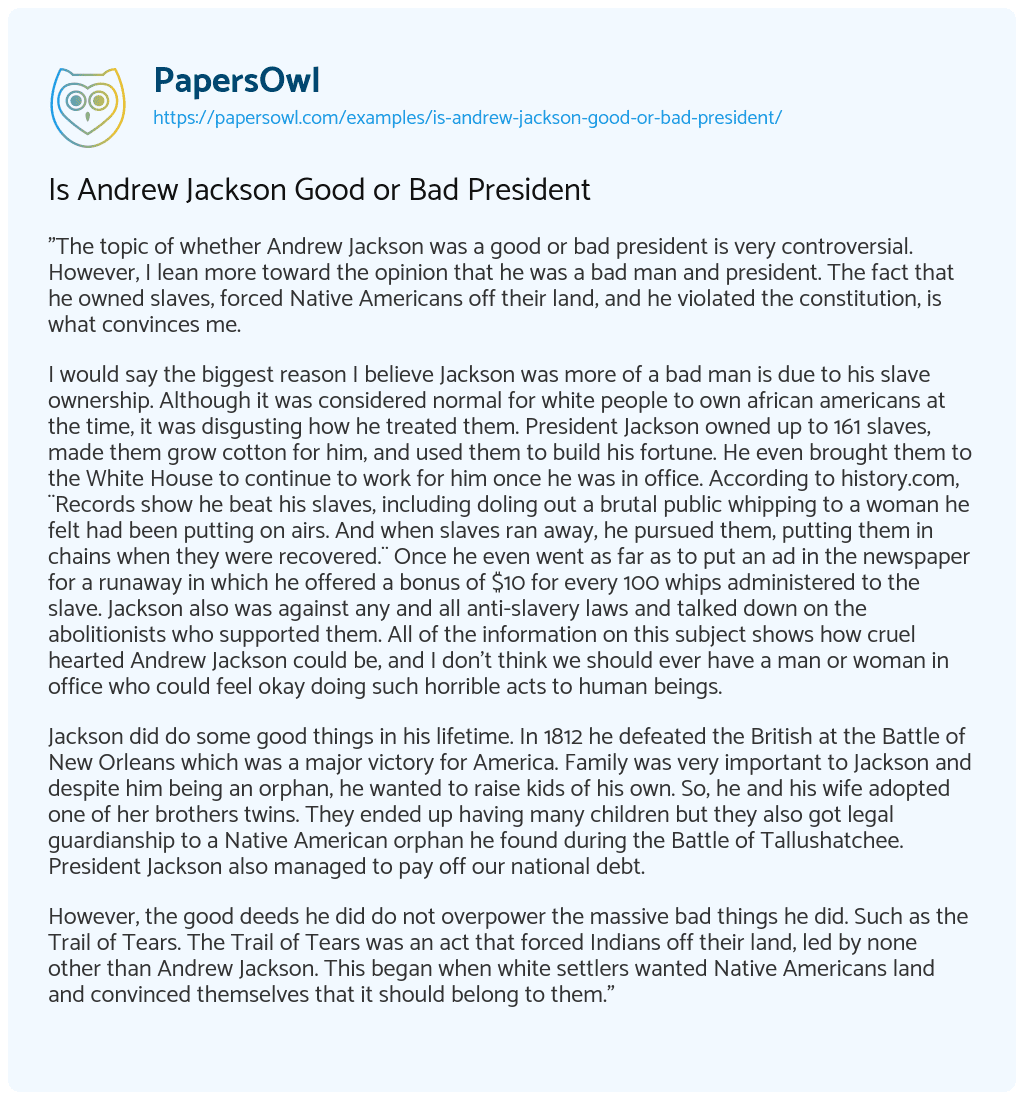 “The topic of whether Andrew Jackson was a good or bad president is very controversial. However, I lean more toward the opinion that he was a bad man and president. The fact that he owned slaves, forced Native Americans off their land, and he violated the constitution, is what convinces me.

I would say the biggest reason I believe Jackson was more of a bad man is due to his slave ownership. Although it was considered normal for white people to own african americans at the time, it was disgusting how he treated them. President Jackson owned up to 161 slaves, made them grow cotton for him, and used them to build his fortune. He even brought them to the White House to continue to work for him once he was in office. According to history.com, ¨Records show he beat his slaves, including doling out a brutal public whipping to a woman he felt had been putting on airs. And when slaves ran away, he pursued them, putting them in chains when they were recovered.¨ Once he even went as far as to put an ad in the newspaper for a runaway in which he offered a bonus of $10 for every 100 whips administered to the slave. Jackson also was against any and all anti-slavery laws and talked down on the abolitionists who supported them. All of the information on this subject shows how cruel hearted Andrew Jackson could be, and I don’t think we should ever have a man or woman in office who could feel okay doing such horrible acts to human beings.

Jackson did do some good things in his lifetime. In 1812 he defeated the British at the Battle of New Orleans which was a major victory for America. Family was very important to Jackson and despite him being an orphan, he wanted to raise kids of his own. So, he and his wife adopted one of her brothers twins. They ended up having many children but they also got legal guardianship to a Native American orphan he found during the Battle of Tallushatchee. President Jackson also managed to pay off our national debt.

However, the good deeds he did do not overpower the massive bad things he did. Such as the Trail of Tears. The Trail of Tears was an act that forced Indians off their land, led by none other than Andrew Jackson. This began when white settlers wanted Native Americans land and convinced themselves that it should belong to them.”

Andrew Jackson – was a Good President

Was President Andrew Jackson a Supervillain