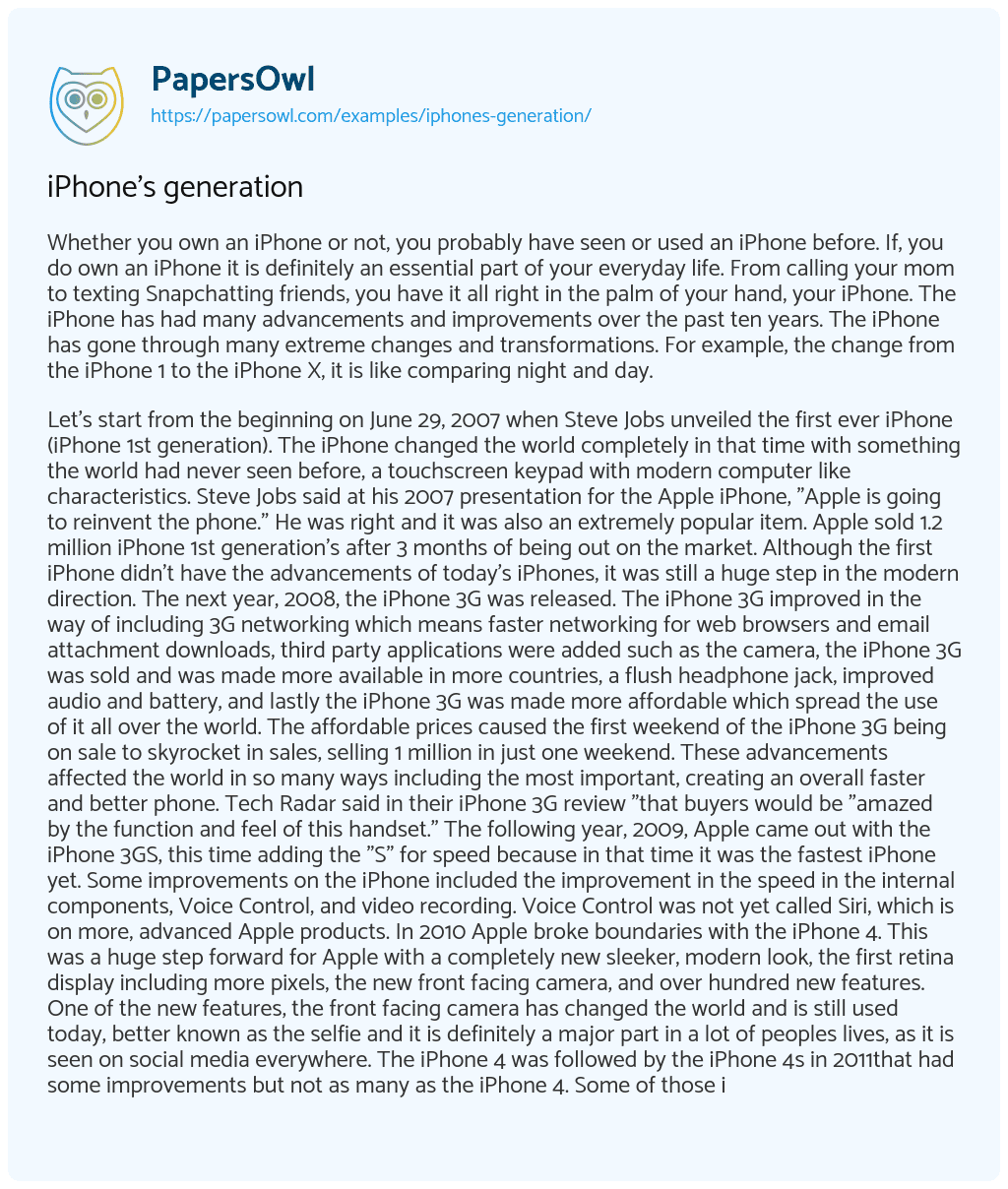 Whether you own an iPhone or not, you probably have seen or used an iPhone before. If, you do own an iPhone it is definitely an essential part of your everyday life. From calling your mom to texting Snapchatting friends, you have it all right in the palm of your hand, your iPhone. The iPhone has had many advancements and improvements over the past ten years. The iPhone has gone through many extreme changes and transformations. For example, the change from the iPhone 1 to the iPhone X, it is like comparing night and day.

Let’s start from the beginning on June 29, 2007 when Steve Jobs unveiled the first ever iPhone (iPhone 1st generation). The iPhone changed the world completely in that time with something the world had never seen before, a touchscreen keypad with modern computer like characteristics. Steve Jobs said at his 2007 presentation for the Apple iPhone, “Apple is going to reinvent the phone.” He was right and it was also an extremely popular item. Apple sold 1.2 million iPhone 1st generation’s after 3 months of being out on the market. Although the first iPhone didn’t have the advancements of today’s iPhones, it was still a huge step in the modern direction. The next year, 2008, the iPhone 3G was released. The iPhone 3G improved in the way of including 3G networking which means faster networking for web browsers and email attachment downloads, third party applications were added such as the camera, the iPhone 3G was sold and was made more available in more countries, a flush headphone jack, improved audio and battery, and lastly the iPhone 3G was made more affordable which spread the use of it all over the world. The affordable prices caused the first weekend of the iPhone 3G being on sale to skyrocket in sales, selling 1 million in just one weekend. These advancements affected the world in so many ways including the most important, creating an overall faster and better phone. Tech Radar said in their iPhone 3G review “that buyers would be “amazed by the function and feel of this handset.” The following year, 2009, Apple came out with the iPhone 3GS, this time adding the “S” for speed because in that time it was the fastest iPhone yet. Some improvements on the iPhone included the improvement in the speed in the internal components, Voice Control, and video recording. Voice Control was not yet called Siri, which is on more, advanced Apple products. In 2010 Apple broke boundaries with the iPhone 4. This was a huge step forward for Apple with a completely new sleeker, modern look, the first retina display including more pixels, the new front facing camera, and over hundred new features. One of the new features, the front facing camera has changed the world and is still used today, better known as the selfie and it is definitely a major part in a lot of peoples lives, as it is seen on social media everywhere. The iPhone 4 was followed by the iPhone 4s in 2011that had some improvements but not as many as the iPhone 4. Some of those improvements were enhanced camera and the arrival of Siri. Siri is basically your voice-controlled personal assistant. Also the iPhone 4s was offered to consumers in black and white colors.

Apple’s newest iPhone made in 2012 was a major upgrade when Apple released the iPhone 5 with an all-new design and so many improvements. An extra row of icons was added because of the new thin, tall design. A new lighting connector was added, thinner so it fit the phone better. The iOS software has been updated to take advantage of the taller display. Finally, an aluminum casing for the exterior of the phone. In 2013, Apple added the iPhone 5C and iPhone 5S to the iPhone family. The iPhone 5C is very similar to the iPhone 5 except for the outer color; these colors come in 5 options. The one difference between the iPhone 5 and iPhone 5C is the software. In the iPhone 5C, iOS 7 was launched allowing for multitasking in between apps and the control center. These iPhones I believe have paved the pathway to many of the iPhones today, such as the iPhone 7 and iPhone X. next, the iPhone 5S includes several modern and so advanced advancements that have helped the world, such as, the fingerprint to unlock your iPhone. The fingerprint to unlock your iPhone has inspired many other companies to do the same.

In 2014, the iPhone 6 and iPhone 6 Plus launched from Apple. The iPhone 6 included a 4.7-inch display and included more pixels than ever. Apple Pay was added so you can pay at stores by holding near a terminal with your Apple pay account. Another way Apple revolutionized how people look at the world and also how people use their iPhone to change the world. The iPhone 6 Plus has the same iPhone as the regular size iPhone 6 but the size on the iPhones 6 Plus as you can imagine is a lot bigger. The iPhone 6 Plus has a 5.5-inch display. Both designs still inheriting the fingerprint ID from the iPhone 5S. The following year, 2015, Apple released the iPhone 6S and iPhone 6S Plus. The iPhone 6S is almost the same to the iPhone 6, except a little extra thickness and weight. Also, force touch was added and improved ways of looking at your photos with live photos. In 2016, the iPhone SE came out and it wasn’t what everyone was expecting considering it was an iPhone 5s with a larger screen. The iPhone SE wasn’t the biggest hit of 2106 but that was soon to change. The iPhone 7 came out later in 2016 and the iPhones keep getting better and more diverse. The iPhone 7 and iPhone 7 Plus has also a new glossy or matte finish with a new camera and a water and dust resistance. There’s a new home button with so many uses now more than ever. The home button is now used for multitasking, Siri, accessibility, touch ID, reachability, and Apple Pay. The new camera has a 6 layer lenses so your images come out clearer with 50% more light from the flash with a true tone flash as well. Finally the built in speaker in the iPhone 7 and iPhone 7 Plus have been upgraded to dual stereo speakers for a louder and a clearer audio sound from this iPhone. The last and newest iPhone from Apple is by far the most advanced and modern iPhone of the year and out of all the iPhones. The iPhone X has so many achievements that have affected the world today, such as, the most effective and excellent software that comes with Face ID. You can unlock your iPhone with just your face when you face the screen towards you. Also, the all display look gives u a full screen view. Since it is all display that means no home button so a single wipe up unlocks your iPhone X along with Face ID. The front and rear facing cameras have portrait mode, which allows you to define the light in a scene that really gives you the effect that you’re actually in a studio taking a photo. This iPhone truly has it all.

Every iPhone from the iPhone first generation to the iPhone X has paved the way fro each iPhone in front of it. As you can see every advancement in the iPhone it keeps getting better and better by every generation, every software update and so much more. I can’t wait to see the next Apple iPhone because in my opinion I don’t know what can top the iPhone X and that’s all because of previous iPhones in front of it. This is how the evolution of the Apple iPhone affects future iPhones.

The IPhone and all of its Capabilities

The Evolution of the IPhone