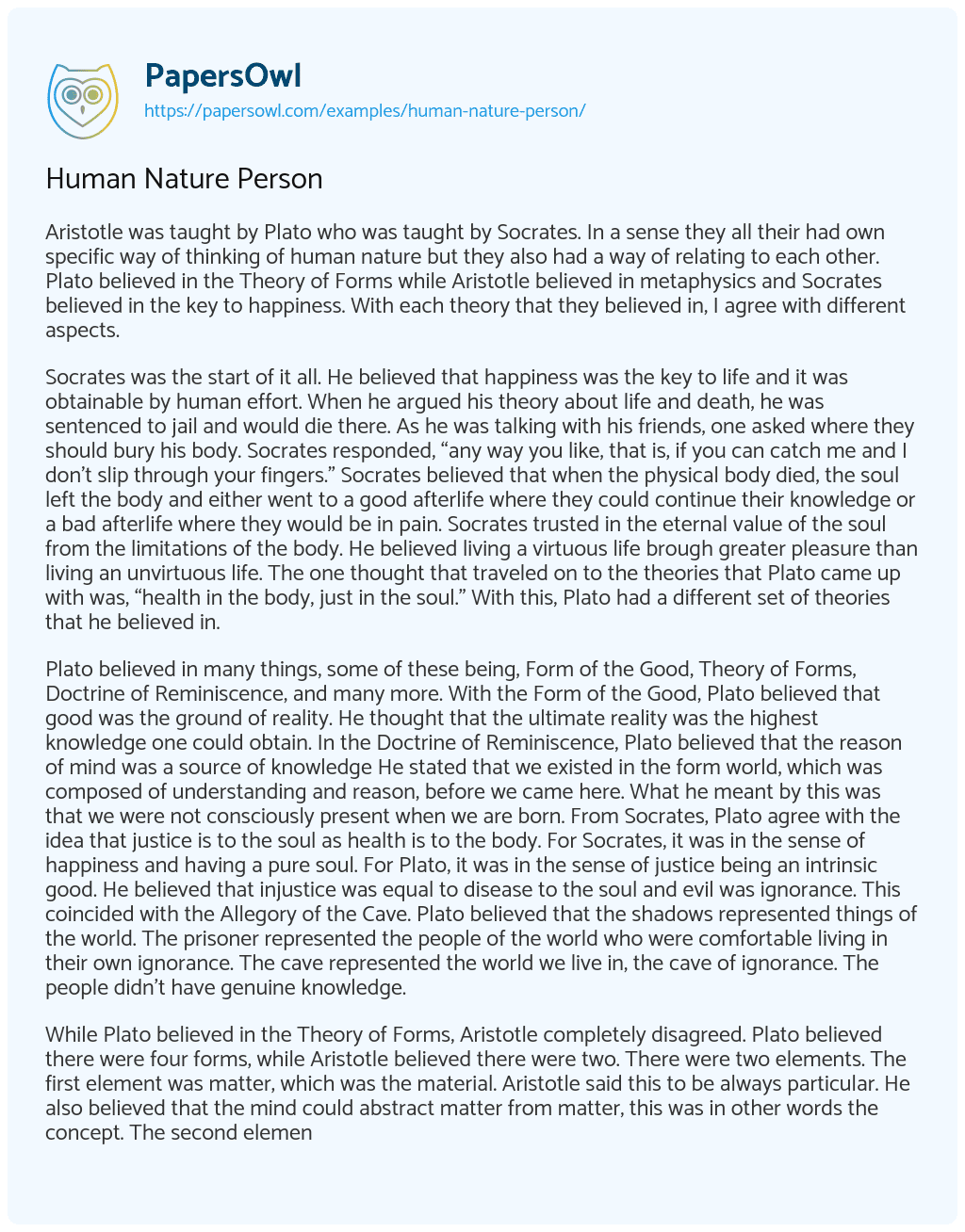 Aristotle was taught by Plato who was taught by Socrates. In a sense they all their had own specific way of thinking of human nature but they also had a way of relating to each other. Plato believed in the Theory of Forms while Aristotle believed in metaphysics and Socrates believed in the key to happiness. With each theory that they believed in, I agree with different aspects.

Socrates was the start of it all. He believed that happiness was the key to life and it was obtainable by human effort. When he argued his theory about life and death, he was sentenced to jail and would die there. As he was talking with his friends, one asked where they should bury his body. Socrates responded, “any way you like, that is, if you can catch me and I don’t slip through your fingers.” Socrates believed that when the physical body died, the soul left the body and either went to a good afterlife where they could continue their knowledge or a bad afterlife where they would be in pain. Socrates trusted in the eternal value of the soul from the limitations of the body. He believed living a virtuous life brough greater pleasure than living an unvirtuous life. The one thought that traveled on to the theories that Plato came up with was, “health in the body, just in the soul.” With this, Plato had a different set of theories that he believed in.

Plato believed in many things, some of these being, Form of the Good, Theory of Forms, Doctrine of Reminiscence, and many more. With the Form of the Good, Plato believed that good was the ground of reality. He thought that the ultimate reality was the highest knowledge one could obtain. In the Doctrine of Reminiscence, Plato believed that the reason of mind was a source of knowledge He stated that we existed in the form world, which was composed of understanding and reason, before we came here. What he meant by this was that we were not consciously present when we are born. From Socrates, Plato agree with the idea that justice is to the soul as health is to the body. For Socrates, it was in the sense of happiness and having a pure soul. For Plato, it was in the sense of justice being an intrinsic good. He believed that injustice was equal to disease to the soul and evil was ignorance. This coincided with the Allegory of the Cave. Plato believed that the shadows represented things of the world. The prisoner represented the people of the world who were comfortable living in their own ignorance. The cave represented the world we live in, the cave of ignorance. The people didn’t have genuine knowledge.

While Plato believed in the Theory of Forms, Aristotle completely disagreed. Plato believed there were four forms, while Aristotle believed there were two. There were two elements. The first element was matter, which was the material. Aristotle said this to be always particular. He also believed that the mind could abstract matter from matter, this was in other words the concept. The second element was the form, which gives something its nature or essence. Aristotle believed this to be the living entity which was the soul. Matter and form put together makes the living thing.

To me, I understand human nature as the nature vs. nurture. When thinking about what Socrates said about the soul, the body, and the afterlife, this made me think of religion and the Bible. From the way I was raised, nurture, I believe that when you die, your soul leaves your body, but it depends on how you lived your life, where you go after then. If you lived a good life and your soul was pure, then your afterlife would be good in the sense you would go to Heaven. If you lived your life in a foul way and your soul wasn’t pure, then your afterlife would be bad in the sense that you would go to Hell. All three philosophers’ theories together in one, I can take something from each and agree with it. In the end, I believe that nature and nurture plays a big role in your life.