World War i and the Nature of Man 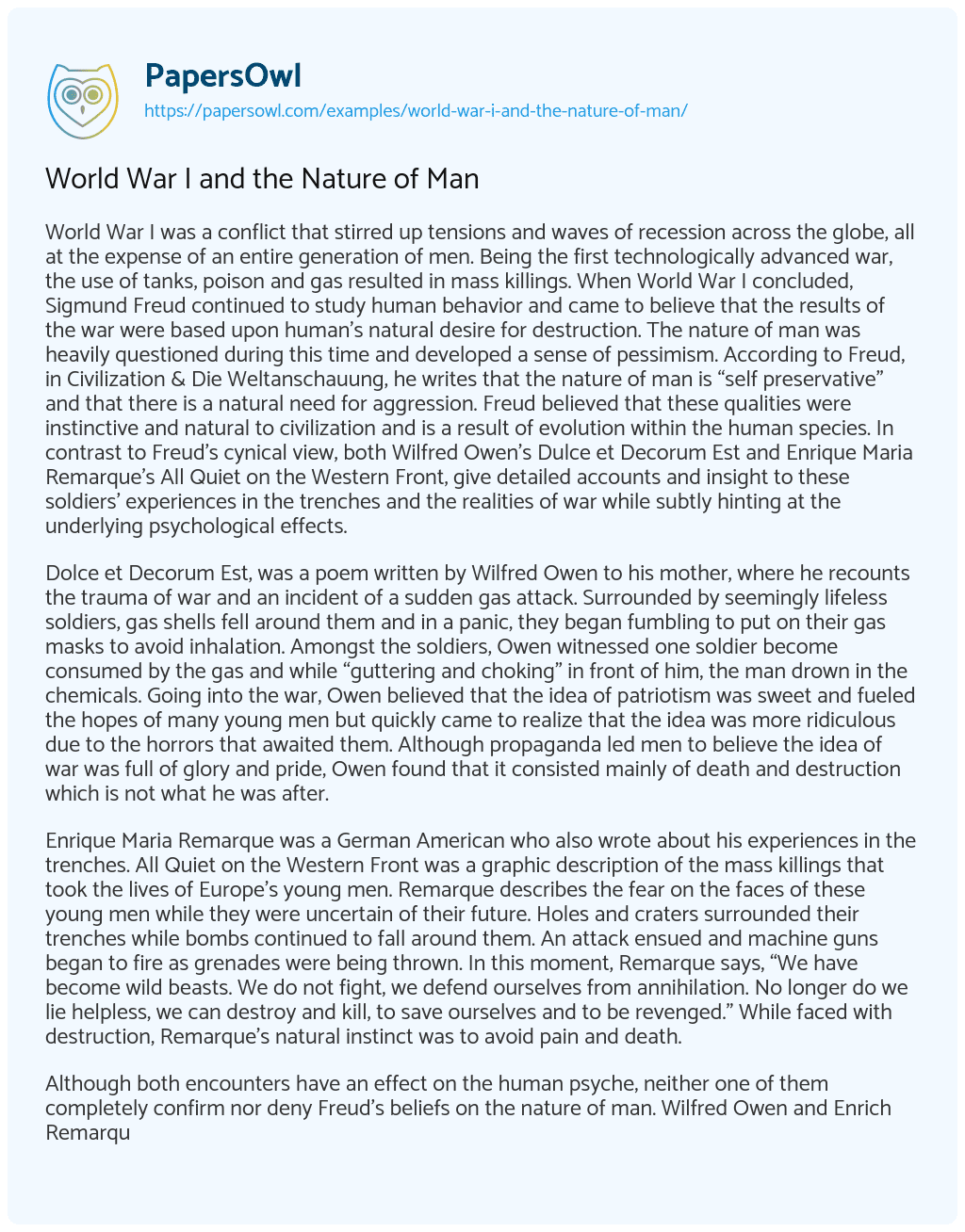 World War I was a conflict that stirred up tensions and waves of recession across the globe, all at the expense of an entire generation of men. Being the first technologically advanced war, the use of tanks, poison and gas resulted in mass killings. When World War I concluded, Sigmund Freud continued to study human behavior and came to believe that the results of the war were based upon human’s natural desire for destruction. The nature of man was heavily questioned during this time and developed a sense of pessimism. According to Freud, in Civilization & Die Weltanschauung, he writes that the nature of man is “self preservative” and that there is a natural need for aggression. Freud believed that these qualities were instinctive and natural to civilization and is a result of evolution within the human species. In contrast to Freud’s cynical view, both Wilfred Owen’s Dulce et Decorum Est and Enrique Maria Remarque’s All Quiet on the Western Front, give detailed accounts and insight to these soldiers’ experiences in the trenches and the realities of war while subtly hinting at the underlying psychological effects.

Dolce et Decorum Est, was a poem written by Wilfred Owen to his mother, where he recounts the trauma of war and an incident of a sudden gas attack. Surrounded by seemingly lifeless soldiers, gas shells fell around them and in a panic, they began fumbling to put on their gas masks to avoid inhalation. Amongst the soldiers, Owen witnessed one soldier become consumed by the gas and while “guttering and choking” in front of him, the man drown in the chemicals. Going into the war, Owen believed that the idea of patriotism was sweet and fueled the hopes of many young men but quickly came to realize that the idea was more ridiculous due to the horrors that awaited them. Although propaganda led men to believe the idea of war was full of glory and pride, Owen found that it consisted mainly of death and destruction which is not what he was after.

Enrique Maria Remarque was a German American who also wrote about his experiences in the trenches. All Quiet on the Western Front was a graphic description of the mass killings that took the lives of Europe’s young men. Remarque describes the fear on the faces of these young men while they were uncertain of their future. Holes and craters surrounded their trenches while bombs continued to fall around them. An attack ensued and machine guns began to fire as grenades were being thrown. In this moment, Remarque says, “We have become wild beasts. We do not fight, we defend ourselves from annihilation. No longer do we lie helpless, we can destroy and kill, to save ourselves and to be revenged.” While faced with destruction, Remarque’s natural instinct was to avoid pain and death.

Although both encounters have an effect on the human psyche, neither one of them completely confirm nor deny Freud’s beliefs on the nature of man. Wilfred Owen and Enrich Remarque both experienced horrific events while on the battlefield but both had very different reactions. Owen seemed to quickly realize that war was not heroic or glorious but was agony. Owen found himself surrounded by a nightmare but was not one to search for destruction, which is what Freud believed was sought out by all humans. Remarque on the other hand, did not seek destruction but was faced with death and had to protect himself against the enemy. While Freud mentions in Civilization & Die Weltanschauung that humans have a natural desire for aggression and pleasure, mans ultimate impulse is to avoid pain which was precisely what Remarque was trying to escape. Overall, a natural desire for glory and pride seem to be more sufficient.

World War I and the Nature of Man. (2021, Mar 09). Retrieved from https://papersowl.com/examples/world-war-i-and-the-nature-of-man/

War is not Part of Human Nature

Different Ideas of Wilfred own

The Question of Human Nature

The Nature of Crime during World War II

The Nature of Crime during World War II