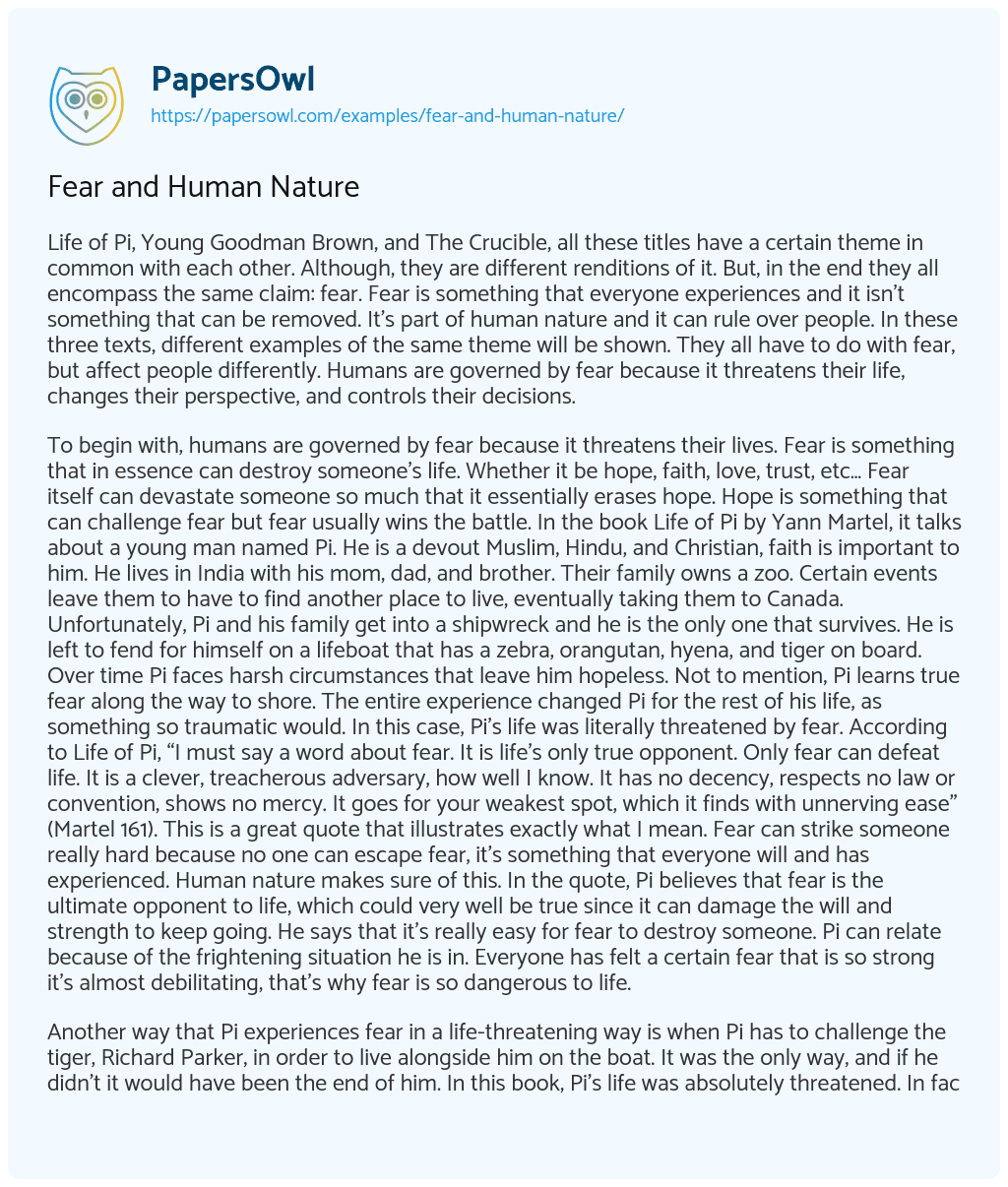 Life of Pi, Young Goodman Brown, and The Crucible, all these titles have a certain theme in common with each other. Although, they are different renditions of it. But, in the end they all encompass the same claim: fear. Fear is something that everyone experiences and it isn’t something that can be removed. It’s part of human nature and it can rule over people. In these three texts, different examples of the same theme will be shown. They all have to do with fear, but affect people differently. Humans are governed by fear because it threatens their life, changes their perspective, and controls their decisions.

To begin with, humans are governed by fear because it threatens their lives. Fear is something that in essence can destroy someone’s life. Whether it be hope, faith, love, trust, etc… Fear itself can devastate someone so much that it essentially erases hope. Hope is something that can challenge fear but fear usually wins the battle. In the book Life of Pi by Yann Martel, it talks about a young man named Pi. He is a devout Muslim, Hindu, and Christian, faith is important to him. He lives in India with his mom, dad, and brother. Their family owns a zoo. Certain events leave them to have to find another place to live, eventually taking them to Canada. Unfortunately, Pi and his family get into a shipwreck and he is the only one that survives. He is left to fend for himself on a lifeboat that has a zebra, orangutan, hyena, and tiger on board. Over time Pi faces harsh circumstances that leave him hopeless. Not to mention, Pi learns true fear along the way to shore. The entire experience changed Pi for the rest of his life, as something so traumatic would. In this case, Pi’s life was literally threatened by fear. According to Life of Pi, “I must say a word about fear. It is life’s only true opponent. Only fear can defeat life. It is a clever, treacherous adversary, how well I know. It has no decency, respects no law or convention, shows no mercy. It goes for your weakest spot, which it finds with unnerving ease” (Martel 161). This is a great quote that illustrates exactly what I mean. Fear can strike someone really hard because no one can escape fear, it’s something that everyone will and has experienced. Human nature makes sure of this. In the quote, Pi believes that fear is the ultimate opponent to life, which could very well be true since it can damage the will and strength to keep going. He says that it’s really easy for fear to destroy someone. Pi can relate because of the frightening situation he is in. Everyone has felt a certain fear that is so strong it’s almost debilitating, that’s why fear is so dangerous to life.

Another way that Pi experiences fear in a life-threatening way is when Pi has to challenge the tiger, Richard Parker, in order to live alongside him on the boat. It was the only way, and if he didn’t it would have been the end of him. In this book, Pi’s life was absolutely threatened. In fact, he caved in and lost complete hope of survival at certain times. But in the end, Pi managed to overcome the Richard Parker situation by making a decision on how to handle it. It was hard for him in many ways, the journey completely changed him as a person. Although, not everyone comes out victorious. Fear can cripple someone immensely and it is perfectly shown in this book. It’s something that can not change without any other help. In this case, for Pi, it was his religion. His faith ultimately saved him from a painful death. The author, Yann Martel, wanted to represent how powerful fear is and how to combat it in different ways. For Pi, it was most likely hope or faith. The author shows the struggles of being in situations like the one Pi was in, and how it can affect someone.

Next, humans are governed by fear because it changes their perspective. Fear can completely change your views on certain things because of how strong it can be. When that happens, the risk of relationships deteriorating increase greatly. Like in the prior example with Pi, his views on life and death changed greatly after these traumatic events. An example of this fear completely changing the mindset of someone after it reaches them, is in the book “Young Goodman Brown”. Young Goodman Brown is a good devout Christian with a loving wife named Faith. One day, Goodman Brown gets tempted into the forest and leaves his wife Faith behind. He is lured into the forest where he finds all of the people from his village participating in a ritual with the devil. He is completely shocked and dumbfounded then. Later on, though, he wakes up out of the forest and assumes it was a dream. But now he can not shake the possibility of it being a true situation that he was in. He then subconsciously judges or resents all of the people in his village for something that he is not entirely sure happened. He lives like that for the rest of his life. This is symbolized with the loss of his wife Faith, who begged him not to go. After this experience he believes that the villagers and friends are hypocrites for preaching the word of God after they supposedly danced in the woods with the devil. This demonstrates the impact that fear can have on your perspective, whether that be your views on people, situations, yourself, etc… It can be really powerful and change your life. Just like the sheer unsurety that Young Goodman Brown had, had ruined his entire life. It most likely left him a paranoid state. In this situation, having to do with religion and certain acts being “off limits,” the fear was a lot stronger than normal. His attitude towards his life-long friends completely shifted in a matter of days. This is a great way of showing how fearing something can change your perspective rapidly. It looks like the author, Arthur Miller, wanted to show how easily fear can shift your thoughts and views. When fear is involved it seems like everything changes, and it does.

Finally, humans are governed by fear because it controls their decisions. This can be shown in many ways, whether it be what you say, how you react, what act you commit, etc… Fear is such a powerful component to life itself that it’s no surprise humans are ruled by it. Like in the story Young Goodman Brown, fear changed his way of thinking and impacted his decisions thereron. In the book The Crucible, about Puritans living in Salem, Massachusetts, they start accusing fellow neighbors because of personal issues they have had. Another prominent issue in The Crucible was with Abigail Williams and John Proctor. Abigail Williams is a selfish and evil girl who will go to any means necessary to get what she wants. John Proctor was a good man with good values who truly loved his wife and family. Unfortunately, Abigail and John Proctor had committed adultery, but Proctor realized that he made a mistake so he left. Out of fear, Abigail wanted to make sure that John Proctor was hers. She decided to go dancing in the forest and go cast spells on Elizabeth Proctor, John Proctor’s wife. Elizabeth Proctor was devout to her religion and had never told a lie in her life. She was a good woman like her husband, their relationship although, could be described as cold or distant which seemed to be the downfall of their marriage at the time. Abigail was furious and afraid that she couldn’t be with John Proctor, so this caused her to act out of pure fear and frustration. She eventually accused Elizabeth Proctor of witchcraft and had her in line to hang at the gallows. This shows how fear can control people’s decisions because out of her fear for “losing” John Proctor.

Another major example of this from The Crucible are the actual witch trials that were held in Salem. This is a different kind of fear, it’s conflicting and can be a result of personal choices that other people made. For example, all of the villagers in Salem were deathly afraid of the forest, or anything to do with the devil for that matter. They were willing to use drastic measures just to feel safer. This is said because they wanted to understand things that were happening around them that initially scared them. They needed to tie it to something that they did know about, which was religion. Now for Abigail, she tried to shift the blame onto others for her own actions in fear of being found out. It drove her to do some evil things. She started to accuse others to shift the blame, and also get some things in return from the whole situation. This not only impacted her and her victims, it impacted the whole village. It made all of them suspicious and even scared of her afterwards. Much like the story of “Young Goodman Brown,” fear changed the way that he saw people in his village, like how the people of the village of Salem had different views of Abigail after the incidents. The author, Arthur Miller, was trying to express that being afraid can impact so many people because it impacts your decisions that ultimately impact others.

To conclude this essay, humans are in fact governed by fear because it threatens life itself, as shown with Life of Pi, it changes their perspective, shown with “Young Goodman Brown”, and it controls their decision, shown with The Crucible. All of these texts show how fear can control a person’s life, and that no one can escape it because it’s human nature. These texts differ from each other but have the same “goal” or theme within them. It’s the power of fear, and how it affects them in different ways. All the authors were trying to show how fear affects people and how they are all ruled by it.